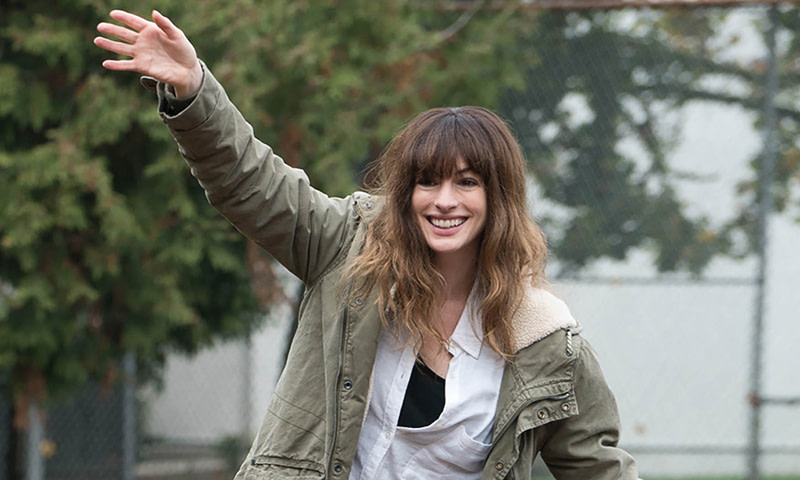 Anne Hathaway appears in Colossal by Nacho Vigalondo, an official selection of the Spotlight program at the 2017 Sundance Film Festival. Courtesy of Sundance Institute.

After the seemingly unstoppable tide of superhero movies and big-budget remakes finally stops soaking up money in the box office, it will be films like Nacho Vigalondo’s Colossal that pick up where they leave off. Colossal strikes the near-perfect balance between the nostalgic geekdom of our childhoods and the tragic, everyday pitfalls of our adulthoods. Any sci-fi nerd will tell you that the monsters that we fell in love with as kids are metaphors for the unconquerable onslaught of adulthood, and it’s Vigalondo’s understanding of that dynamic that makes Colossal so spectacular.

At first glance, it’s unclear how the appearance of a gigantic reptilian creature above the skyline of Seoul, South Korea is connected to the drunken antics of a New York city girl named Gloria (Anne Hathaway). That’s part of Colossal’s initial fun—we know that we’re going to see kaijus, but we don’t know exactly how Gloria is involved. The facets of this mystery reveal themselves at just the right pace. After Gloria gets booted out by her boyfriend Tim (Dan Stevens) she packs up and seeks refuge in her old hometown. In between narcoleptic episodes, Gloria reconnects with Oscar (Jason Sudeikis), a friend from her childhood. As the two become closer, Gloria eventually unravels her connection with the beast that has begun terrorizing Seoul.

This is where the film sets you up to think that this is where Oscar’s laid back charm and solid beard game will tango with Gloria’s effortless beauty and big brown eyes as they rekindle old flames while solving a cosmic mystery. We’re supposed to think that the pair will fall in love and drive Oscar’s pickup truck into the sunset. But, despite its sci-fi undertones, this is a film about real life. Unpredictable, unfair and unhappy real life.

If there is one thing to gripe about while watching Colossal, it’s that the film’s first and second halves are very different tonally. In other films, this tends to happen because screenwriters lose control of their story. In this case, it’s precisely what Vigalondo wants. The tonal change falls into place like subliminal dominoes, eventually becoming personified by Sudeikis’s surprising character arc. The story starts to veer into dramatic territory about emotional abuse, alcoholism and depression. Both Hathaway and Sudeikis excel at bringing their characters through this abyss, along with an excellent supporting cast that includes Time Blake Nelson and Austin Stowell.

The end result of Colossal is a film that takes a close look at how seemingly trivial childhood traumas can plant the seeds of full-blown dysfunction. It’s the insightful work of a talented dramatist wrapped up in the universal appeal of giant, city-leveling creatures. The metaphor that Vigalondo establishes between titanic engines of destruction and the irresponsible, unplanned damage that alcoholism and self-loathing inflict on those around us is profound.

Despite the serious and sometimes bleak thematic elements that are present in Colossal, it’s not a film that punishes its audience. Even when the film takes us past the initially likable personalities of its characters into the darkness that lies beneath, we still want to see them come around so we can hang out with them back when things weren’t a total mess. And let’s just take a moment to celebrate that final scene when Gloria realizes that the only way to free herself from her psychological shackles is to harness her own destructive impulses. That shit deserves a mid-theater fist pump—no matter who might be looking at you.