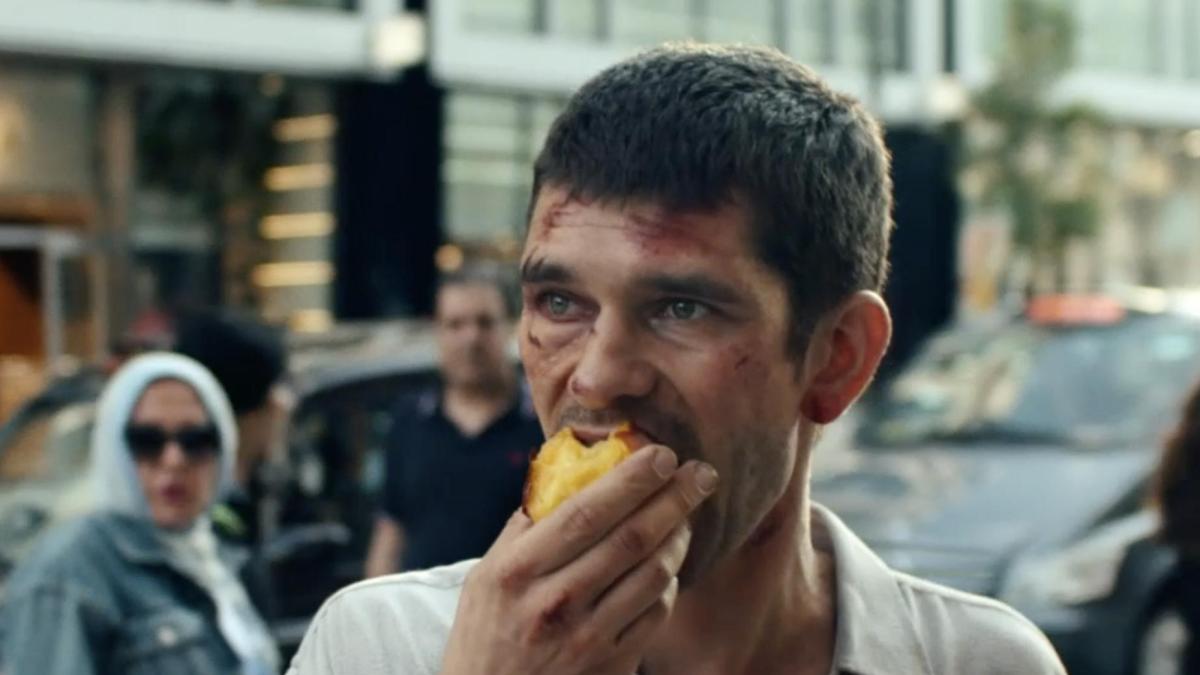 There are many things that are unclear throughout Surge, Aneil Karia’s feature-length directorial debut, chief among them being whether it is a good movie. While that matter may be in doubt, there is no question that the film is an enthralling one. Surge doesn’t read as an exploration of nihilism, but it also doesn’t seem to come to any real conclusions about the progression of its protagonist. What results is approximately 100 minutes of varyingly compelling vignettes and setpieces that function as a praise-worthy acting showcase for lead Ben Whishaw (The Lobster).

Joseph (Whishaw) slogs his way through a monotonous existence, alternating between his job as an airport security guard and heating up microwave dinners at home. In the first 20 minutes, it is difficult to determine whether his life is miserable or simply unremarkable. He has no discernable friends—on his birthday his coworkers are trying to figure out who the cake in the break room is for—and his relationship with his parents seems similarly hollow. It’s during a dinner while Joseph’s parents are chastising him that he nervously bites down on and breaks a glass of water, and something in his mind seems to break with it.

The remainder of the movie takes place the following day, as Joseph’s antisocial behavior progressively escalates, leading to some frightening and hilarious experiences which are not always mutually exclusive. Elements of Joseph’s arc (including his random, inappropriate laughter) bear an uncanny resemblance to Joaquin Phoenix’s Joker (2019), underscoring his menacing interactions with others. The breakneck pacing (and even some elements of the plot) echo the Safdie Brothers’ 2017 thriller Good Time, where things continue to get more and more farcical until the movie reaches an inevitable tipping point.

While the unfolding events could be interpreted as Joseph freeing himself from the tethers of his boring existence, it seems much more apparent that he is progressively becoming unmoored from socially acceptable behavior; one man’s liberation can be easily construed as another’s unhinged rampage. As a result, Joseph’s actions oscillate between harmless troublemaking and serious criminal behavior. The best example of the often absurd escalation of events occurs in the film’s strongest sequence, when Joseph leaves to purchase a cable for a coworker he seems fixated on. A declined credit card sets off a chain reaction that essentially carries Joseph to the film’s conclusion, where he finally seems content. The development seems unearned, as everything leading up to that point can be described as—to avoid using the film’s name—a deranged crusade wreaking havoc across the city.

Surge’s largest flaw is that Joseph isn’t particularly likeable. You understand fairly quickly why he doesn’t have a lot of relationships, so when he starts acting erratically (apparently because of being chastised by his parents), it reads much more as a dangerously unhinged man lashing out at society rather than a sympathetic individual finally taking what is his. In a world fraught with mass shootings, Joseph could read far too easily as an Adam Lanza instead of a Tyler Durden.

All of that being said, Whishaw plays Joseph with incredible menace which genuinely rivals the aforementioned Phoenix performance as the Joker. As it happens more than once in the film, you never know if he is going to laugh and hug somebody or threaten or assault them. There are times where he does them all.

Surge’s failing as a compelling narrative is buttressed by Whishaw’s impeccable performance and one or two wonderful, anxiety-inducing setpieces. While it doesn’t seem to come to any meaningful conclusions for its protagonist, Whishaw makes Surge an enjoyable viewing experience. –Brandon Ermer