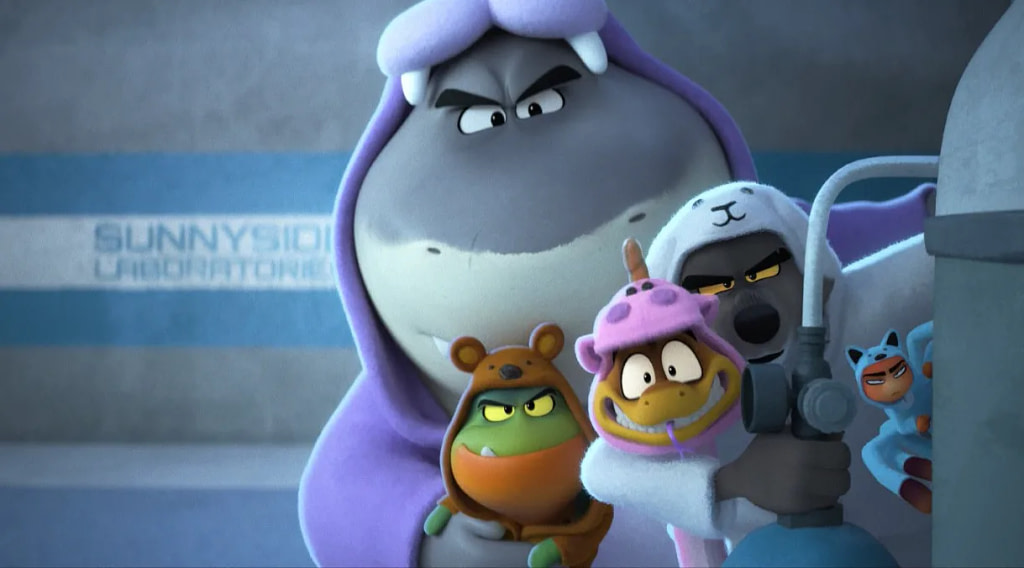 The Bad Guys isn't anything particularly new or innovative, but it's solid entertainment taken on its own merits and worth a rental at the very least. Photo Courtesy of Dreamworks.

The caper comedy is a formula that usually provides some degree of fun, appealing to the part of all of us that fantasizes about breaking all the rules and somehow still being the hero of the story. The Bad Guys takes the mindset of living vicariously through slick, likable rogues to an extreme by literally making them cute and cuddly.

The Bad Guys are a crew of animal outlaws: There’s Mr. Wolf (voiced by Sam Rockwell), the brains and charm or the operation, Mr. Snake (Marc Maron, GLOW), the cynical and selfish safecracker: Mr. Shark (Craig Robinson, The Office, Killing It), a master of disguise. Ms. Tarantula (Awkwafina, The Farewell), an eight-legged hacker goes by the moniker “Webs,” and Mr. Piranha (Anthony Ramos, In The Heights) is the brawn. The fearless five have spent years together pulling off one daring theft after another, until one day they get caught while trying to steal a statue called “The Golden Dolphin”—just as it’s being presented to a philanthropic guinea pig, Professor Rupert Marmalade IV (Richard Ayoade, The IT Crowd). In a moment of desperation, Wolf comes up with a cunning plan: con the big talking, do-gooder guinea pig into proving his theories about nature vs. nurture by reforming the gang. Marmalade agrees to take the thieves into his custody, vowing to turn them around through positive reinforcement.  Of course, this is all an act on Wolf’s part, as the lupine lawbreaker has no interest in being good—or does he?

French animator Pierre Perifel (Bilby, Le Building) makes his feature directorial debut with this stylish romp, and the look of The Bad Guys brings to mind Spider-Man: Into The Spider-Verse in terms of bringing a hand-drawn aesthetic to CGI. The breezy sense of fun owes more than a little to Steven Soderbergh‘s Ocean’s Eleven, a fact so obvious that there are jokes about Wolf “going full Clooney,” whenever he turns on the charm in order to let us know it’s an homage, not a ripoff. The plot is a bit convoluted, and The Bad Guys doesn’t even make an effort at coherent world-building, putting anthropomorphic animals side by side with humans with no explanation.

It’s unlikely that this is going to bother kids much, though, and the brisk pacing doesn’t give you too much time to obsess over such details. The thinner elements of the story may prove a bit more trying for people less easily won over by talking animals than me, but at least it has a plot structure and avoids the “we’re making this up as we go. Look! A koala!”-haphazard feel of the Sing franchise

The voice cast really clicks, with Rockwell and Maron bringing enough charisma to the table on their own. Zazie Beetz (Deadpool 2, The Harder They Fall) shines as Diane Foxington, the Governor of the unnamed … city (see what I mean about world-building?), who just may have a secret or two up her own sleeve. Robinson is always funny when he has remotely decent material to work with, and while Ramos isn’t given enough to do, he does get a solo song. It seems almost redundant that Awkwafina may be the best of all, since the gifted comic star could stand out as a highlight of anything she does, but not even Tom Holland can make a spider more endearing. The dialogue is consistently amusing—if never laugh out loud funny—and what the characters lack in depth they make up for in lovable, rascally charm.

The Bad Guys isn’t anything particularly new or innovative, and it can’t compete with the inspired quality of a Pixar or Phil Lord and Christopher Miller animated adventure, but it’s solid entertainment taken on its own merits. The Bad Guys may not be anything you feel the need to rush out to theaters to see, but I enjoyed it enough to sit through it twice. The 110-minute runtime will either be welcomed by parents or leave them feeling like it’s over too quickly to be worth paying full price, and in that respect it may have been a better streaming. Either way, The Bad Guys is enjoyable family entertainment that is worth a rental at the very least. –Patrick Gibbs