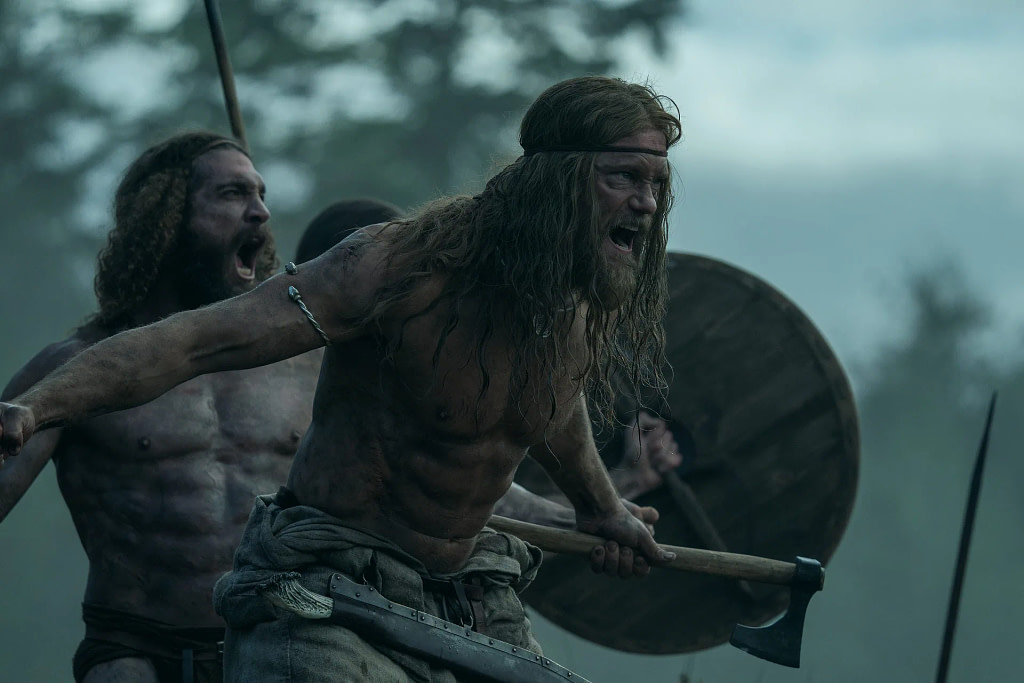 Despite the arthouse cred the Eggers name brings, The Northman didn't stray far enough from Hollywood conventions for my taste. Photo Courtesy of Regency Enterprises.

There’s not much that makes me as aware that my taste has evolved over the years as a blood-and-guts exercise in raging machismo like The Northman. The dark, grisly epic proved to me just how far behind me the days are when I saw Braveheart 10 times in a theater.

The Northman begins in 895 A.D. as King Aurvandill (Ethan Hawke) returns from another campaign to expand his kingdom. The monarch decides it’s time to prepare his son, Prince Amleth, for his destiny as a ruler, immersing him in Norse ceremonies and rituals. Before they can get much further, Amleth’s uncle Fjölnir (Claes Bang) and his men ambush the king, murdering him and stealing away with his wife, Queen Gudrún (Nicole Kidman), leaving young Amlieth alone and enraged. The story then jumps forward to Amleth as an adult, played by Alexander Skarsgård, sporting his best “body by Nautilus” physique.

Amleth spends every moment that he’s not with his personal trainer pillaging and following every lesson he can sound out in The Bloodthirsty and Vengeful Guide To Proving You’re A Good Man. When a Seeress (Björk) tells Amleth that the time to avenge his father’s foul and most unnatural murder is soon at hand, the prince steals aboard a slave ship bound for Iceland—and Fjölnir—going incognito in order to put his circuitous plan into motion. This is a period revenge movie, so two wrongs may not make a right, but hundreds upon hundreds do make a badass.

Robert Eggers (The Lighthouse) is an immensely talented director. He set out to make, in his own words, “the ultimate Viking move.” In most respects, he’s succeeded at doing so. In terms of staging, cinematography and every last painstaking visual detail, The Northman is a marvel to behold. Eggers handles the $70 million budget and the epic scope with such confidence and artistry that he almost instantly emerges as an early Oscar contender. The Northman certainly doesn’t shy away from showing us the shocking brutality of the Viking way, stripped bare of any pretense, but it doesn’t have much to say about it, either, and that’s where it falls short for me.

The Northman, based on a legend that served as one of the inspirations for Hamlet, is still just another dark tale of fierce retribution. While Eggers and his Co-writer, Sjón, do try to throw in some interesting moments that flirt with challenging our so-called hero’s narrow view, they won’t commit to giving us any serious exploration of what a lifetime of single-minded brutality does to a person, instead relying on mysticism and mythology in the final third to avoid pondering any moral and psychological conundrums.

It doesn’t help matters that Skarsgård—who is doing an eerie, spot-on vocal impersonation of his father, actor Stellan Skarsgård—is far more suited to showing off how many people he can kill while he’s naked than anything approaching nuanced acting, and Ameth remains a stoic and dull figure throughout. Anya Taylor-Joy, who previously worked with Eggers in The Witch, is a nice selling point as Olga, an enslaved young woman who takes a liking to the striking Viking, but she isn’t given much of a character, either. Kidman has, by far, the most interesting character, even with limited screen time, and Claes Bang may have a name that sounds like a Shane Black movie, but he’s a strong presence.

There are moments in the middle section where it feels like The Northman might be going somewhere bold and interesting with developments involving these characters, but that might have created a reason to feel invested in the outcome of this story and thus has no place in this movie. Eggers resists making the Unforgiven of Viking movies, however, and is more interested in proving that he can outdo Mel Gibson when it comes to portraying creatively grotesque butchery than in pondering consequences. The Northman reaches a point where some of the violence had me feeling that you could replace Skarsgård with Danny Trejo and call the movie Machete Kicks Ice.

I have no difficulty in describing The Northman as a towering achievement in technical filmmaking, but I can’t bring myself to consider it to be much more than a deftly executed exploitation flick. While Eggers stops short of worshiping his protagonist as a demigod hero like we do often see in the genre, whether we choose to see Amleth as a hero, a villain or a tragic figure, we’re clearly meant to be entertained by watching him butcher his enemies in ways that would make William Wallace and Conan the Barbarian shield their eyes.

Despite the arthouse cred the Eggers name brings, The Northman didn’t stray far enough from Hollywood conventions for my taste. The school of thought here is still that while up-close and personal warfare is brutal and sadistic, it’s manly-as-hell and a lot of fun to watch—as long as the popcorn doesn’t run out. –Patrick Gibbs


Read reviews of more films with a “manly-as-hell and a lot of fun to watch” ethos:
Film Review: Blacklight
Film Review: Ambulance