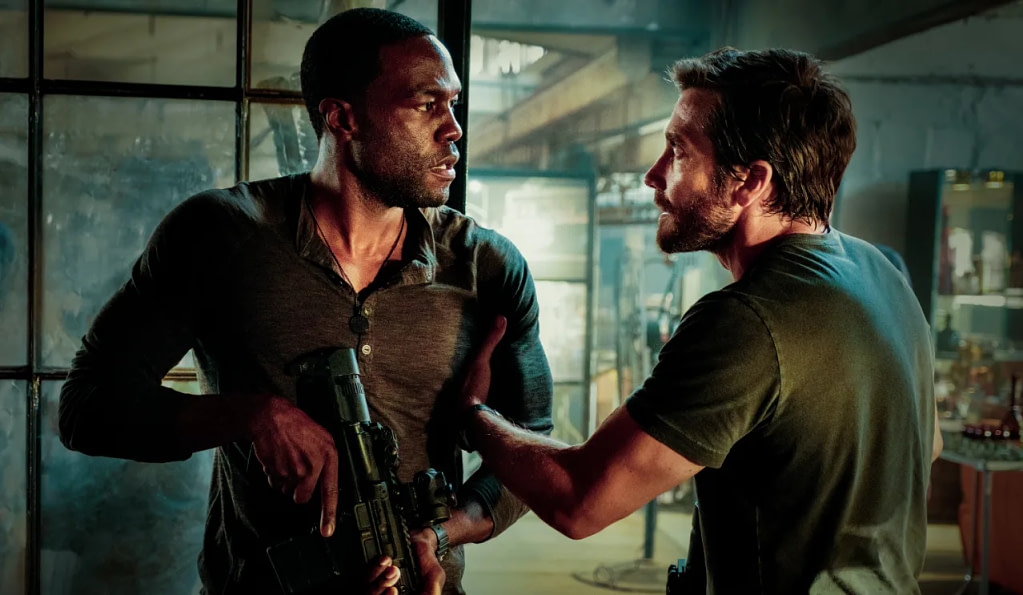 Ambulance works only in the sense that the title tells its whole story: a loud, irritating noise warning us to get out of the way, letting it pass us by. Photo Courtesy of New Republic Pictures and Bay Films

There’s a part of me that really misses the action of the late ’80s and the ’90s—movies like Speed and the second and third Die Hard films. The new Michael Bay vehicle, Ambulance, is an attempt at a high-speed, adrenaline-filled throwback to that era of filmmaking

In Ambulance Yahya Addul-Mateen II (Candyman, The Matrix Resurrections) plays Will Sharp, an Army veteran who needs $231,000 for his wife’s experimental surgery. Will goes to see his adoptive brother Danny, (Jake Gyllenhaal) a career criminal who talks Will into helping out with a $32 million bank heist. During the robbery Will accidentally shoots a police officer and soon the LAPD arrives and shoots down the whole crew except Will and Danny. The brothers hijack an ambulance with an EMT, Cam Thompdon (Eiza Gonzalez, Godzilla vs. Kong), on board, and the chase is on.

The first problem here is that Bay isn’t the director who defined action in the ’90s, he’s the director who destroyed it. The frenetic, MTV-meets-Norman Rockwell style of films like The Rock and Armageddon sidetracked the genre and brought in big audiences, but they are so overblown, noisy and full of cardboard characters that it gave the genre a bad name. The second problem is that Ambulance wants to be a high-octane race-through-the-streets movie like Speed, but it ignores the fact that a big part of what made Speed so easy to embrace was that the excitement came through intensity and narrow escape, not through sadistic violence and constant, automatic weapons fire. Bay does manage to make the chases undeniably impressive, but he bombards us with his signature style from the constantly-moving but never-motivated low-angle shots of slow motion flag waving, blood spurting and raging machismo. Bay seems oblivious of the fact that when you keep restaging the same shots for over 30 years, they become an embarrassing self-parody.

Gyllenhaal is clearly having fun, which makes it all the more frustrating that he’s been given such a weak and vague character. If the movie was going to work on any level, Danny needed to be the kind of roguish character whose confidence and charm make us root for him even when we know we shouldn’t. Instead, Bay has him spitting out his dialogue like a machine gun, and he never displays any ingenuity or leadership ability to make us buy into the character. Addul-Mateen II is given the more sympathetic role, but his character’s repeated idiotic choices, combined with only the most basic of setup, make him difficult to care about as well, and Bay tries unconvincingly to absolve Will of any responsibility for his actions.

The bloated two hour and 16 minute runtime of Ambulance—which, by the way, is a remake of a German film that was only 80 minutes long—is especially insufferable when you consider that a bit of that time could have been taken to establish an emotional bond between Danny and Will that would have made their rapport feel even a tiny bit real. Gonzalez isn’t bad, but she’s a woman in a Michael Bay movie, which means that she’s used as a prop most of time—though I will say that because she’s s moving vehicle most of the time, she manages to avoid being ogled by the camera as much as the Bay babes of yore. The cops, led by Garrett Dillahunt (Raising Hope, Army of the Dead) as Captain Monroe, are stock he-men who spout cliches and literally quote Michael Bay movies, the latter point being the most self congratulatory, a distracting and reality-bending indulgence I’ve not seen a director stoop to in a long time.

The plot holes come at us faster than a speeding ambulance, from the lack of need to refuel to the wounded police officer nearly bleeding out until Will saves him with a transfusion. Will gives him enough blood that Officer Zach (Jackson White) regains full consciousness, but Will can still drive at whiplash-inducing speeds without ever losing control. Now, obviously, movies such as Speed required plenty of suspension of disbelief, but the key making that work is a sense of fun that makes it all forgivable. The script by Chris Fedak tries to rush us through heavy, human drama and past family trauma, as well as a misguided subplot involving a drug cartel who are only there to give our heroes someone to callously gundown. That’s not fun, and it’s not action: It’s just chaos with a liberal dosage of sadism.

Ambulance works only in the sense that the title tells its whole story: a loud, irritating noise warning us to get out of the way, letting it pass us by so we may get on with our lives. –Patrick Gibbs

Read review of action films we think worked:
Film Review: Everything Everywhere All At Once
Film Review: The Matrix Resurrections