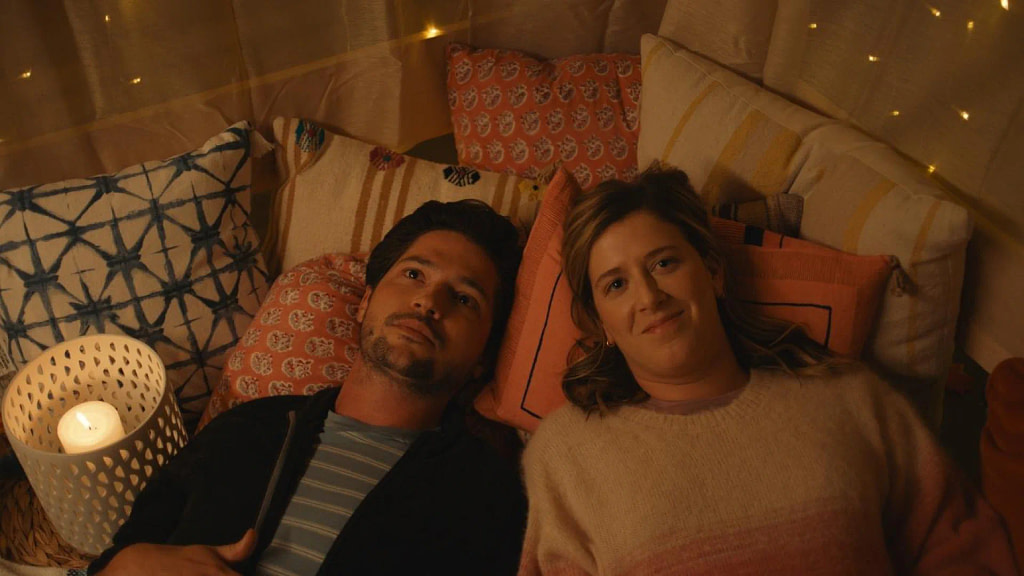 How far would you go to win the approval of your future in-laws? This question is at the heart of Simchas and Sorrows, a new film from Genevieve Adams. Photo Courtesy of Term Paper Productions and Ataria Pictures

Simchas and Sorrows Finds Comedy In Relationships and Religion

How far would you go to win the approval of your future in-laws? This question is at the heart of Simchas and Sorrows, a new film from Genevieve Adams making its premiere this week as a Spotlight Event at Cinejoy, the virtual showcase for the Cinequest Film Festival in San Jose, California, running April 1–17. The film features Broadway icons John Cullum and Chip Zien as part of a stellar ensemble.

In Simchas and Sorrows, Adams stars as Agnes, a young atheist woman who becomes engaged to the love of her life, Levi (Thomas McDonell, The 100). When a surprise pregnancy prompts the couple to get moving on the wedding, Agnes begins the process of converting to Judaism in order to please Levi’s conservative family. Adams makes her directorial debut after writing and starring in the coming-of-age comedy I’m Obsessed With You (But You Need To Leave Me Alone) and continues the themes of relationships, religion and identity that she explored in that film, this time taking a deep dive into a subject that has always been of great interest to her.

“I went to Catholic school growing up,” Adams says, explaining that for her, religion in general has always been a source of fascination and a lot of questions. “I think the artist in me always wants to say ‘wait a second. What? Why? Why are we doing all of this?’” Adams has been a performer all her life, and the rituals and theatricality inherent to Catholicism has always been intriguing to the actress-turned-filmmaker; in fact, Adams’ own marriage inspired the story of Simchas and Sorrows.

“I used to always joke that I inherited all of the anxiety of being Jewish but none of the joy and spirituality that surrounds it. In this movie, it was fun for me, because I learned a lot more about the more orthodox traditions.”

“When I first met my husband, he wasn’t talking about being Jewish at all,” Adams says. As the two began dating and became engaged, Adams realized that, both as a religion and an ethnicity, Judaism was important to her new partner’s identity. “I learned a lot from him and his experience about just how delicate and complicated it is being Jewish today,” Adams says.

Adams’ film acting career has afforded her the opportunity to work with some of the great icons of the silver screen, appearing in films directed by Scott Frank, Jodie Foster, Pascale Ferran and Ang Lee, to name just a few. This provided plenty of inspiration for Adams to direct her own feature film. One important element that Adams knew she needed was the right cast, and the group of actors that she assembled is an impressive one. Chip Zien, who plays the role of Agnes’ prospective father in-law, is a veteran of the Broadway stage whose credits include playing the Baker in the ordinal 1986 production of Stephen Sondhiem’s Into The Woods.

“I loved the scenes that I got to play, and [that I got] to deal with some of the issues that I’ve dealt with in my own life,” Zien says. Best known to audiences as the voice of Howard The Duck, Zien grew up in Milwaukee and describes himself as a “midwest Jew.” “When I first came to New York and saw people wearing long coats and hats, I thought they were Mormons or something,” Zien says. “I used to always joke that I inherited all of the anxiety of being Jewish but none of the joy and spirituality that surrounds it. In this movie, it was fun for me, because I learned a lot more about the more orthodox traditions.”

When it comes to working with Adams, Zien goes straight into Broadway mode as he sings his director’s praises. “Gen [Adams] is just terrific,” Zien says. “You know, you always take a leap of faith when you sign onto a project, but literally from the get-go, spending time with Gen was like just joining a very recognizable family.”

“I think the artist in me always wants to say ‘wait a second. What? Why? Why are we doing all of this?’”

John Cullum plays Agnes’ grandfather, Nate, who raised her as if she was his own daughter. “We got along very well,” Cullum says of his time working with Adams. Cullum is always looking for good writing, and he found it in Simchas and Sorrows, where he played all of his scenes opposite Adams. On stage, the 92-year-old two-time Tony winner has done everything from playing Laertes in Hamlet with Richard Burton to starring in Man of La Mancha and Shenandoah, and she is well known for the hit television series Northern Exposure. Still, Cullum had no trouble deferring to his younger co-star and director when it came time to shoot, trusting in her instincts. “Whatever she suggested, if it was contrary to my idea, I rethought it and went along with her idea,” Cullum says with a chuckle.

As Adams prepares to deliver her artistic baby, Simchas and Sorrows, to audiences through Cinejoy on Apr. 7, she has a literal baby due on Apr. 22. While Adams finds herself spending most of her time promoting one baby and preparing for the arrival of the other, the artistic gears in her brain are still at work developing new projects. If Simchas and Sorrows finds the audiences that it so richly deserves through Cinequest, there is little doubt that we’ll be hearing a lot more of the name Genevieve Adams in the future.

Read more interviews with filmmakers:
The Unsinkable Teemu Nikki and Jani Pösö
Oscar Nominee Martin Strange-Hansen Has A Lot On His Mind