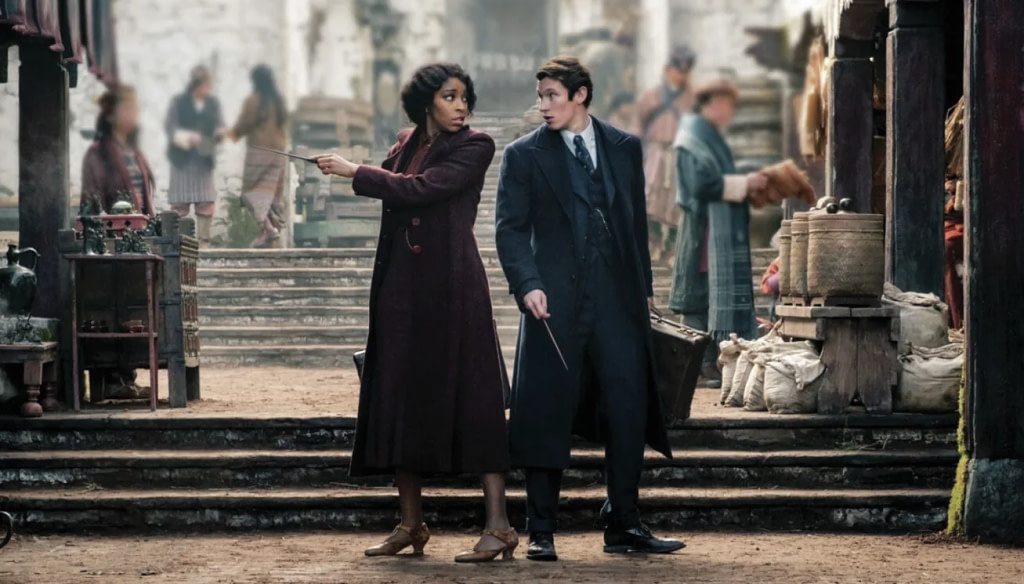 The Secrets of Dumbledore acted as a port key back to my happy place, enough so that I was able to forgive the shortcomings to a point that I will see it again. Photo Courtesy of Heyday Films.

As an obsessive Harry Potter fan, the wizarding world has been a personal escape for over 20 years; that is, until a dementor—in the form of its creator, JK Rowling—sucked the joy out of it for me. Fantastic Beasts: The Secrets of Dumbledore represents the first time I’ve ever entered into this magical realm unsure if I even wanted to be there.

In Fantastic Beasts: The Secrets of Dumbledore, turmoil has engulfed the wizarding world, due to the actions of Gellert Grindelwald (Mads Mikkelsen, Casino Royale, Another Round). Professor Albus Dumbledore (Jude Law) knows that Grindelwald, the dearest companion of his youth, is making a move for world domination by starting a war against the non-magical world. The professor is unable to face Grindelwald on his own because of a binding blood oath spell they made as teenagers, so he recruits a team of misfits, led by Magizoologist Newt Scamander (Eddie Redmayne). Newt leads an intrepid team of wizards and witches—and one Muggle, baker Jacob Kowalski (Dan Fogler)—on a dangerous mission, where they encounter old and new beasts and clash with Grindelwald’s ever-increasing legion of followers.

Fantastic Beasts: The Secrets of Dumbledore comes with more baggage than you can fit on a pushcart at platform 9 3/4. Not only is there the Rowling issue, there’s the recasting of the role of Grindelwald, played by Johnny Depp in the first two films, and the fact that the previous entry in the series, The Crimes of Grindelwald, was met with mixed reactions at best. As far as the second subject is concerned, director David Yates makes no effort to explain the change in actors, successfully playing him as the same character and trusting the audience to accept it. As for course correction after the second film, The Secrets of Dumbledore has attempted to slow down the action and make the story a bit less unwieldy. Secrets of Dumbledore is considerably less overstuffed and frenetic, but it’s still hard to follow for anyone who isn’t a die-hard fan, and at times the film overcompensates by moving a bit too slowly.

Law and Mikkelsen are terrific, with Mikkelson bringing a fierce intelligence and menacing presence that “He Who Should Never Have Been Cast” wasn’t able to capture, and Mikkelsen proves in his first scene that the role should have been his from the beginning. The specific nature of Dumbledore’s feelings for Grindelwald as a teenager is finally spelled out in a way that leaves no room for interpretation, and I could not have been happier about it. As for Newt, Redmayne is as lovable—and as frustratingly mumbly—as ever, but Newt never feels like the lead character of The Secrets of Dumbledore, and not entirely because it’s the professor’s film, either.

Despite bringing in a ringer in the form of Co-writer Steve Kloves—who scripted the Harry Potter films—Rowling is still unable to bring her brand of intricately crafted yet fluid storytelling to Fantastic Beasts, and the “we’re making it up as we go” feeling of Crimes of Grindelwald is still present. Even if the action of Secrets of Dumbledore is less about moving the story forward than it is about trying to bring things closer to where they were at the end of the first film, Warner and Heyday Films seem to know that, even though they want to make two more of these, the steep dropoff at the box-office, the Rowling backlash and the pandemic effect make it anyone’s guess if there’s even an audience for these films anymore. While Secrets of Dumbledore wraps up absolutely nothing, it does go to great pains to leave audiences, as well as the principal characters, including Ezra Miller‘s Credence, on a more stable footing, just in case. In fact, the movie plays like the season finale of a television series that may or may not be renewed.

All that being said, for me, my lowered expectations and even my tempered level of enthusiasm actually helped me to enjoy this Harry Potter entry. The Secrets of Dumbledore acted as a port key back to my happy place, at least enough so that I was able to forgive the shortcomings to a point that I will see it again. Fantastic Beasts remains a property that is for hardcore, wand-carrying fans and is not going to work for the average, Muggle moviegoer.  –Patrick Gibbs