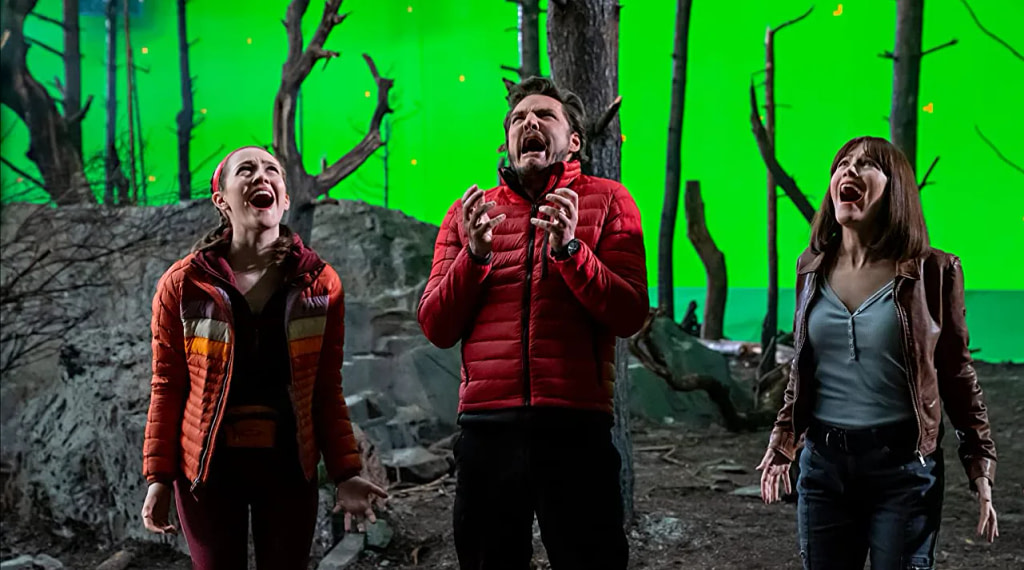 Judd Apatow's tendency to believe that too much is never enough is frustrating to say the least, giving The Bubble a feeling of half-baked indulgence. Photo Courtesy of Apatow Productions.

We are now officially in the phase of making comedy movies set during the height of the COVID-19 pandemic. The Bubble, the new comedy from Judd Apatow (The 40-Year-Old Virgin, Knocked Up), holds a dubious distinction as the, “Oh yes, we went there,” movie.

The Bubble, which is obviously inspired by the making of Jurassic World: Dominion, centers around Carol Cobb (Karen Gillan, Gunpowder Milkshake, Dual), an actress whose last film, Jerusalem Rising (a drama in which she starred as a half-Israel, half-Palestinian woman despite being a red-haired American), was a potential career-ending critical and box office disaster. Despite misgivings, Carol is talked into returning to her hit franchise, Cliff Beasts, in order to salvage her career. The catch is that, because of the pandemic, Cliff Beasts 6 is shooting in England under extreme lockdown precautions at an isolated hotel. The studio is going to extremes to make sure that the $100 million production doesn’t shut down and serves as an inspiration to and a beacon of hope for the wider movie industry. Everything is in place to make certain this is a smooth production and everything is taken care of—what could go wrong?

Of course, if things didn’t go wrong, there would be no movie. The Bubble is a Hollywood industry parody that’s part Noises Off “the show must go on”-style comedy and part Tropic Thunder-style satire of Hollywood excess and studio micromanaging, as well as the absurdity of celebrities (who already live in a different world from normal people) being kept isolated in one place together under difficult circumstances. Apatow’s “throw everything at the wall and see what sticks” style of “I can’t believe they just did that” comedy is hit or miss for me. There is some very funny stuff in The Bubble. There’s also a lot of gross-out humor and an abundance of the kind of joke that’s funny if you are a Hollywood insider or an entertainment news junkie, but these likely don’t play to the average moviegoer.

Gillan is great, holding the movie together in the role of the most grounded and sane of this kooky collection of Hollywood eccentrics. The rest of the Cliff Beasts 6 cast includes Keegan-Michael Key, David Duchovny, Leslie Mann, Iris Apatow and Pedro Pascal. Pascal (The Mandalorian) is terrific as Dieter Bravo, an in-film actor who is new to the Cliff Beasts series and faking an outrageous and unidentifiable pseudo-Latin accent. The sequences of shooting the film in front of green screen, which we get to see from the point of view of how the finished film would look, are hilarious, and Pascal steals many of those scenes. That said, not all of his material works, especially a recurring joke involving a computer exercise program played by another, very prominent Star Wars actor just falls flat. Key adds a lot to anything that he’s in, and Duchovny has some funny moments.  Leslie Mann—Apatow’s real-life spouse—shines in the movie-within-the-movie segments playing a bad actress, but she is just okay in the rest of the film. Iris Apatow, Judd and Leslie’s daughter, makes quite an impression as Krystal Kris, a TikTok star who is cast in Cliff Beasts 6. Maria Bakalova, however, who made such an impression in Borat Subsequent Moviefilm is sadly underused to the point of being nearly wasted, and Kate McKinnon continues her perfect streak of being the best part of Saturday Night Live but never being in a truly good film or given a good role.

However, the strong cast is undermined by there simply being too many, with cameos popping up left and right. The Bubble is crammed so full of stars and half-developed comedic bits that it’s in danger of bursting at any moment. There’s also the underlying question running throughout the movie of why we’re watching a wacky comedy about pampered, spoiled stars cracking under pressure put on them from megalomaniacal Hollywood executives, all set during against the backdrop of a global pandemic that has cost 6.14 million lives up to this point.

The Bubble has some big laughs and enough strengths to be worth watching as a Netflix movie, especially when you can start and stop, but at just over two hours, I’m glad that I didn’t see it in a theater. It may be that The Bubble fairs a bit better with more enthusiastic Apatow fans than myself, but I suspect that the reception to this half-baked indulgence will not be one of unbridled enthusiasm for the majority who see it. The Bubble plays more like a padded out and expensive SNL sketch than satisfying movie. The writer-director’s tendency to believe that too much is never enough is frustrating to say the least. –Patrick Gibbs