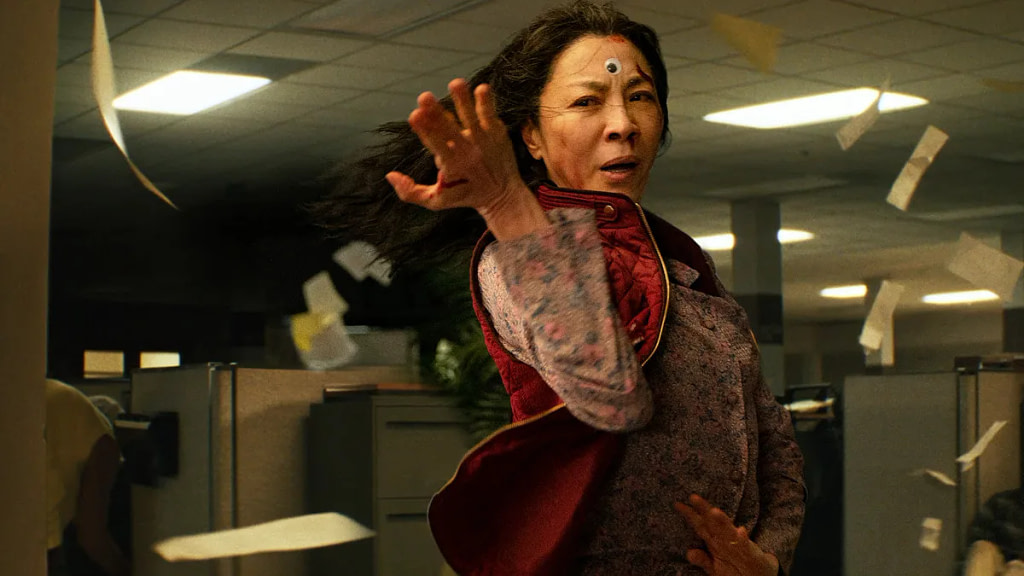 Everything Everywhere All At Once is rewarding for those interested in a ride through multiple universes and a tender exploration of the fragile human psyche. Photo Courtesy of AGNO and Ley Line Entertainment

Film Review: Everything Everywhere All At Once

Everything Everywhere All at Once
Directors: Dan Kwan, Daniel Scheinert

As a critic, there are occasionally movies that I love that I’m also very much aware are going to leave some people saying, “That was so weird. Why did you recommend that?” Everything Everywhere All At Once is a perfect example.

The great Michelle Yeoh stars in Everything Everywhere All At Once as Evelyn Wang, a Chinese-American immigrant who runs a struggling laundromat with her husband, Waymond (Ke Huy Quan, The Goonies, Indiana Jones and the Temple of Doom). The IRS is auditing the family on the same day that they are preparing to host a community celebration of the Chinese New Year. As if this wasn’t enough stress, Evelyn is also dealing with the arrival of her overbearing and judgemental father (James Hong) just as Evelyn’s daughter Joy (Stephanie Hsu, Shang Chi and the Ten Rings) is getting ready to move in with her new girlfriend.

Things get decidedly more complicated at the IRS office when Waymond’s body is briefly taken over by Alpha Waymond, a version of Waymond that exists in a parallel universe, and he explains to Evelyn that infinite parallel realities exist, each diverging at the point where a life-changing decision is made. The people of the Alpha Universe developed technology that allows people to access their parallel universe counterpart’s skills, memories and body, but their reality is being threatened by a supervillain called Jobu Tupaki, who has created a black hole that is capable of destroying all the various universes. Alpha Waymond believes that this incarnation of Evelyn is the only person who can stop it.

Everything Everywhere All At Once can perhaps best be described as Crouching Matrix, Hidden Malkovich. The writing and directing team of Dan Kawn and Daniel Scheinert (Swiss Army Man), who go by the professional name “Daniels,” has created a gonzo, existential comedy that combines the sensibilities of The Wachowskis and Charlie Kaufman, and it’s an amazing moviegoing experience. The mix of surrealism and goofy, non-stop and expertly staged action requires laser focus from its audience, and Daniels’ tendency to move from profoundly intelligent commentary to occasionally juvenile humor is a mix that simply isn’t going to work for everybody.

Yeoh gives one of the defining performances of her distinguished career in the best leading role she’s received in over 20 years. Yeoh uses plenty of her trademark physicality but portrays a breadth of emotion and human complexity that shows she doesn’t need to raise a finger in order to be counted among the greatest presences of the silver screen. It’s so delightful to see Quan, now 50, in a supporting lead in an action-adventure again, and he gives a wonderfully nuanced and hilarious portrayal of multiple versions of the same man, flexing his action muscles better than ever before. He’s so good in the role that it left me really wishing that he was appearing in James Mangold’s Indiana Jones film next year, though it must be said that Everything Everywhere All At Once allows him to play true to his ethnic and cultural background without resorting to the kind of degrading stereotypes that make me feel so mortified whenever I rewatch Temple of Doom. Hsu may well top both of them with her star-making performance as Joy, a teenager with a lot of angst and anger who feels misunderstood and rejected by the world. Hsu and Yeoh should both be considered early Oscar contenders, as should Jamie Lee Curtis in a brilliant comedic turn as Deirdre, the IRS inspector conducting the audit.

Everything Everywhere All At Once is one of the best experiences I’ve had in a darkened theater in quite some time. It tells a story that is joyous, profound, insightful, sensitive and outrageously entertaining. More than once, I’ve heard Steven Spielberg’s Hook described as a movie that every boy should see with his father, and I would add that Everything Everywhere All At Once is a movie that every teen girl should see with her mother. However, it is not for the squeamish, primarily due to a surprisingly drawn-out bit involving what I’ll simplify by describing as a butt plug—but it’s incredibly rewarding for those who are able to put inhibitions aside and strap in for a ride through multiple universes and a tender exploration of the fragile human psyche. –Patrick Gibbs