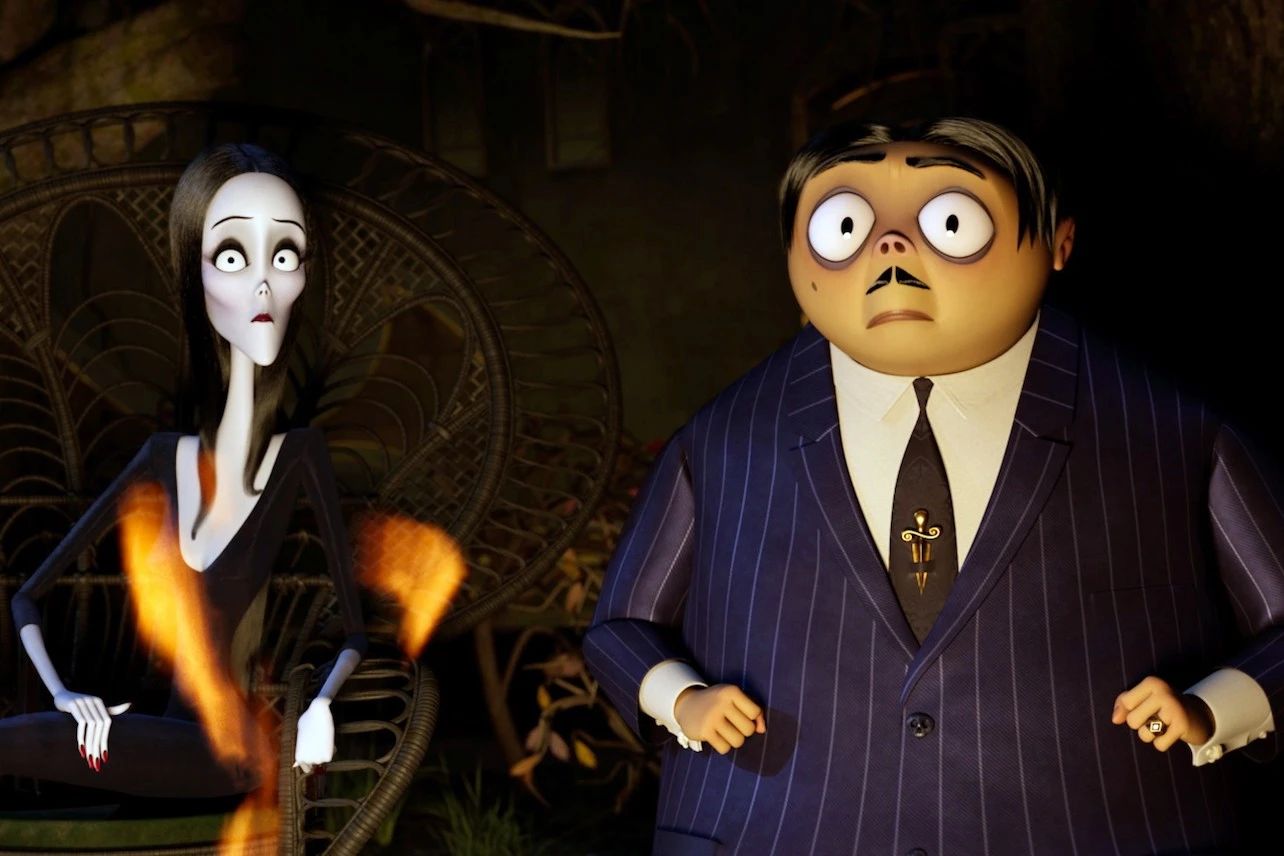 Cinesite Studios
In Theaters and Streaming on Video Demand 10.01

I make a point of revisiting the live ’90s action treatment of The Addams Family and it’s sequel, Addams Family Values, every October. They have both aged well. While I’m not the kind of critic who believes that every unnecessary remake is something to have a conniption about, I found the 2019 animated version to be lifeless, and not in the way that the famous family would celebrate. The Addams Family 2 is a step up, but only a moderately sized step.

In The Addams Family 2, we find Morticia and Gomez, once again voiced by Oscar winner Charlize Theron and Oscar Isaac (the Star Wars sequels, The Card Counter) distraught that their children are growing up, skipping family dinners and totally consumed with “scream time.” To reclaim their bond, they decide to cram Wednesday, Pugsley, Uncle Fester and the crew into their haunted camper and hit the road for one last miserable family vacation.

Their adventure across America takes them out of their element and into hilarious run-ins with their iconic cousin, Itt, as well as many new kooky characters. But when an experiment that Wednesday (Chloë Grace Moretz, Shadow in the Cloud) performs leads mad scientist Cyrus Strange (Bill Hader, It: Chapter 2) to take an interest in her, the family outing may be headed for a major detour.

Directors Greg Teirnan and Conrad Vernon go with the flow this time around. They stick to a more Addams-esque feel and the story itself isn’t half bad. Isaac is given more humorous moments, and Theron feels a bit less like she’s phoning in the performance: She’s got the character down this time, and the same can be said of Moretz.

The sad fact is that The Addams Family 2 is far superior to Venom: Let There Be Carnage, the other big sequel of the weekend, but that’s another bit of very faint praise. It’s hard to say whether there will be more entries in this series, especially with Tim Burton’s Wednesday headed for Netflix in 2022. If there are, I won’t be dreading the thought of it, but I’ll hardly be filled with gleeful anticipation, either.

This version of The Addams Family is the very definition of doing little more than existing merely for existence’s sake and to make a quick buck off of parents desperate need for something to keep their kids busy. Still, it’s an improvement. There are a few actual laughs, and Isaac’s Gomez counts for a lot. The Addams Family 2 snaps along with a certain degree of rhythm and has just enough of a sense of morbid fun to be surprisingly watchable. –Patrick Gibbs