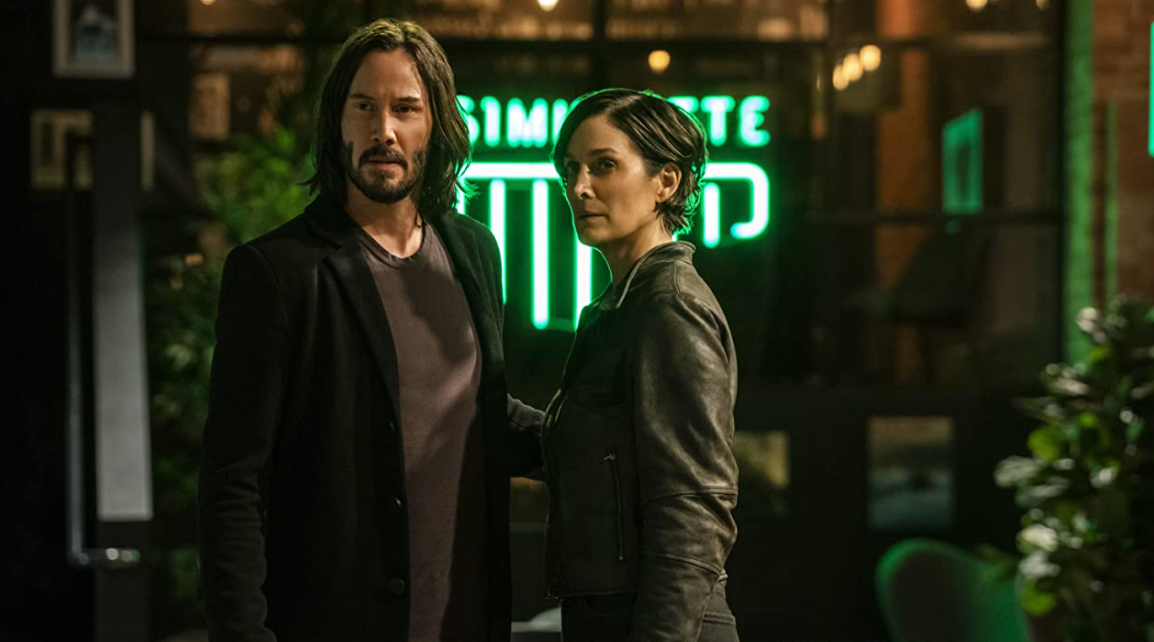 In 1999, The Matrix completely blew my mind. I felt like it had changed me in some way. The Matrix was a defining movie for my generation and the generation after it. Then, the lackluster sequels were also defining films, but for the wrong reasons, almost becoming synonyms for the word “disappointment.” As such, The Matrix Resurrections didn’t have to blow my mind as long as it didn’t just blow.

The Matrix Resurrections finds Thomas Anderson (Keanu Reeves) 20 years older and substantially less dead than he was the last time we saw him, now living a pretty ordinary life in San Francisco working as a game designer. He sees an analyst (Neil Patrick Harris, How I Met Your Mother) because he occasionally has bizarre episodes of seeing things and a feeling of deja vu, though the blue pills that the analyst prescribes keep those under control.  But Anderson keeps seeing a woman (Carrie-Anne Moss) at his favorite coffee shop, Simulatte, who awakens feelings and memories in him. But when a mysterious, yet familiar figure (Yahya Abdul-Mateen II, Candyman, Aquaman) shows up offering to open up his mind to a different world, to put it succinctly… Whoa.

Lana Wachowski, one half of the sibling duo behind the original trilogy, has stated that she conceived of the concept for The Matrix Resurrections after her parents passed away. While she couldn’t bring them back,  Lana could bring back the next most-important people she missed: Neo and Trinity. What that has to say about the realities we can create as coping mechanisms to help us deal with actual reality is far more poignant and interesting than any of new ideas that The Matrix Resurrections tries to throw into its universe. I don’t say that with derision but with the sympathetic understanding that comes with having lost my own parents.

As comforting nostalgia, The Matrix Resurrections worked well enough for me that I’m going to see it again, probably more than once. As a piece of storytelling and world building, it’s a combination of replaying used concepts and attempted tweaks that miss at least as often as they hit. There’s a meta, self-parody quality to the movie that is so pervasive that it brought to mind Free Guy and even Gremlins 2: The New Batch (the latter comparison is probably making anyone who reads this groan or cry, but it works). There are elements of the story that strain credibility and some that just plain don’t make sense, but if that isn’t as familiar to die-hard fans of this franchise as black leather, they were using chemical aids to enhance the experience.

The action, design and performances are fine, but nothing particularly stands out. There’s action, but no really memorable set pieces, and they all have more than a “been there, done that” quality to them. Still, it’s nice to see Reeves and Moss together on screen again, fighting the good fight and raging against the machines. The two are clearly having fun, almost as much as the younger cast members who are getting paid to play Matrix in the backyard of their minds with these living living legends.

The bottom line is this: If you’re going into The Matrix Resurrections expecting an experience that matches the original, breaking new ground and redefining a genre, prepare to be brutally crushed like an ant. But let’s be honest, that couldn’t be done with a 20-something year-old franchise, and it’s far too much to expect here.

What we get instead is a Force Awakens– or Jurassic World–style, big-budget fan film—with Lana Wachowski as her own biggest fan—that brings back some fond memories and invites audiences to relax and escape into a goofy diversion for two-and-a-half hours. It may have a vague “Matrix Holiday Special” quality to it, but it’s just entertaining enough with a lot less pretense than the previous sequels, if a lot less ambition as well. The Matrix Resurrections is an odd mix that will divide audiences and critics alike. But for fans like me who are still trying to convince themselves that the other sequels worked, it’s still worth following the rabbit. –Patrick Gibbs