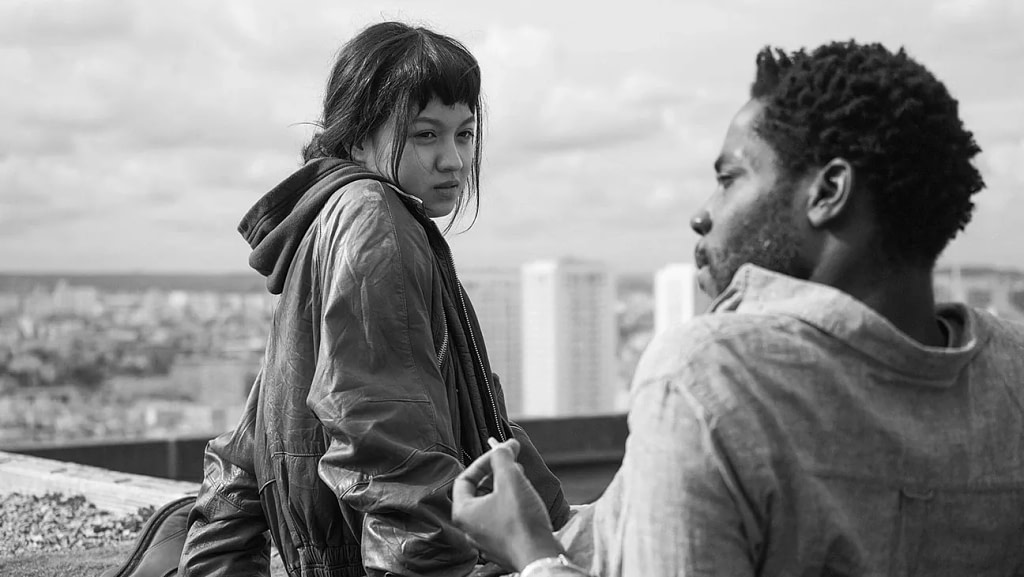 Paris, 13th District borders on trifling, which is disappointing given this comes from misguided choices rather than a lack of substantive ideas. Photo Courtesy of Page 114.

If you want to go to the movies this weekend and are looking for an alternative to the “Wizarding World,” you might want to consider a trip to Paris. Specifically, the 13th District, known as Les Olympiades.

In Les Olympiades, or Paris, 13th District, we meet a trio of French millennials: there’s Camille (Makita Samba), a young teacher who is studying for his doctorate and who answers an ad for a roommate posted by Émilie (Lucie Zhang). Émilie was looking for a female roommate but doesn’t take much persuading to give Camille a chance, and their relationship quickly turns sexual. The two aren’t quite on the same page as to the nature of the relationship, however, leading to friction. Enter Nora (Noémie Merlant), who is going back to school to study law when a chance decision to wear a stylish wig to a club leads to her being mistaken for a popular cam-girl called Amber Sweet (Jehnny Beth), and Nora gets laughed at and harassed off campus. She then takes a job working with none other than our old friend, Camille.

Director Jacques Audiard (The Beat My Heart Skipped, A Prophet) has adapted this episodic story from the works of American cartoonist Adrian Tomine with mixed results. Paris, 13th District is beautifully photographed in atmospheric black and white, and it has an undeniably captivating quality. However, the disjointed nature of the narrative means it never quite gels together. While the black and white photography does elevate the frequent nudity into at least looking like fine art, there are only so many explicit sex scenes you can put in one film before it starts make everything else feel like it’s just trying to kill time between them.

The most unfortunate aspect of this is that some very interesting ideas are introduced that are never explored in any depth, in particular a story thread about Émilie’s inability to cope with visiting her dying grandmother. The plotline about Nora’s growing obsession with the cam-girl, Amber Sweet, is the most contrived but arguably the most interesting—as she makes contact, the two begin to build an unexpected connection.

The performances are strong and natural, but none of them leave a lasting impression, mostly because Audiard spends too much time focusing on showing them literally naked, while largely only teasing at laying them bare beyond their carefully crafted personas. That statement feels a bit harsh even to me, but I was frustrated by the feeling that Paris, 13th District tends to further the false narrative of millennials as a shallow and self-involved generation. There’s certainly a big place for sex in a story of self discovery and finding one’s identity, but there are so many other elements in the mix, and Audiard has the, ready to go, but inevitably jumps back to the bedroom whenever one of those stories is starting to make any headway. I’m not a big fan of remaking international films for Hollywood, but there are a number of threads here that I wanted to see explored more seriously, to the point that I found myself distracted, scratching down mental notes about where I would take them in their own separate screenplays.

Paris, 13th District is a visually splendid little film that’s not without its charms, but in the end, much like the relationships it portrays, there’s little in the way of lasting impact. Audiard captures the free-spirited frivolity of youth without taking enough interest in it as a time of learning and development. The film ends up feeling slight to the point of bordering on trifling. That’s particularly disappointing when it comes from misguided choices rather than a lack of potential for substantive ideas or themes –Patrick Gibbs