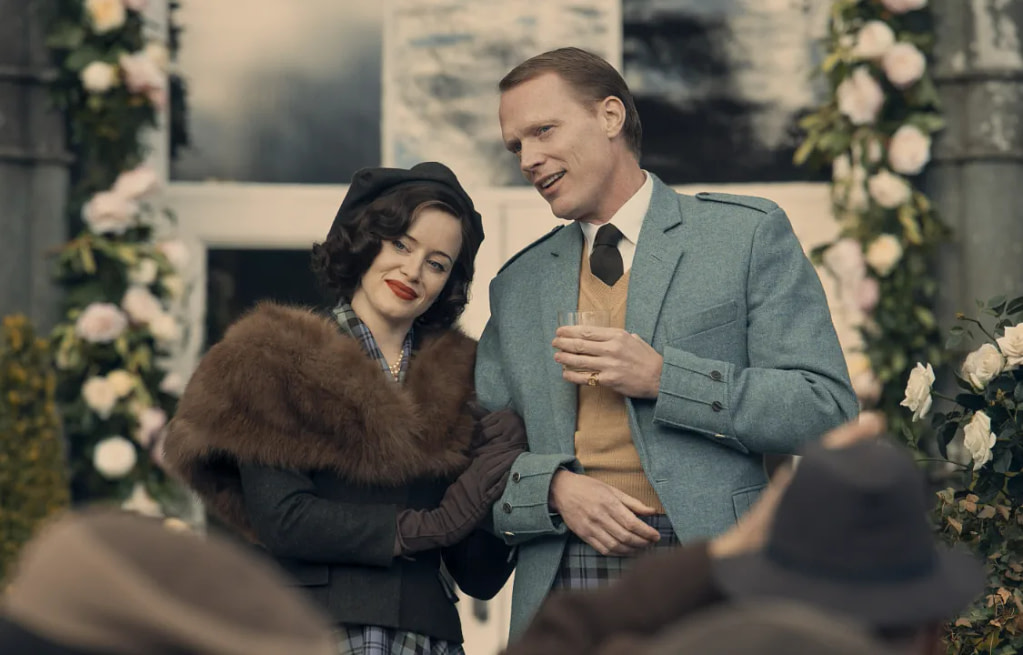 A Very British Scandal is sordid without being trashy, but it’s very definitely aimed at those who enjoy watching painful drama unfold. Photo Courtesy of Blueprint Pictures .

A Very British Scandal
Created for Television by Sara Phelps

There’s something about scandalous behavior among the upper-class elite that we find particularly juicy, a fact not lost on the production company behind the 2018 miniseries A Very English Scandal. It’s so clear to them, in fact, that they’ve followed it up with the semi-spinoff A Very British Scandal, which makes you really wonder where they have left to go from here. A U.K. Scandal? A Very London Scandal? Tea and Strumpets?

The three parts of A Very British Scandal dramatize the tumultuous marriage—and bitter, public divorce—of Margaret Campbell (Claire Foy, The Crown, First Man) and Ian Campbel, the 11th Duke of Argyll (Paul Bettany, A Beautiful Mind, WandaVision). The first episode covers divorcee Margaret being swept off her feet by aspiring divorcee Ian, who is only too eager to ditch his current spouse, Louise “Oui Oui” Campbell (Sophia Myles, Underworld, Transformers: Age of Extinction), and his adulterous affair with Margaret is just the provocation he’s looking for to make Oui Oui end the marriage. Margaret soon becomes the new Duchess of Argyll, and her wealthy father, George Whigham (Richard McCabe, Peaky Blinders) becomes Ian’s creditor, loaning him a sizable sum of money to fund an expedition to raise a sunken ship supposedly full of treasure. But as Ian’s addictions and mood swings begin to become apparent, the marriage becomes a rollercoaster of mad attraction one moment and a thrusting of emotional and verbal daggers into each other the next. As things reach a tipping point, the 1963 case of Argyll vs. Argyll becomes one of the most notorious tabloid cases in British history.

Director Anne Sewitsky (Black Mirror) does a remarkable job of keeping the audience engaged in A Very British Scandal, considering that neither of these two are very likable people. Sewitsky has a lot to work with in the terrific screenplay by Sara Phelps (The Casual Vacancy) and in the two lead performances. Bettany is terrific playing his first truly dastardly character in some time, but it’s Foy’s show all the way. The depth of the performance is incredible, bringing out layer upon layer as the story progresses, and whether we ever fully learn to like Maragert or not, we go from being intrigued to disgusted to genuinely caring about her.

The crux of the story is really in the double standards in the treatment of women versus men, particularly when it comes to societal judgements on sexual behavior. The shaming and abuse that Margaret endures throughout her life—whether it’s about her sex life, being caught up between the tense relationship between her parents or simply being ridiculed for her stammer—is quite disturbing, particularly when contrasted with everything that Ian gets away with. Margaret is far from lionized in A Very British Scandal, but the series has a lot of say about systemic misogyny and how ingrained it is in our society to pit women against each other in games of survival and then to vilify them for it. Meanwhile the men involved walk away hardly the worse for wear.

A Very British Scandal is sordid without being trashy, but it’s very definitely aimed at those who enjoy watching painful drama unfold. Despite the great performances and strong execution, it’s not my cup of tea, per se, and yet there’s no question that, after a certain point, I was hooked. The true-life soap opera offers just enough legitimate social commentary to make one not feel guilty for indulging, and the decidedly bitter aftertaste is part of the point. –Patrick Gibbs