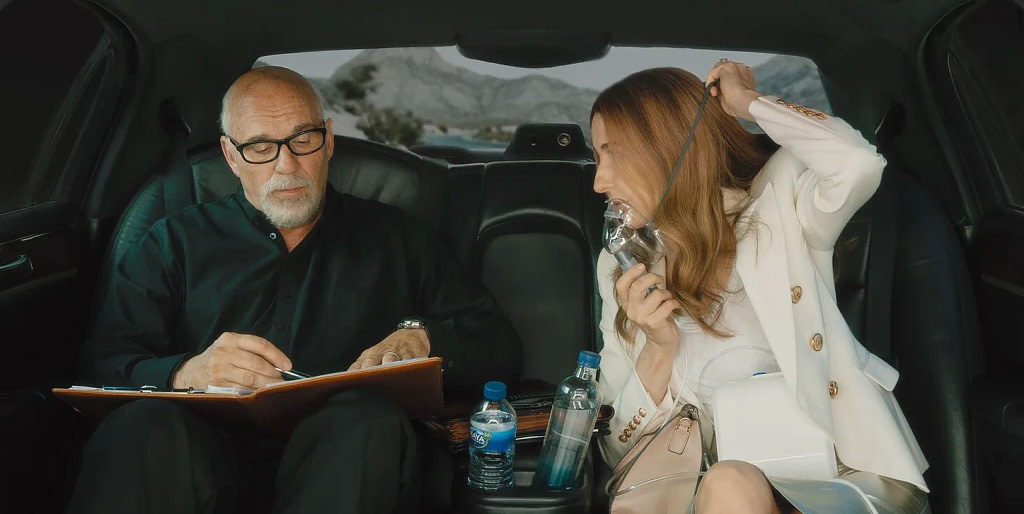 Aline hits one false note after another, and as much as I'm loath to stoop to such a cheap reference, yes, my hate will go on and on. Photo Courtesy of Rectangle Productions.

I have to admit that I haven’t actually liked a biopic about a popular musician since Walk The Line. The genre rarely rises above self-important melodramas designed to win acting Oscars and sell albums, and I don’t much care for it.  But I also don’t think I’ve ever genuinely hated one until I saw Aline.

While it’s billed as “a fiction freely inspired by the life of Céline Dion,” Aline is, in substance,  nothing more than a formulaic biopic with the names changed for legal reasons. The film chronicles the life and career of “Aline Dieu” (Dieu being French for God), a Quebecois girl graced with a powerhouse singing voice. Aline follows the girl’s humble beginnings—singing at small events with her family—to her meteoric rise to superstardom. At age 12 she’s discovered by Guy-Claude Kamar (Sylvain Marcel), a very thinly disguised version of René Angélil, the real-life, middle-aged music producer/manager with whom Aline/Celine would become romantically and sexually involved only eight years later and marry in 1995. That should the creepiest and most unnerving aspect of Aline, but amazingly, it comes in a distant second.

The role of Aline is played by Director and Co-Writer Valérie Lemercier, and by no one else, from ages five to fifty-something. Despite being nearly 56 years old when the movie was shot, through the magic of digital de-aging techniques, Lemercier is utterly convincing as being 45 throughout. In Aline’s early years, Lord of the Rings style techniques are used to make her smaller, whether it’s shooting her from creative angles or using effects to make her smaller than everyone else. To say that this idea doesn’t quite work feels like an insult to truly promising concepts that somehow went wrong, such as cheese spread with artificial bacon flavoring, or Christianity.

The bizarrely unmotivated gimmick is such a colossal misfire that, at worst, renders Aline completely unwatchable, and, at best, turns it into a grisly car wreck that you can’t look away from for fear that you might miss something particularly gruesome. Lemercier’s most convincing moments come when she’s lip syncing to the voice of Victoria Sio, who does a stunning job of capturing Dion’s distinctive vocals, and I completely bought the movie in those moments—as long as I had my eyes closed.

While I sincerely do not wish to be cruel toward Lemercier, who is giving it her all, the only level on which the casting success is in helping Lemercier, the director, play the relationship between Aline and Guy-Claude as almost okay, because despite the dialogue to the contrary, they appear to be the same age. Yes, Lemercier captures the girlish gait of a younger woman, and on stage as a one-woman-show, she might have something. But it doesn’t play here. The distressing mix of experimental self-indulgence with a script that doesn’t manage to be as eventful, insightful or stimulating as the made-for-television movies about The Partridge Family or The Monkees from the ’90s, combines for the single worst moviegoing experience I’ve had so far in 2022. On the bright side, you get to hear various versions of Nature Boy roughly 38 times.

Whether Lemercier is going for some sort of play on the grown-up polish and majesty of Dion’s voice in one who is so young or is purely misusing cutting-edge techniques to cast herself in a role she can’t play, it doesn’t work, and despite the “unauthorized” feel, Aline is the blandest and most embarrassingly reverential film of its type I’ve ever seen. At just over two hours, it’s shockingly long for a film in which nothing of interest ever happens. It may seem like I’ve spent too much of this review focusing on the central performance, but there’s simply nothing else about the production that’s worthy of even mentioning. The act of reading the subtitles was the only aspect that gave my brain anything to do and prevented me from looking away.

Aline hits one false note after another, and I hated it in a way that’s usually reserved solely for the works of M. Night Shyamalan or John Wayne Gacy. As much as I’m loath to stoop to such a cheap reference, yes, my hate will go on and on. –Patrick Gibbs