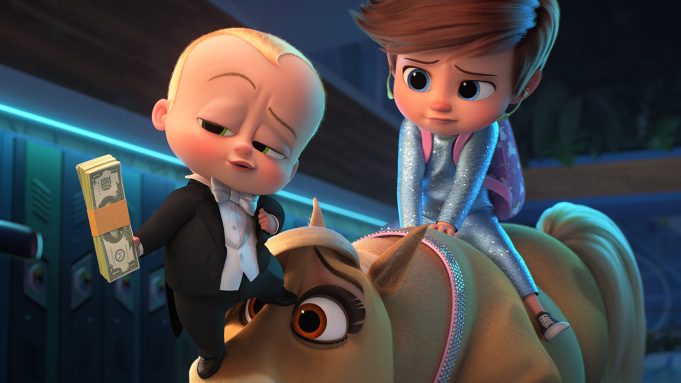 DreamWorks Animation
In Theaters and Streaming on Peacock 07.02

I’m a huge animation buff, and it doesn’t take much to get me to watch such films. But I skipped The Boss Baby when it came out in 2017 because the advertising campaign made it look like a one-joke concept, and it’s a decision I’ve regretted because the film itself was clever and touching. I’ve been skeptical as to whether or not The Boss Baby: Family Business was really necessary, but I wasn’t about to judge a book by its cover again.

In The Boss Baby: Family Business, the Templeton brothers—Tim (voiced by James Marsden, X-Men) and his little brother, Ted (Alec Baldwin)—have become adults and drifted away from each other. Tim is now a married, stay-at-home dad with two daughters, Tabitha (Arianna Greenblatt, In the Heights) and Tina, while Ted is a very successful hedge fund CEO. The brothers haven’t seen each other, and have barely even spoken in years.

Tim is surprised when Ted shows up on his doorstep, wondering what is behind it. It turns out that the answer to that question is Tina (Amy Sedaris, Strangers with Candy, The Mandalorian), who is, in fact, an employee at Baby Corp. She has a mission that not only requires her to enlist the help of her father and uncle but to use the magic formula that keeps the boss babies young forever—the one that Ted gave up in the first film in order to grow up as Tim’s brother—to physically transform them back to their childhood selves.

The Boss Baby: Family Business may not have been necessary, but it’s a good sequel with a lot of creative ideas, plenty of laughs and, most importantly, is able to recapture the tenderness of the original. Screenwriter Michael McCullers (the Austin Powers sequels) and director Tom McGrath (Megamind), the creative behind the first Boss Baby, are back, which makes all the difference in keeping the tone and details firmly intact.

Baldwin is perfect, reprising what is arguably his best big screen role in years. Marsden—who replaces Tobey Maguire, who voiced grown-up Tim the first time around—brings plenty of energy and even some depth to the role, and he even gets a chance to show off his superb singing voice in a duet with Greenblatt. Jeff Goldblum (Jurassic Park, Thor: Ragnarok) is a lot of fun as the villain of the piece, and the squeaky-voiced Sedaris was born to be a baby.

The weakest elements of the film are where it feels a bit too reminiscent of Toy Story 3, which is a movie you never want to invite comparisons to, because there is no measuring up to it, and this one also leaves more loose ends than the first one. But the plot involving Tim’s fears that Tabitha is outgrowing her need for him is done well, and it’s handled in a way that should appeal to both adults and children alike. The Tim and Ted dynamic is still at the heart of The Boss Baby: Family Business, and fortunately, it’s one that doesn’t wear out its welcome easily, because it’s such a strong portrayal of both sibling rivalry and the bond between brothers.

The Boss Baby: Family Business isn’t in the same league as The Mitchells vs. The Machines or Luca, but it’s an enjoyable family movie that comes dressed for success. It may still be on the same formula, but you know what they say: If it ain’t stinky, don’t change it. –Patrick Gibbs