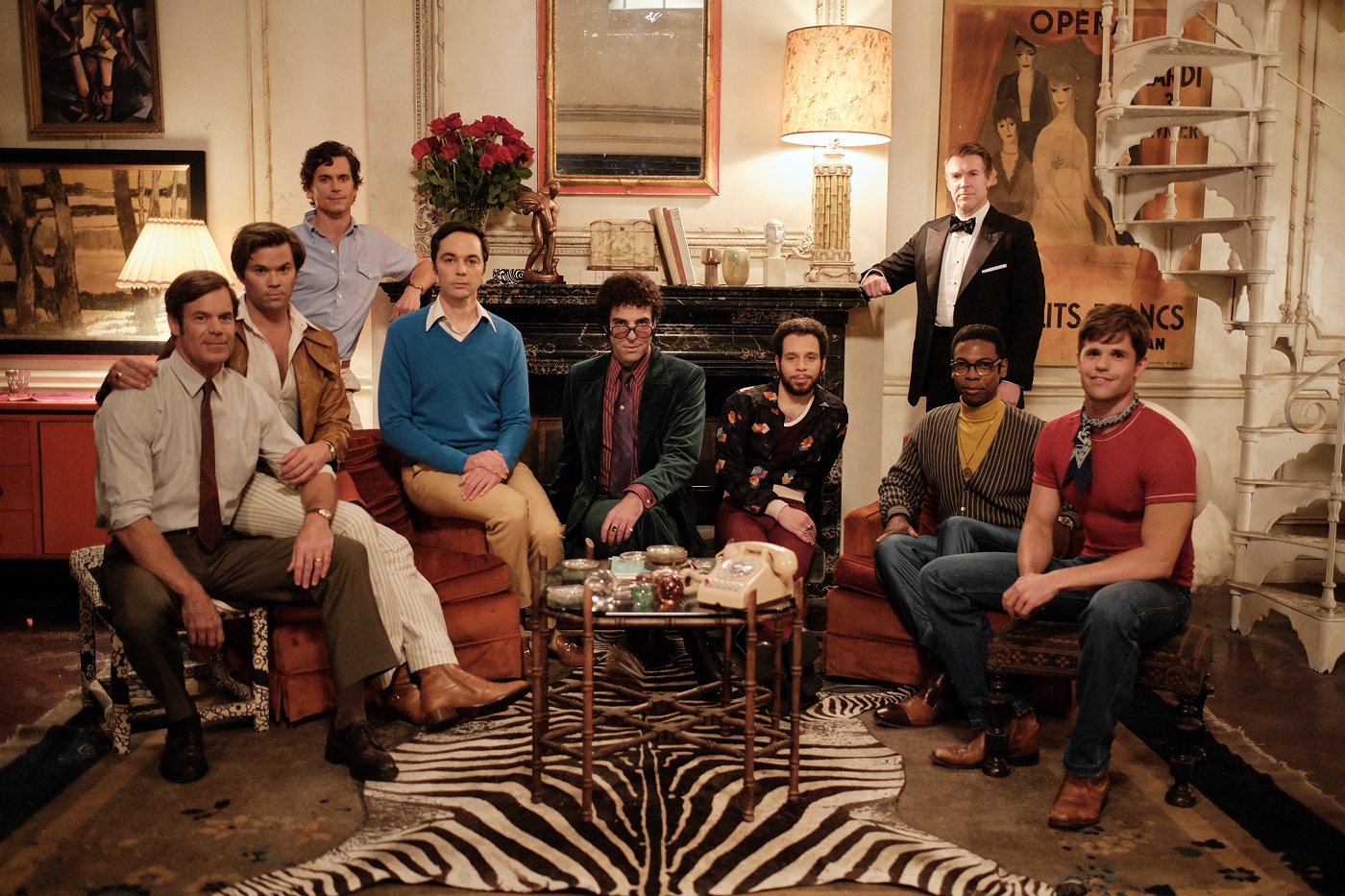 Film Review: The Boys in the Band

The Boys in the Band
Director: Joe Mantello

I have to be honest. If I had realized that The Boys in the Band was yet another Ryan Murphy production, I wouldn’t have requested a screener. Hollywood was full of Hollywood phoniness and exploitation, and Ratched was just wretched. I was not ready to sit through more.

The Boys in the Band is, thankfully, the best of the mega-producer’s projects for Netflix this year, having come with a famous script that predates him, thus minimalizing his artistic influence. This is the second film version of the 1970 stage play by Mart Crowley, about a group of gay friends who reunite in an Upper East Manhattan apartment belonging to Michael (Jim Parsons, The Big Bang Theory) to celebrate the birthday of his best frenemy, Harold (Zachary Qunito, Star Trek), who is less than enthusiastic about his age and feels that he is losing his touch when it comes to landing the best-looking men.

The evening gets considerably more complicated when Michael’s college roommate, Alan (Brian Hutchison, The Sinner, Blue Bloods) stops by with something he needs to tell Michael. But Alan doesn’t know that Michael is gay, and Michael has always gone to some effort to keep him in the dark. As the the night progresses, everyone learns more about each other—and more about themselves—than they ever imagined they could in one sad little party.

This version is directed by Joe Mantelloz, who helmed the 2018 Broadway revival, and features the same cast, all of whom are prominent, openly gay actors. This latter fact adds some serious depth to the material, and there’s no question that the acting is the reason to watch The Boys in the Band. There’s denying that Parsons is emoting his heart out, but there’s also no denying that for me, he’s becoming tedious—if I have to see him play one more lonely, self-obsessed little snot I’m going to scream. He does have some strong moments, but for once I’d like to see him as a truly likable, caring person. Quinto is equally hampered by the obvious associations to his most famous role, and perhaps even more so by the fact that he looks like someone left the message “Boys in the Band. You’re Harold” on his answering machine, and he somehow mistook that to mean he was supposed to dress up as Harold Ramis playing a lounge lizard.

Parsons and Quinto are good, mind you, but truth be told, I found most of the rest of the cast to be far more memorable. Matt Bomer (White Collar) seems incapable of giving anything less than a natural, believable performance, and Robin de Jesus’ performance as Emory, the most cliched and over-the-top character who ends up being so much more, is heartbreaking, and for me, he made the … I was going to say “film,” but I just can’t bring myself to use the term. This doesn’t feel much more like a movie as opposed to a stage production captured on video than Hamilton did, despite the presence of veteran cinematographer Bill Pope (The Matrix, Spider-Man, Baby Driver). Mantello directs it like a stage play, apart from periodic, over-stylized cut aways that have Murphy’s self indulgent “Get a load of my genius” style written all over them to an annoying point.

The Boys in Band is a great script for the stage that doesn’t entirely work on screen, but there’s no get around the fact that it was daring in its time. Every time I started thinking it just didn’t play now, it proved me wrong with a poignant and powerful moment. Even the TV-MA rating description makes a statement about rampant homophobia in our culture, with the designation of “graphic nudity” existing as industry standard code for “Penis Alert.” I can’t decide who is most degraded by this choice of wording, but it’s a pet peeve of mine.

The Boys in the Band is hit and miss, and longer than it needs to be, but there’s enough raw truth and insight in the material—and the stellar performances—to make it worthwhile viewing. But if I need a theatre fix right now, it’s safe to say that personally, I’ll be choosing Hamilton every time. –Patrick Gibbs