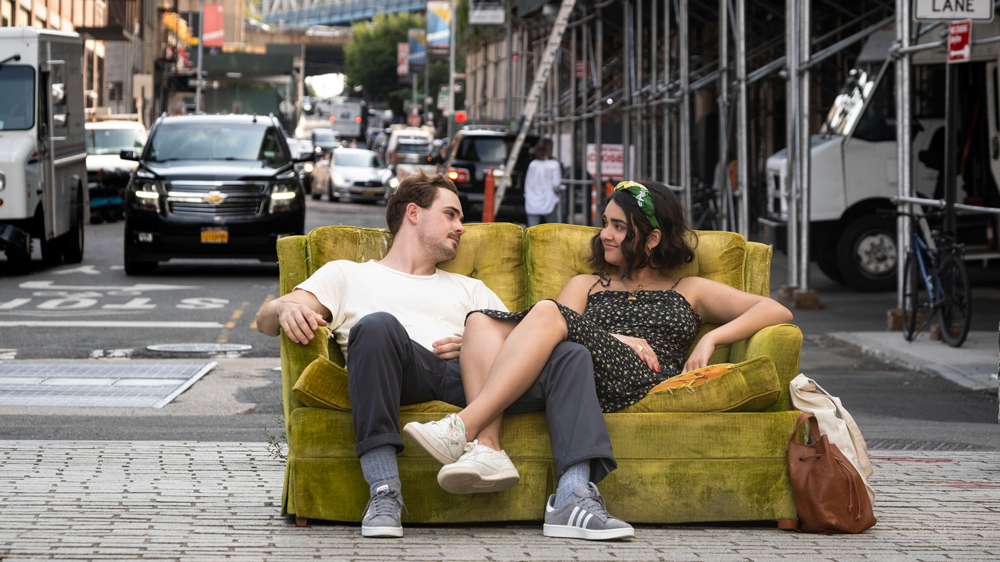 Photo Courtesy of Stage 6 Films and No Trace Camping

Now that Tenet is finally playing everywhere—except for the places where it is not—the floodgates have been sort of partway opened, almost, in a way. (But not entirely.) The nation’s movie theaters are semi-open, and Hollywood is borderline ready to fill screens with films that, technically speaking, we haven’t seen before. But the feeling of “been there, done that,” as of yet, has not been broken in any substantial way. Now, to solidify that feeling that we are just getting paint-by-numbers filmmaking, this weekend, our big new release is the latest in a long line of tropey dopey rom-coms starring a plucky protagonist named Lucy.

The Broken Hearts Gallery follows Lucy Gulliver (Geraldine Viswanathan, Blockers, Bad Education), an art gallery assistant living in New York City, who also happens to be an emotional hoarder, saving mementos from every relationship. After getting dumped by her latest boyfriend, Max (Utkarsh Ambudkar, Pitch Perfect, We Are Freestyle Love Supreme), she climbs into the car of a stranger named Nick (Dacre Montgomery, Power Rangers, Stranger Things), mistaking it for her Lyft. Quick, Robin: To the Meet Cute Mobile!

After an appropriate period of wallowing, Lucy resumes her life, but she keeps accidentally running into Nick—shocker, I know—and one day while hanging out in the hotel that he is trying to refurbish, she comes up with the idea to create “The Broken Hearts Gallery,” a pop-up space for the items love has left behind, and she builds it on the wall of the hotel. Lucy becomes obsessed with her new project, and soon, news of the gallery spreads, encouraging a movement and a fresh start for romantics who must finally move on to a better life—and just maybe, one of them might be Lucy herself.

Writer/Director Natalie Krinsky, who is best known for writing episodes of Gossip Girl and one for Grey’s Anatomy, drew on personal experience in conceiving the story that would be her big-screen directorial debut, which is nice, but it’s very clear that she also drew on (500) Days of Summer, Sex and the City, and a very large chunk of the careers of Sandra Bullock, Kate Hudson and Reese Witherspoon.

Viswanathan is a likable presence who could really do something with better material, but Lucy is such a generic character that the result is a bit flat, and I blame that in part on tentative direction. Montgomery, a talented actor with a lot of potential for big things, fairs a bit better, but still struggles with bringing any dimension to his role. Meanwhile, the supporting cast is given nothing of substance to do, which is particularly unfortunate in the case of the immensely talented Phillipa Soo (Eliza in Hamilton), stuck in a one-note, one-joke character, and Ambudkar, another great Broadway talent who was intended for the role of Aaron Burr. and is little more than a prop here.  He provides you with someone to hate, and by far the biggest thing I got out of this was an urge to watch Hamilton again.

The best thing that The Broken Hearts Gallery has going for it is relatability, in that most of us have had those moments where we struggle to know what to do with keepsakes that are of little value to anyone else but are attached to a memory we just can’t throw away even if we want to. The gallery itself is a concept that had potential to be the basis for a better and far more emotionally rewarding film. As it stands, at least it’s innocuous, and just pleasant enough as a formula film, that it may be just enjoyable enough to please its target audience. –Patrick Gibbs