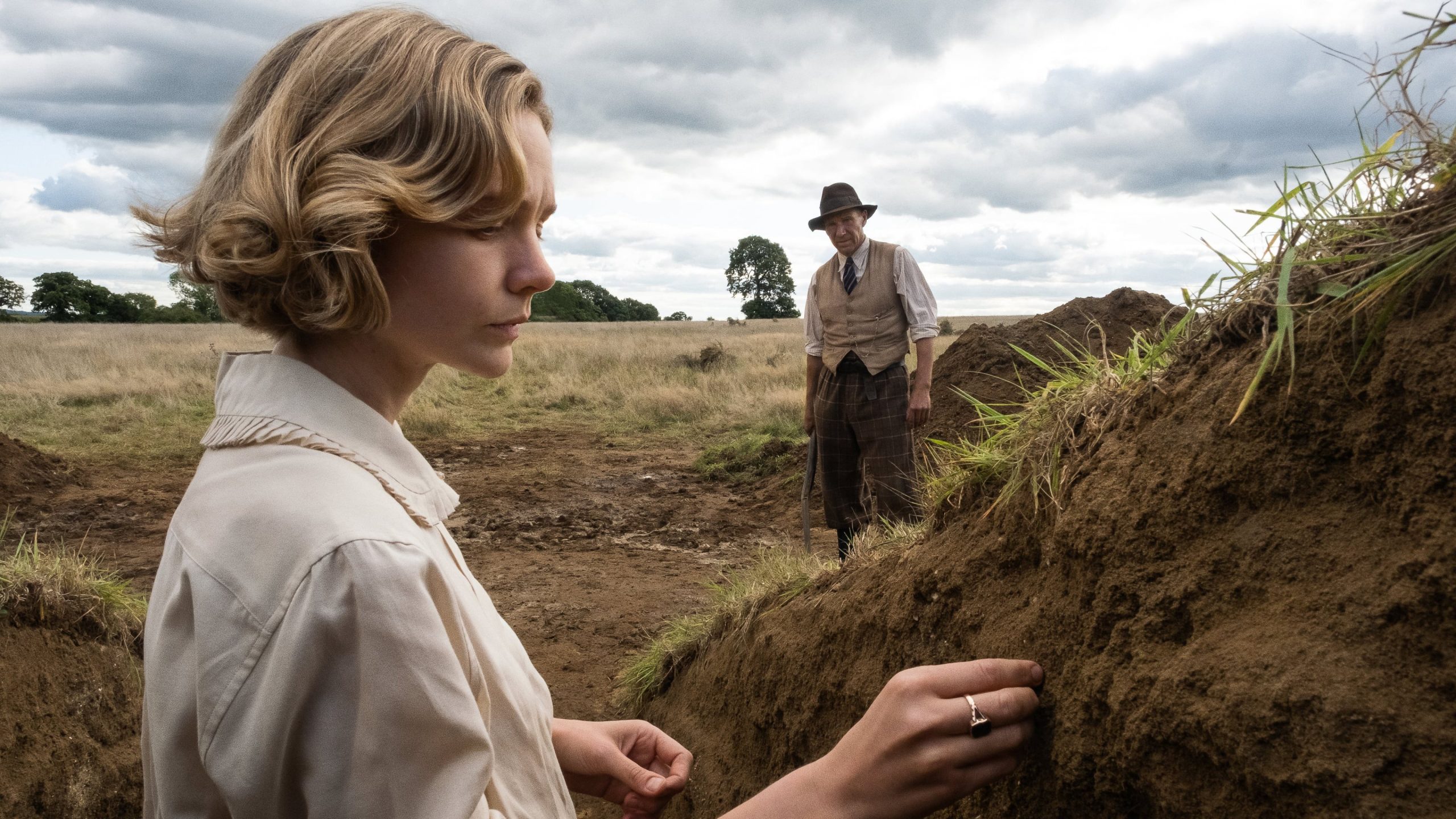 It really didn’t take anything beyond the names Ralph Fiennes and Carey Mulligan, and the word “archaeology” to get me excited about The Dig. It’s a new film from Australian director Simon Stone (The Daughter) and chronicles the most famous archaeological finds of the 20th century. The presence of two of my favorite actors and a subject that has fascinated me since I was 7 years old had me completely hooked, and I tried to keep my expectations from getting unrealistically high.

The Dig, adapted from the historical novel by John Preston, takes place in 1939 as the storm clouds of the Second World War are forming over Europe. In Sutton Hoo, an area of English countryside near Woodbridge in Suffolk, a wealthy widow named Edith Pretty (Mulligan) hires self-taught amateur archaeologist Basil Brown (Fiennes) to do some excavation work on her estate. Edith’s son, Robert (Archie Barnes), follows Brown like he was his shadow, and Brown develops a bond with the spirited and inquisitive youth. Brown believes that the estate holds burial mounds, and though initial digging proves fruitless, he makes an astonishing discovery under one of the mounds: the centuries-old remains of a ship. It may be a viking ship, though Basil has a hunch it goes back even further and that’s Anglo-Saxon in origin.

No sooner is the discovery made than interested parties from all over start to swoop down on it, including one Charles Phllips (Ken Stott, The Hobbit trilogy) of the British Museum, and he takes over control of the dig as a matter of national-historical significance. Although, as it’s still on Mrs. Pretty’s land, she does have some say. To Phillip’s chagrin, she insists that Brown remain on as a key member of the team. As the dig proceeds, more incredible discoveries are made.

The first hour or so of the film is a joy, as we get to know the lead characters and experience this amazing discovery with them. Fiennes is cast very much against type as the aging, somewhat odd, lower-class rural man, in stark contrast to his English Patient days where he was frequently cast as the smolderingly handsome, brooding leading man who has a torrid affair with someone’s wife. While Mrs. Pretty is hardly one of Mulligan’s most complex characters, she is immensely likable, as is Barnes, and watching the excitement build as these wonders are unearthed had me glued to the screen more so than any action or suspense thriller I’ve seen in a while.

But in the second half, in terms of the story, it starts to feel like less and less of substance is unearthed, and it plays as if some studio executive wandered onto the set and said, “Hold on. If Ralph Fiennes is in this, and everyone is so damned British, how come nobody is in an unhappy marriage? Bring me Lily James in a bathtub, right now!” Enter Stuart Piggot (Ben Chaplin) and his young wife, Peggy (James), as well as Mrs. Pretty’s cousin Rory (Johnny Flynn), all of whom are working in various capacities on the excavation.

James is a personal favorite whose presence is welcome in almost anything, but this movie simply didn’t need her, nor does it make good use of her. The Peggy plot thread takes the entire movie off course, and it starts to feel like two separate films that have been hastily cut together, and the soap-opera element—though kept within a PG-13 boundary—detracts from the focus of the film. The juggling of these plotlines undoubtedly worked better in the novel, but on film, it’s a bit of a mess, and screenwriter Moira Buffini (Jane Eyre) and director Stone fail to make at all come together.

The worst part is that this fact means there’s not nearly enough time devoted to Fiennes or Mulligan in the second half, and they are sidelined just when we start to feel like we’re about to start to get to know the characters—whom, unfortunately, we never do. It’s a shame, because their stories are far more interesting. And while the metaphor of the discovery of artifacts symbolizing immortality and the marks we leave on this world—even when our time is cut short—may be a bit heavy-handed, it’s both heartfelt and effective.

The cinematography and score are first-rate, and The Dig is an altogether well-made film that has a lot going for it. I still recommend it despite the frustrating detour. It’s a good film with a nice message about the indelible imprint we leave on the world and upon each other. But without the ill-advised deviation from the focal point, this could have easily been a minor classic. In archeology, it’s easy to get distracted by shiny objects, but one should should always keep their eyes on the prize. –Patrick Gibbs