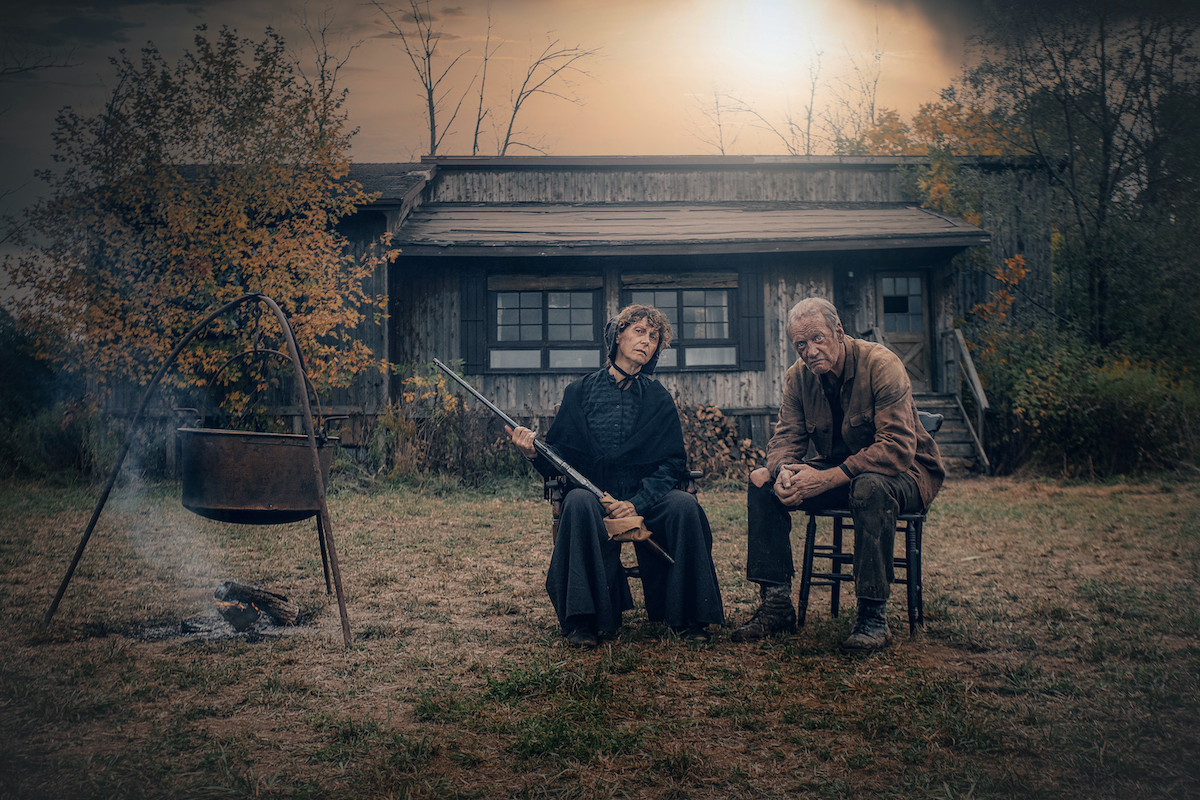 The opening scene of Dan Slater’s The Family sets the tone for the rest of the movie: A young man collapses in the mud from exhaustion, and the patriarch of the titular Family punishes the boy for simply not having the strength to work their secluded farm. After shoving Elijah’s (Onyx Spark) face into the filth, almost drowning him, the imposing Father (Nigel Bennett) spews some religious vitriol and drags the boy off to the horror of his three siblings.

Judging by the reactions of the “children”—who all seem to be comfortably in their late teens—Elijah’s fate seems to be sealed, though no further explanation is given as to what that fate may be. Most of the movie follows in variations on this theme: a minor transgression followed by Father’s punishment and religious ramblings, followed by the children reckoning with that punishment that does little to piece all of these things together other than reinforce the idea that “Father is a really bad guy.”

Set in what appears to be somewhere around the nineteenth century, The Family follows a small group of fanatical settlers whose actual familial relationships are dubious—the four children (with the exception of Elijah) seem to be around the same age, two of which are people of color while the matriarch and patriarch of the group (aptly known as Mother and Father) are both white. This questionable dynamic immediately raises some red flags, as do some other details about the Family’s arrangement. The borders of their property are lined with animal bones, and Mother and Father warn that if any of them are to cross the line, they will incur the wrath of their deity, who is protecting them from Abaddon, which is their faith’s version of the Devil.

The circumstances in the first 30 minutes of The Family quickly make one’s mind wander to M. Night Shyamalan’s The Village, where an isolated community is forbidden from leaving their village as unseen monsters prowl the borders from the surrounding forest. I wish the similarities stopped there. Perhaps it is intentional on the part of Slater, but that film’s big twist looms heavily over the bulk of The Family. The thinly veiled idea that something isn’t quite as it seems feels like a means to an end, setting up a reveal mid-way through that’ll bear consequences for the rest of the film. However, when that reveal comes, it is never explicitly addressed again and we just return to Father’s ramblings and religious abuse.

The Family is clearly a film with some big ideas. Religious themes naturally play a huge role, and “praise be” seems to be a catchphrase. The Family’s nontraditional names for their God and Devil are interesting world building, but the language and imagery around these figures doesn’t seem to really diverge much from typical Christian ideas. Their community seems very patriarchal until some subtle interactions between Father and Mother imply that the latter may be calling the shots, though to what end the viewer will never know. Mysterious and foreboding sounds coming from the sky end up having rational explanations.

Admittedly the film isn’t entirely without merit—most of the major issues lay within the plot, which is a big problem. The costumes and set design are great, convincingly placing the viewer in a desolate, pre-industrial landscape. While the dialogue seemed to shift in and out of being period-appropriate, one could excuse this as possibly being intentional as the film reveals. Scenes weren’t always immaculately lit, but even when the lighting was a bit low, it added to the atmosphere.

The Family is a film overflowing with interesting ideas: mysterious variations on Chrisitianity, a young woman entering the Family ostensibly of her own will with no memory of her life prior to joining, a mysterious and threatening world outside the confines of the farm. But, it is so overstuffed that it fails to flesh out any of them. Slater only seems interested in the final showdown with Father, whose motivations are so ill-defined it wouldn’t be unfair to assume he’s just unreasonably cruel. The religious critiques, the potential threats outside of the farm, and ultimately whatever the film was trying to say are all obscured to drive home this basic premise that was clear from the beginning, and whose resolution was almost predetermined and unsatisfying.

The “period horror about a family destroying itself due to religious paranoia” has already been done well with Robert Eggers’ The Witch. The “period horror that turned out to be a little more complicated than it appeared” has already been done well with The Village. Unfortunately, The Family mostly feels like a lesser cocktail of these better movies. –Brandon Ermer