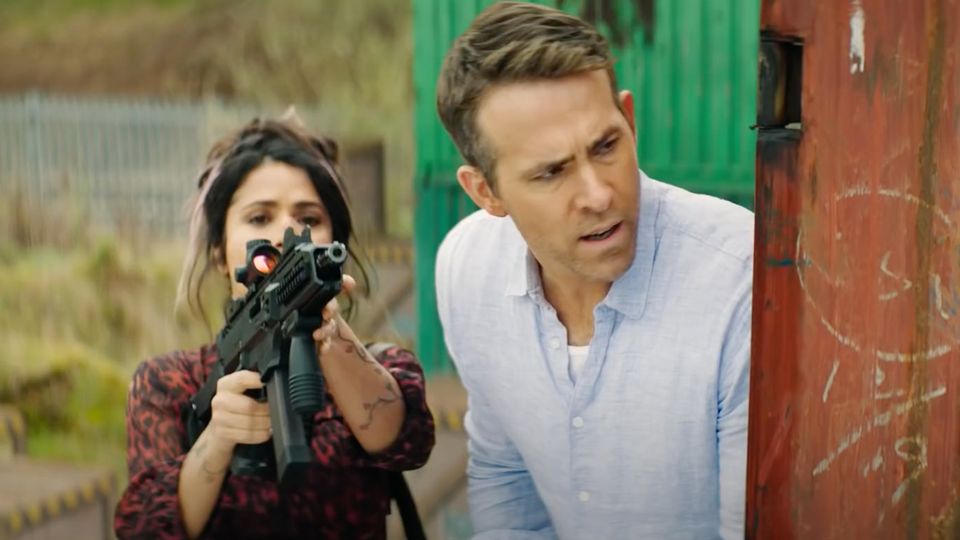 When you put out an average of four to five reviews a week, it’s hard to avoid overusing certain words. One of my favorite descriptives is “disposable” because it describes the nature of so many Hollywood movies: adequate enough for a single viewing, but easily tossed aside. I’ve tried over the past six months to use it less often, but I feel like The Hitman’s Bodyguard 2017 action-comedy is the epitome of a disposable movie, and its sequel, The Hitman’s Wife’s Bodyguard, is even more so. It’s like a moist towelette—stupid and gross but more or less functional.

In The Hitman’s Wife’s Bodyguard, the world’s most lethal odd couple—bodyguard Michael Bryce (Ryan Reynolds, Deadpool) and hitman Darius Kincaid (Samuel L. Jackson, Pulp Fiction, Captain Marvel)—are back on another life-threatening mission. Still unlicensed and under scrutiny, Bryce is forced into action by Darius’ even more volatile wife, the infamous international con artist Sonia Kincaid (Salma Hayek, Desperado, Frida, Beatriz at Dinner). As Bryce is driven over the edge by his two most dangerous protectees, the trio get in over their heads in a global plot and soon find that they are all that stand between Europe and a vengeful and powerful madman named Aristotle Papadopolous (Antonio Banderas, The Mask of Zorro, Pain and Glory).

While The Hitman’s Bodyguard is stupid, vulgar and ultra-violent, it is—and here I am being kind, more or less—a movie. The Hitman’s Wife’s Bodyguard throws any attempt at taking any of this even semi seriously out the window and descends into self-parody in the style of Gremlins 2: The New Batch, but without the sense of restraint. It’s loud, frenetic, shockingly violent and profane, and completely nonsensical. The first 40 minutes were a mixture of eye rolling and boredom, but a strange thing happened to me midway through the film. I started laughing.

I felt guilty about doing so, and wasn’t even sure why I was amused, except for the fact that Reynolds is a funny guy, and no matter how stupid this movie got, when he’s talking about the prospect of Sonia as a mother and says, “I would not leave a Chucky doll in her care,” yes, I found myself chuckling in spite of myself. No doubt, part of this is because the experience of watching a comedy with an actual audience was very much a novelty at this point in time, and also because my expectations were so low, but Reynolds and Hayek seem to be having enough fun just goofing around that there was an element of guilty pleasure for me.

Banderas’ is mildly amusing in poking fun at his own persona. Jackson is just doing the Jackson thing dialed up to 11, but Morgan Freeman, playing a character whose identity I won’t spoil, actually has a certain level of energy in this film, something I don’t even expect from him anymore, and it’s nice to see. Frank Grillo (Captain America: The Winter Soldier, The Grey) on the other hand, is pretty terrible as a Federal agent who is supposedly from Boston and sounds like a cross between an Italian-mobster stereotype and the Kripke character from The Big Bang Theory.

Director Patrick Hughes, who helmed the original, is mostly interested in making things go boom and showing off Hayek’s cleavage, with telling a story being, at most, an afterthought. The Hitman’s Wife’s Bodyguard is a loud, frenetic, obnoxious mess that seems aimed at 12–14-year-old-boys watching it on a sleepover without their parents’ knowledge. The way it equates graphic violence with humor would be disturbing if it were possible to think and watch the movie at the same time. It definitely reaches a point where it becomes too ridiculous, even by its own standards. But as an extreme guilty pleasure, with the major qualifier that you must be a Ryan Reynolds fan, it’s watchable once, but it’s like a joke that you laugh at then say, “Don’t ever tell that joke to anyone again.” –Patrick Gibbs