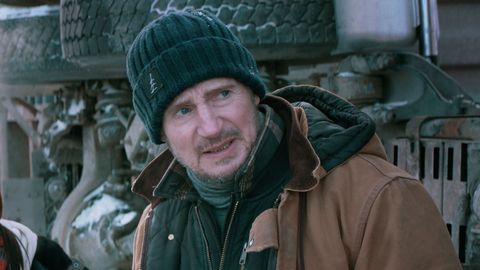 There was a time when attaching Liam Neeson‘s name to a movie meant that you were going into something with serious aspirations. Hopefully, that time is coming again, as the aging star has claimed to be moving on from the action-hero phase of his career. Until that happens, films like The Ice Road will continue to come along, doing their best disappoint those of us who are dumb enough get our hopes up for them.

The Ice Road stars Neeson as Mike McCann, a trucker who’s experienced at driving over ice. He’s enlisted as assitance after a remote diamond mine collapses in northern Canada and leaves a group of miners trapped with only 30 hours of oxygen. Legendary ice trucker Jim Goldenrod (Laurence Fishburne, The Matrix, What’s Love Got To Do With It?) assembles a rescue team comprising Mike, his younger brother, Gurty (Marcus Thomas, The Forger, Kill The Irishman), a gifted mechanic coping with aphasia; and Tantoo (Amber Midthunder, Hell or High Water, Legion), a fellow ice road expert whose brother is trapped in the mine.

The crew is tasked with the dangerous mission of driving across an ocean of thin ice in 18-wheeler trucks to deliver lifesaving drilling equipment before the oxygen runs out. But there is another, more sinister threat to their daring plan waiting to emerge in the form of surprise bad guys whose identities are so obvious that they might well all be wearing matching “Evil Bastard” T-shirts. Forced to conquer a litany of obstacles including stalled engines, cracking ice and violent pressure waves, Mike and the team race to get to the mine before they end up beneath the ice.

Writer-Director Jonathan Hensleigh—who started out writing episodes of The Young Indiana Jones Chronicles before penning the scripts to Jumanji, Die Hard with a Vengeance and The Rock—was a rising star behind the camera in the ’90s, but his big break as the director with 2004’s The Punisher proved to be a major disappointment, and The Ice Road is only his third feature at the helm. Hensleigh the director is hampered by the tendency of Hensleigh the writer to overcomplicate his stories with too many twists and turns, and what had great potential as a tense adventure about a race against time and the elements gets bogged down by cheesy plotting and entirely unnecessary villains who are thrown in just to give Neeson someone to punch.

The veteran actor is reliably effective as the kind of gruff, heroic and morose character he can play in his sleep, and Fishburne and Midthunder both give solid performances as well. Thomas does his best with a stock character and has a certain chemistry with Neeson, and for the first 35 minutes or so, The Ice Road really feels like it’s going to work.  Especially of note is the picturesque and atmospheric cinematography by Tom Stern (Mystic River, Million Dollar Baby, Sully), and the effects are well-done.

But unlike the drivers in the story, Hensliegh won’t follow a straight course, and his bad choices ruin what could have been a fun movie. As it stands, The Ice Road is moderately enjoyable but never rises much above that kind of faint-praise territory. Perhaps I shouldn’t have let my expectations get too high, but the trailers had me daring to hope for a nice change-of-pace movie with a distinctive feel, but Hensleigh falls back on tropes and crutches again and again. It’s a shame because, as a director of action and suspense, he has some nice moments.

Netflix isn’t doing The Ice Road any favors by pitting it against F9, and while it may be a less ridiculous ride, it’s plenty silly in its own right and not nearly as fun. The best that can be said for The Ice Road is that it’s short, it’s got Neeson and Fishburne in it and comes free with your Netflix subscription, so at least you won’t feel like you’re out much if you decide to watch it—but that’s a pretty poor excuse for a recommendation. It’s time for Neeson to hang up his “particular set of skills” and return to being a dramatic actor. If he’s not going to do another Schindler’s List, at least go for something as fun as The A-Team again, because he has been driving aimlessly for far too long. –Patrick Gibbs