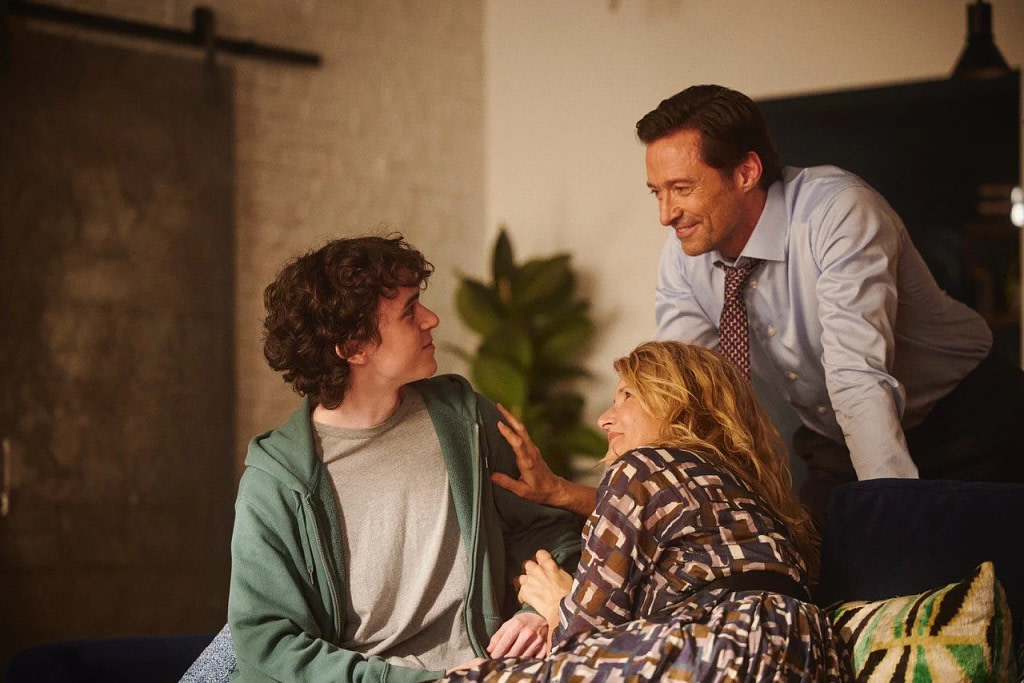 It’s not often that I find myself watching sad movies, at least not since I was in middle school obsessing over movie adaptations of John Green novels and romances like Stuck in Love. As a result, I am going to make an extremely dramatic statement: The Son is the saddest movie I have ever seen.

The Son is the prequel to The Father (2020), loosely based on Writer-Director Florian Zeller’s 2012 play Le Père. The two films are independent of one another as they explore two entirely different stories, yet both concern the complicated relationships between a parent and child and the trauma and pain we may face at any age and at any time. The Son deals with the difficult relationship between teenage Nicholas (Zen McGrath) and his divorced parents Peter (Hugh Jackman) and Kate (Laura Dern). In the aftermath of the divorce, Nicholas struggles with severe depression. In an attempt to make a life change, he decides to move in with his father. Peter welcomes Nicholas with open arms, but with a newborn son, a new relationship and a time-consuming career, Peter finds himself grappling to juggle it all and make informed decisions.

This film will undoubtedly not be for everyone, but you should surely plan on leaving the theater having shed a few tears. However, the story occasionally undercuts its own sense of authenticity. Nicholas’ character was a moderately straightforward, stereotypical illustration of a teenager suffering from depression. There is little depth to Nicholas, and The Son exploits such a weighty topic for an audience’s reaction for pure entertainment with back-to-back scenes just begging you to cry (which you will) as if it were a teen drama. It feels like writers Zeller and Christopher Hampton weren’t exactly knowledgeable about the intricacies of teenage mental health, which is emphasized by McGrath’s portrayal. His unconvincing monologues would often distract me. At other times, he’d successfully shatter my heart into a million pieces. This is a major and difficult role to play, so the inadequate character development and performance knocked The Son down multiple notches. Jackman and Dern’s performances elevated the experience to the point where I sobbed into my popcorn anytime I caught even a glimpse of Jackman’s sorrowful gaze as he holds in his tears. The two lost parents are faced with very difficult decisions, and a wrong turn could lead to devastating consequences.

I thoroughly appreciated The Son’s ability to approach the portrayal of parenthood in a somewhat original manner. These two characters represent different ways of hurting, coping, nurturing—knowing what is best for a child is not black and white. While you can likely predict the plot progression, you still find yourself as entrapped in the two character’s challenges and pain as they are. There are a handful of decisions made that serve the plot well, such as Peter’s relationship with Kate and his new partner Beth (Vanessa Kirby) and the complexities of infidelity and parenting—more specifically, how to parent opposite of how Peter was raised. A huge positive to The Son was its score. World-renowned Hans Zimmer joined the team to construct a tragic, captivating sound to pair with its stinging subject matter.

In The Son, Anthony (Anthony Hopkins)—The Father’s protagonist—makes an appearance as Peter’s distant, cold father who is newly dealing with some undisclosed health problems. Anthony only appears briefly in the film, but he plays a vital role in the trajectory of the script. The Father followed Anthony as he struggled with dementia and his daughter, Anne (Olivia Colman), who attempts to care for him and find the right caretaker. The Father and The Son are two entirely different stories, and Peter does not make an appearance in the 2020 film at all, but they’re tied together by one string, one family.

The Son deserves a B+. I thoroughly enjoyed my viewing experience, and it succeeds in what it sets out to do—make its audience emotional—but it doesn’t live up to The Father’s complex narrative that allows you to piece the puzzle together alongside Anthony. The Son has its positive elements, but its straightforward approach to a story we have seen time and time again (even coming from the sad flick newbie here) is a daring and disappointing decision, especially following the triumph that is The Father. –Birdy Francis