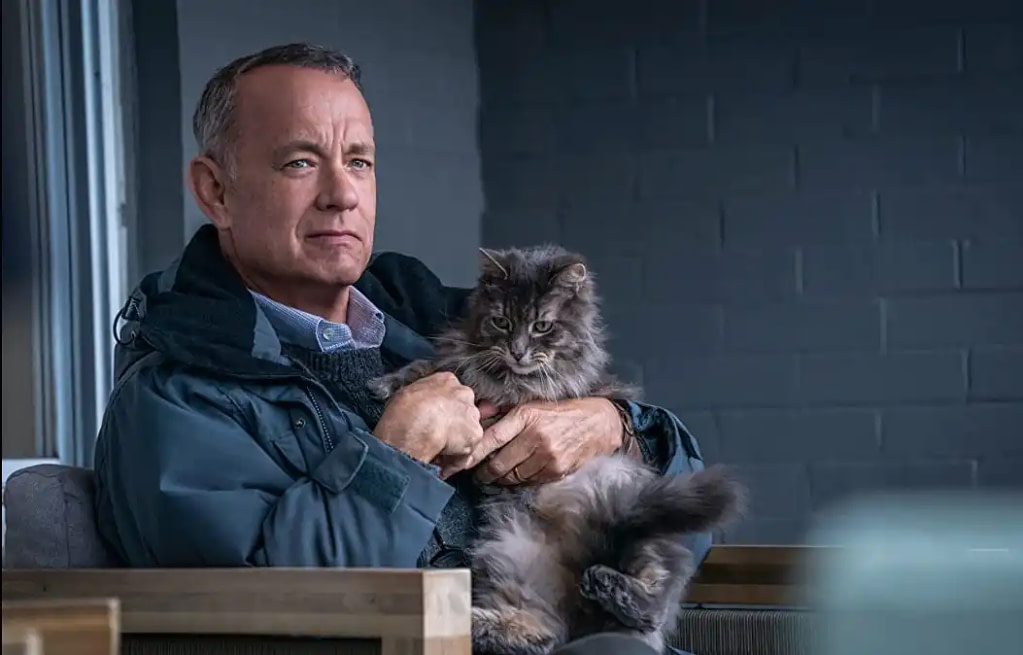 Playtone and SF Studios
In Theaters: 01.06

It’s early January, which means two types of movies: cheap, bargain basement horror and Oscar leftovers. Oscar leftovers rarely represent the best,  and A Man Called Otto isn’t going to be a Best Picture contender, though it does stand a chance at Best Actor nomination, and it has a lot going for it.

A Man Called Otto is the Americanized version of A Man Called Ove, a best-selling book turned Swedish-language film. Tom Hanks plays Otto Anderson, a grumpy widower with an adversarial relationship to everyone he meets. Otto finds the world to be stale, flat, and unprofitable, to paraphrase Shakespeare, and he’s looking at taking the “not to be” option, planning and even attempting various methods for ending his life.

A proverbial monkey wrench is thrown into the works when a couple with two small children moves in next door and Otto forms a reluctant bond with the friendly mother, Marisol (Mariana Treviño, Amor de Mis Amores), who is determined to be his friend whether he likes it or not. While Otto’s anger and sorrow over the loss of his wife cause him to put up barriers everywhere, Marisol and her two little girls pull them down.

Director Marc Forster (Monster’s Ball, Finding Neverland) and screenwriter David Magee (Life of Pi) are out to tug at your emotions, and their work runs the risk of feeling manipulative. However, A Man Called Otto plays surprisingly well. Between Hanks’ marvelous central performance and the mix of dark comedy and feel-good filmmaking, this could almost have been a Christmas movie given the winter setting and Otto himself being an interesting mix of Ebeneezer Scrooge and George Bailey from It’s A Wonderful Life.

The film is involving, frequently touching and filled with characters I found myself caring about. It is, however, potentially triggering to anyone who has ever dealt with suicidal thoughts or the loss of a loved one to them, and it’s essential to go into the movie prepared for the fact that you’re going to see Otto make multiple attempts and to think about how that’s going to make you feel. In the interest of context (and because I feel strongly about this point), I’ll share that I’m one of those people, and I definitely found it to be triggering. I also liked the film enough that I’ve seen it twice now.

The ensemble cast is quite capable, with the standout being the charming Treviño, who has terrific chemistry with Hanks. A younger version of Otto, portrayed by Tom’s 26-year-old son, Truman Hanks, is frequently seen in flashbacks. While the younger Hanks lacks the charisma of his father, he’s quite effective in the role and has the mannerisms down pat. More crucial to making these sequences work is Rachel Keller (Legion, Fargo) as Sonya, Otto’s late wife, and she easily succeeds at making the audience see how easily she became everything that mattered to Otto. Perhaps the most essential element, aside from the elder Hanks, is the musical score by the great Thomas Newman (The Shawshank Redemption, Finding Nemo). Newman is virtually peerless when it comes to subtly and effectively stirring audience feelings through his quietly moving musical prowess, and a less experienced or disciplined composer could have spelled certain doom.

A Man Called Otto doesn’t rank as one of the very best films of 2022, though it’s quite a good one, and one that should connect well with mass audiences. It’s an excellent showcase for one of the top movie stars of the past 50 years and a poignant study of loneliness, despair and love. –Patrick Gibbs