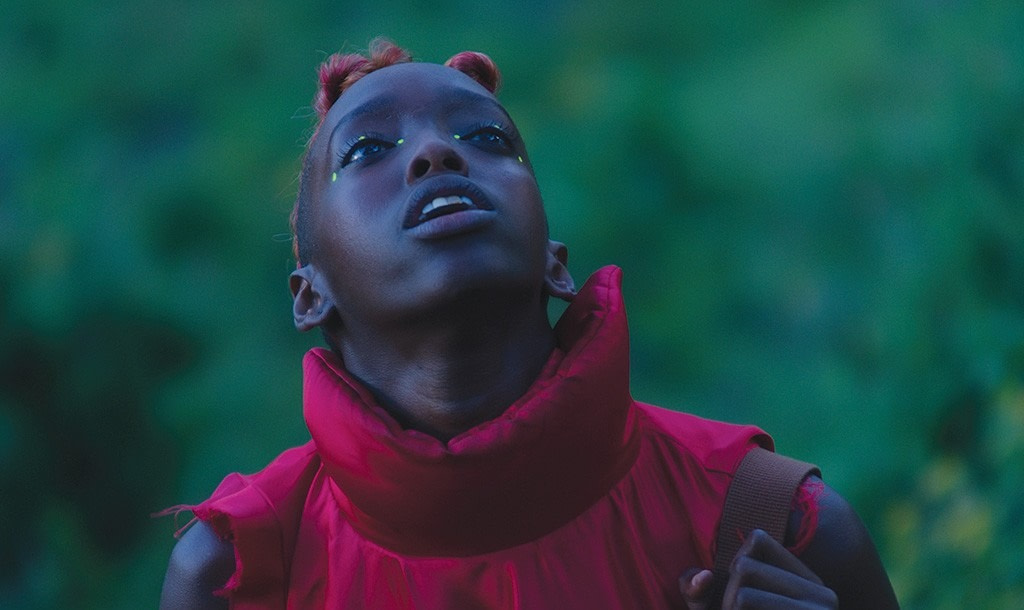 The human journey is never linear. It twists, bends and sometimes leaps through dimensions, creating complex personalities that makeup who we are. Neptune Frost is one of the rare movies that is able to capture something new about the human experience through the lens of marginalized artists speaking out for social and sexual liberation. Rather than following a linear plot, Neptune Frost guides the audience with visceral music and stunning cinematography.

The film takes place in an afro-futurist society that is both tragic and vibrant. This society runs on coltan, the metal that powers cell phones and other electronics. After seeing his brother killed over a generous piece of this precious metal, Matalusa, played by Bertrand Nintereste, leaves behind his life as a miner and dreams himself into another dimension. At the same time, Neptune (played first by Elvis “Bobo” Ngabo then Cheryl Isheja) flees their own village and is reborn as an intersex hacker. Together but separately, our two protagonists find their way to a mysterious village that exists outside of space and time. The residents of this village include anti-capitalist rebels such as Memory (Eliane Umuhire) and Psychology (Trésor Niyongabo) and more. Together, the tribe threatens to end their oppressive relationship with “The Authority” and liberate us into a new way of thinking.

This movie demands to be experienced moment by moment, with each second revealing another layer to this extremely dense world. The costumes by Cedric Mizero are unlike any I’ve seen before and perfectly combine bold colors and rich fabrics derived from African fashion with sci-fi elements like greeblies and other techno junk. Meanwhile, the set design mirrors this fusion by using trashed computer monitors, old bike wheels and more to create beautiful set pieces that could be their own art installation themselves. Together these create a mirror image of our own society that is at once elegant and full of “trash.”

But this skillfully crafted world wouldn’t be complete without the music that brings it to life. Composed by writer and co-director Saul Williams, the music ties all the elements of the film together. Each note breathes life into the world and its characters, each of whom is nimbly played by the actors, providing a power to the film’s themes of liberation and disruption through their emotional delivery of Williams’ songs—each one creating harmonious discord by pulling from an array musical styles like techno-synth, rap and even classical musical ballads.

Williams and co-director Anisia Uzeyman expertly give life to each piece of the whole and allow the film to breathe with mindful precision. With each frame serving an intended purpose, the story unravels like a visual poem. As the credits roll, you feel like you’re waking up from a dream—unsure of how to proceed, with lingering thoughts of disrupting a societal binary that is forced upon us as complex non-linear beings.

Strap in, and prepare yourself for Neptune Frost. –Morgan Keller

Read more on afro-futurist filmmaking:
Black to the Future: Celia C. Peters Talks Afrofuturism: Blackness Revisualized
Director Jesse Noah Klein and his Actors Work Together “Like A House on Fire”