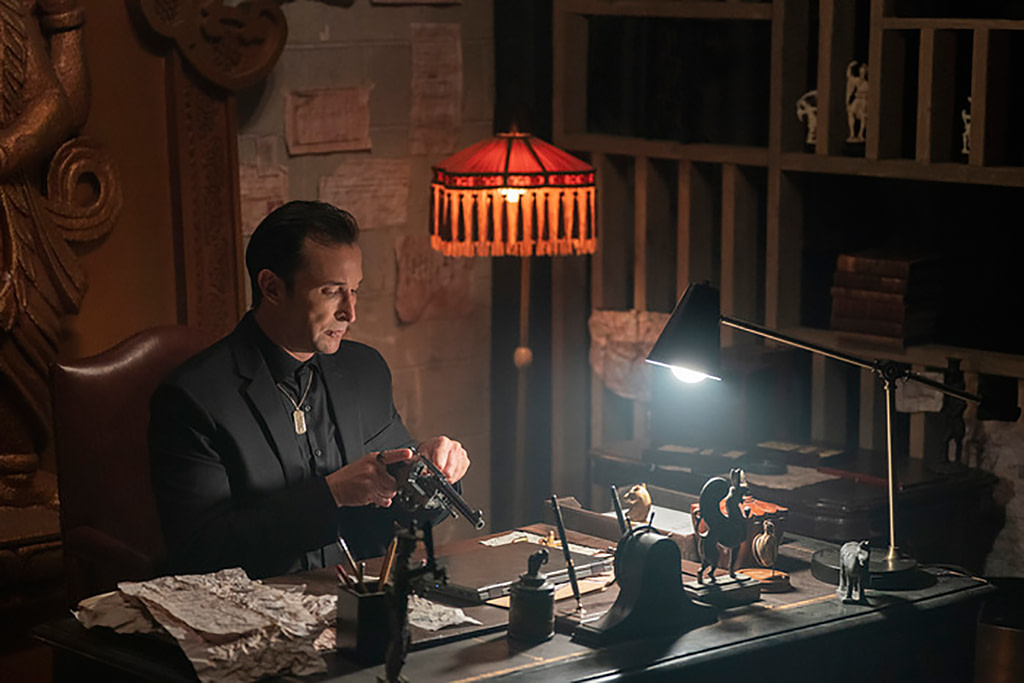 A new year means new beginnings—a theme that is central to the hit series Leverage: Redemption, now in its second season. A reboot of the popular cable TV hit Leverage, this iteration stars Noah Wyle as Harry Wilson, a former corporate attorney who specialized in ensuring powerful and corrupt clients walked away with metaphorical “get out of jail free” cards. In an effort to atone for his sins, Harry has joined up with the “Leverage” group, an elite team of Robin Hood–like con artists and thieves who use their skills to turn the tables on seemingly untouchable villains and serve out their own unique brand of justice.

“It’s been a really big learning year for me, both in front and behind the camera,” Wyle says. Leverage: Redemption season two has seen Wyle and Harry both stepping up their respective games, with Harry now a regular part of the team. “He’s no longer the new kid,” Wyle says. The actor compares Harry’s newfound confidence to the sophomore year of high school. “It was a very natural evolution for the character and gave me a whole new bag of tricks that I could play with,” Wyle says.

This season, Harry dons a variety of wigs, costumes and goofy accents, while Wyle himself has worn many figurative hats. The 51-year-old TV veteran, best known for starring on the long-running series ER, has directed multiple episodes of Leverage: Redemption, including two this season, and penned the script for the episode “The Walk in The Woods Job.”

While this wasn’t Wyle’s first time writing for the screen, he quickly learned that Leverage: Redemption has its own set of requirements. “It’s not just about the quality of the story or the dialogue, or the quality of the con you come in with. You have to make all that fit into a very specific recipe,” he says. “You have to have a very contemporary case that has a victim. It needs to be an emotional storyline for one of our characters, as well as the victim.” As if this wasn’t enough to bite off, Wyle adds that there must be a comic storyline running through it, and it all has to come at a count of 42 pages. The Leverage rulebook was a bit intimidating for Wyle at first, though he soon found that the support of showrunner Kate Rorick and the entire writer’s room made him feel at home.

As a director, Wyle was given one of the most pivotal episodes of the season, “The Pyramid Job,” which provided a chance for one of the show’s most beloved characters, the elegant and mysterious Sophie Devereaux (Gina Bellman), to explore new dramatic territory. A world-class grifter, Sophie is finally forced to confront her guilt over the people she’s hurt in her time as a career criminal. It’s all set against the backdrop of a comedic storyline spoofing the bizarre culture of multilevel marketing. “Gina had some interesting stuff that we hadn’t seen from her character before right in the midst of this really kind of silly, over-the-top con,” Wyle says. “When Leverage is working well, it’s working on both of those levels.”

“For Wyle, one of the most rewarding aspects of Leverage: Redemption comes in tackling serious themes that are relevant to the world we live in—toxic masculinity, police corruption or environmental issues—and doing it in a way that allows the audience to have some fun along the way.”

For Wyle, one of the most rewarding aspects of Leverage: Redemption comes in tackling serious themes that are relevant to the world we live in—toxic masculinity, police corruption or environmental issues—and doing it in a way that allows the audience to have some fun along the way. “It’s taking your medicine with two spoonfuls of sugar at the same time,” Wyle says, “and I think that’s a great way of imparting a message. I don’t think the shows that come off too preachy or too dogmatically reach the biggest audiences … If you can put a little message inside of a Trojan horse that looks like a comedy and run it up to the audience gates, you’ve got a much better chance of entering.”

The finale of Leverage: Redemption season two hits Frevee on Jan. 24, though it’s likely to be a short-lived goodbye: As critics and audiences alike have embraced this second season of sweeping criminal justice system reform as can’t-miss entertainment, you can bet that Harry, Sophie, and the rest of the team will be back to their old tricks soon enough.

Read more interviews with film directors:
Jonathan Kasdan on the Magic of Willow
A Humble Prayer: A Conversation With THIS WAS THE PLACE Filmmaker Nathan Manuel