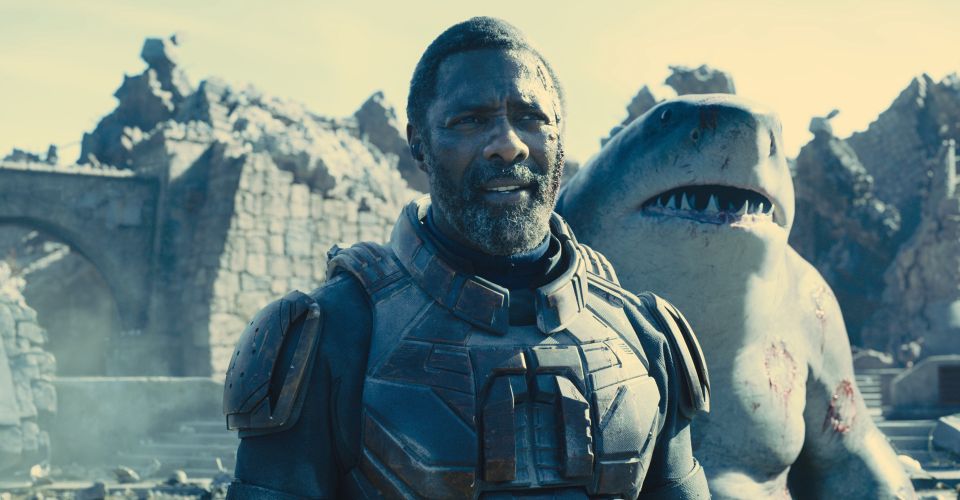 DC Films and Atlas Entertainment
In Theaters and Streaming on HBO Max 08.05

Early reviews have been pouring out for The Suicide Squad. If you simply skim Rotten Tomatoes, it appears that we have a classic on our hands. This is as good an example of how deceiving Rotten Tomatoes can be as I’ve ever seen.

The Suicide Squad—the follow-up to 2016’s Suicide Squad, which ignited the box office but was reviled by critics and a fair percentage of fans—begins on the island of Corto Maltese. Task Force X arrives for another do-or-die mission. The Squad is made up of prisoners from Gotham City’s Belle Reve prison, super-villains who get 10 years off of their sentence for every covert and questionable mission they complete.

Colonel Rick Flag (Joel Kinnaman, For All Mankind) leads a group of murderous oddballs, which includes Bloodsport (Idris Elba, Concrete Cowboy, Luther), Peacemaker (John Cena, F9: The Fast & Furious Saga) Ratcatcher 2 (Daniela Melchior), Savant (Michael Rooker, Guardians of the Galaxy), Harley Quinn (Margot Robbie, I, Tonya) and more. They go on a trek through a jungle teeming with militant adversaries and guerrilla forces, and all the while, Amanda Waller (Viola Davis, Fences, Widows) and her government techs are tracking their every movement. As always, one wrong move and they’re dead, whether at the hands of their opponents, a teammate or Waller herself.

Writer-director James Gunn (Guardians of the Galaxy) really gets the source material, and it’s the comic book war movie that it was always meant to be. He certainly injects the film with plenty of big, loud, manic energy. It’s funnier than the first film, but it’s not as funny as Guardians fans might be expecting it to be, incorporating just a pinch of that tone but skewing much more toward Gunn’s roots in films like Slither and Super, and it’s not for the squeamish.

That was to be expected, but such dull characters were not. One of the biggest problems is Bloodsport, who is indistinguishable from the original protagonist character, Deadshot, played by Will Smith in the first film. When the Fresh Prince of Belle Reve decided not to do the second movie, Gunn and DC opted not to recast the role so they could leave things open, should Smith wish to return for a future installment, but Elba’s character recalls the generic replacement for Steve Guttenberg when he left the Police Academy series. The total lack of investment I had in him killed the movie for me.

Meanwhile, Cena’s Peacemaker is a great character whose potential is woefully unrealized. Robbie is great, as always, in the role of Harley, and Sylvester Stallone steals the show as the voice of King Shark, a CGI shark-man who walks upright but isn’t very bright. But the most fully realized character by far is Ratcatcher 2, who has the power to summon rats and influence their every action. Melchior is memorable in the role, and she is by far the most sympathetic and interesting character, with the second being David Dastmalchian’s Polka-Dot Man, who is a deliberate mix of funny and disturbing.

But by and large, most of the ensemble doesn’t amount to much at all. The frenetic action alternates between fun and irritating, and the ability to enjoy The Suicide Squad rests heavily on how much you like meanspirited, over-the-top and ultraviolet comedy where a gory death is usually played for laughs. There are times when it’s irreverently entertaining, but by the time the opening sequence was over, I was already finding it a bit tedious.

The Suicide Squad is filled with impressive visuals and has a strong sense of style. When the comedy is working, it’s not half bad, though most of my favorite moments were given away in the trailers. Although, I do suspect it would play better on a second viewing with lowered expectations. The absurdly high Tomatometer rating is in no small part because it succeeds at what it sets out to do better than its predecessor, and many critics are just giving it a “good enough” pass as opposed to saying it’s really great. Some of it comes down to personal taste and even mood, and there’s definitely a crowd that will embrace this one with plenty of blood-soaked enthusiasm. –Patrick Gibbs