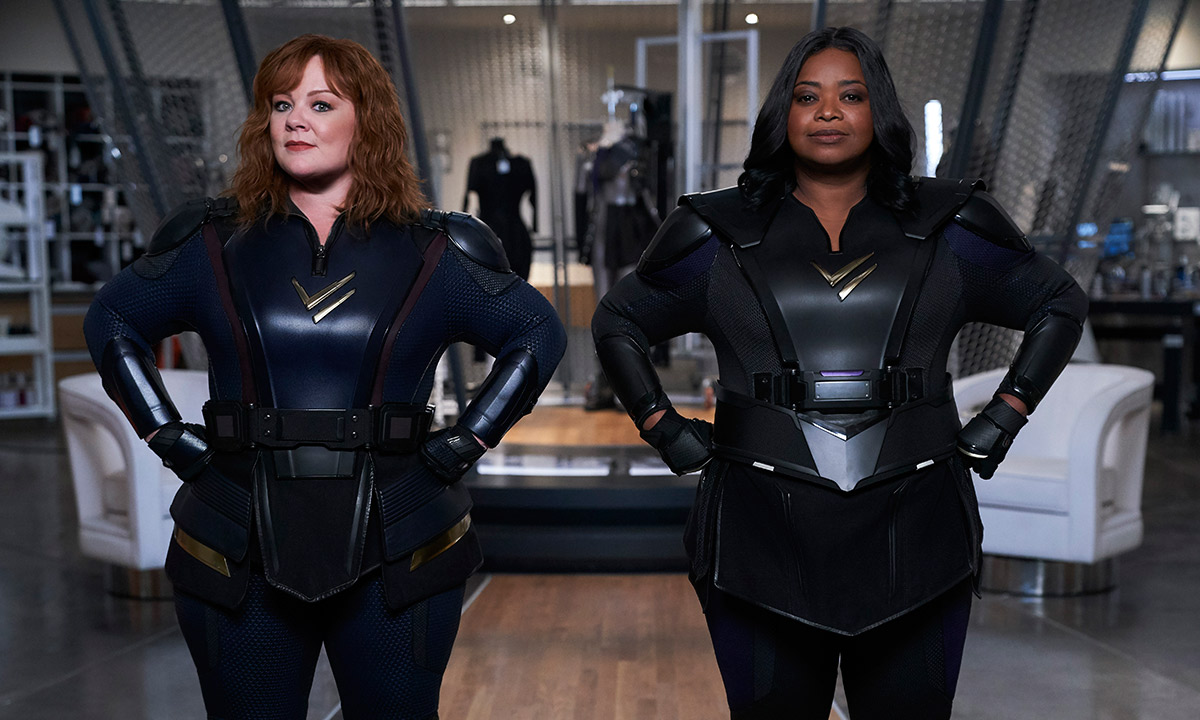 Photo courtesy of On The Day Productions

On The Day Productions
Streaming on Netflix: 04.09

I’ve mentioned before that despite any popular ideas out there that critics like to hate movies and go into many eager to do so, it just doesn’t add up. While I will not deny that a bad review can sometimes be fun to write, I watch about 15–20 hours of media per week: You’d better believe I go into every bit of it hoping to enjoy it. But while the time and effort put into being a critic greatly dulls, if not destroys, the ability to say, “I’m looking forward to hating that,” there’s no denying that there are certain things we dread having to review, and anything made by Ben Falcone, the writer-director of the new Netflix superhero “comedy” Thunder Force, is high on that list. One of the reasons why is that it invariably means another incredible waste of his talented wife, Melissa McCarthy, a terrific actress who has starred in more bad films than good ones. At least in part, she has her husband to blame for it.

Thunder Force takes place in a world terrorized by supervillains known as Miscreants. Or at least in a city—it’s never really clear whether they exist outside of the city where the main characters live; you know how it is in superhero films. Emily and Lydia have been best friends since middle school, where Emily was the nerd and Lydia the tough tomboy who kept Emily from getting bullied, but a falling out between causes decades to go by without them seeing each other. When their school reunion rolls around, Lydia (McCarthy), who is working as a forklift operator, decides that it’s time to reconnect with her old chum, who has grown up to be a scientist and millionaire, played by the great Octavia Spencer.

When Lydia goes to visit Emily at her corporate headquarters/super science laboratory, an accident occurs. It seems that Emily has been working on creating two formulas to turn a regular human being into a superhero in order to fight the Miscreants, and Lydia ends up getting shot up with the first dose of one, forcing them to follow it through. While the super strength goes to Lydia, Emily takes the treatments for invisibility, and the two women must become the first superhero team. Now, it is up to Thunder Force to battle the super-powered Miscreants and save Chicago from the clutches of The King (Bobby Cannavale).

I love Spencer in anything, and as an obsessive Gilmore Girls fan who has seen enough of McCarthy’s rare gems to know her incredible potential, I went into this one wanting to like it despite the warning signs. A superhero movie starring these talented actresses could be a great thing, but—surprise, surprise—Falcone goes for the cheap joke every time, and they aren’t even funny cheap jokes. Two great actresses are wasted in a film that’s genuinely difficult to sit through—I couldn’t get through it one sitting—with the only moments that come close to being mildly amusing being provided by McCarthy’s friend, Jason Bateman (Arrested Development, Ozark) in a supporting role and The King’s head henchman, The Crab.

I’m sick to death of watching McCarthy play a female Chris Farley, and I have to wonder if she’d really be content doing it so often if it wasn’t furthering Falcone’s career. I don’t mean to beat this point into the ground, but not since Tom Arnold have we seen such a talentless hack ride the coattails of his wife’s success into a position of power in Hollywood. The sluggish pacing allows the cheapest of bits to go on forever—a sequence where McCarthy is doing an impression of Steve Urkel is just an ordeal—and Falcone doesn’t have the sense of style to pull off superhero action or to give the movie any kind of visual flair.

Thunder Force will be just successful enough among the least discriminating comedy fans looking for a distraction that it will probably just encourage more third-rate garbage from Falcone and McCarthy, but nobody is going to love it. One can only hope that she gets to work another Can You Ever Forgive Me? or at least a St. Vincent between these crass, stupid, degrading cookie-cutter projects, and maybe even (fingers crossed) Gilmore Girls: A Year in the Life. Because she deserves better, and so do we. –Patrick Gibbs