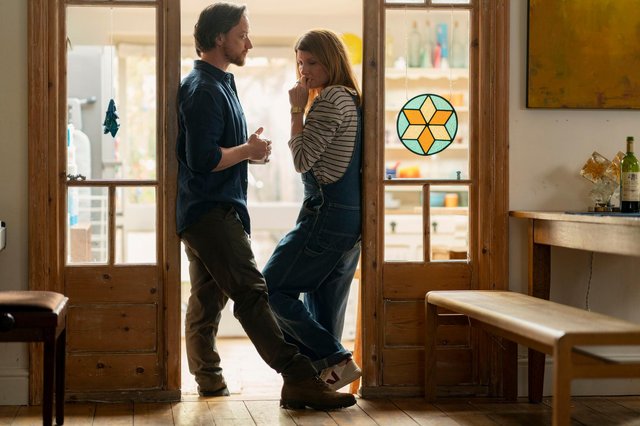 It was with a degree of trepidation that I went into Together. It’s a relationship dramedy about surviving the pandemic. It’s an iffy proposition to make a movie about COVID-19 because not many people want to watch a drama on the subject that gets too heavy, but going too light is even worse.

In Together, James McAvoy (Atonement, X-Men: First Class) and Sharon Horgan (Military Wives, This Way Up) play an unhappy couple living together in the UK just as the pandemic hits. They have been on the verge of going their separate ways when the lockdown makes it impossible. The characters are never given names, identified in the credits only as “He” and “She,” though we do get to know the name of their son, Artie (Samuel Logan).

The movie isn’t about Artie, however; it’s about them. He is a cynical, angry conservative businessman, and She is a bleeding-heart liberal who works with refugees. The spark that they once felt for each other is, at best, merely an ember at this point. But they are forced to make the best of the situation Together, as the whirlwind experience of 2020–21 has a profound effect on them both—and on their relationship with each other.

Director Stephen Daldry (Billy Elliot, The Hours, The Reader) takes a minimalist approach to this intimate story, favoring long takes and letting the actors and the script by Dennis Kelly (Utopia) do the heavy lifting. Daldry does a laudable job of taking what is written like a two-person play and making it feel more like a movie than it could have done. Thankfully, his COVID movie is much more successful than his laughably manipulative 9/11 movie, Extremely Loud & Incredibly Close.

McAvoy and Horgan break the fourth wall to the point where they smash it down completely, with the characters speaking directly to the camera throughout, in monologues and in dialogue. It’s an approach that could have easily fallen completely flat. But the script is funny, heartbreaking and searingly insightful, bolstered by spectacular performances. I’ve been a McAvoy fan for a very long time, but it’s been a while since he’s done a film that really did anything for me.

In Together, McAvoy gives a mesmerizing performance that is a masterclass in “in the moment” acting. Quite frankly, while it won’t get half the attention that his showy roles in Split and Glass did, anyone who doesn’t see that his work here is superior has a pretty superficial understanding of acting. There’s a truth and vulnerability to this performance that blew me away, and Horgan is every bit as good.

Together has some hilarious comic moments, but it also has some serious depth, covers some harsh realities of this point in time that we haven’t seen on film before/much, and some pointed and even angry criticism of how the British government has handled things. By the time the film was over, I felt a lot of love for both of the lead characters. That being said, the biggest flaw is also the element that demonstrates the level on which Together would have worked better onstage. That is, Artie is seen but never heard, merely a presence in the background.

The lack of interaction with him bothered me. If Together had been a play, Artie would have only been referenced, and the fact that he’s always off playing by himself wouldn’t have left me with any feeling that he wasn’t given enough attention. On film, however, it was constantly on the verge of alienating me with that feeling.

Together is an imperfect film that isn’t going to work for all audiences, but it’s a compelling and sincere effort that I found to be both upsetting and cathartic. It’s a performance piece that caught me by surprise and moved me a great deal. While it won’t find an audience in theaters, it will be all the more powerful on video during the inevitable near lockdown that is headed our way if we can’t start working Together to end this nightmare. –Patrick Gibbs