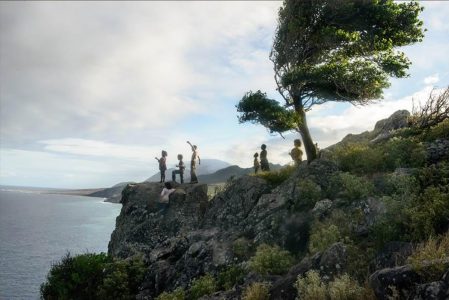 If you’re anywhere near as fond of J.M. Barrie’s Peter Pan as I am, you are likely curious about Wendy, the new reimagining from director Benh Zeitlin (Beasts of the Southern Wild) and whether you will enjoy this variation. As a fan I will say that you really need to go into this one without the expectation that you’re going to be seeing something warm and fuzzy like Hook. That being said, you’re also not going to be stuck seeing an insipid and dumbfounding travesty like Pan.

The story begins in a small, unnamed town at Darling’s Diner next to the railroad tracks. The titular character (Devin France) dutifully helps out her mother at the greasy spoon along with her twin brothers James and Douglas. But they all dream of something grander than this quiet, meager existence. One night, when Wendy spies a strange boy running atop a moving train, she and her brothers follow him, and they hop aboard the locomotive themselves. The boy, Peter (Yashua Mack) is a mysterious figure who proclaims he will never grow up. Peter takes the three siblings to a volcanic island, where there are more feral children who follow his leadership. But the island is full of secrets, and it is as unsettling as it is beautiful. The children revel in their wild behavior, but there are some very rude awakenings in store.

There are moments when Wendy almost feels like Peter Pan by way of Lord of the Flies, and this is where the film is likely to try the patience of some audience members and critics. But I found it to be engaging to the point of being utterly transfixing. The story goes to some unexpected places—it’s very heavy and at times so surreal that you may begin to feel like a lost child yourself. But it all comes together into something lyrical and poignant, with a statement to make on the strange conundrum of spending our childhood wanting to be adults, only to grow and realize that all we want is to be a child again. It’s a beautiful, devastating and profound experience, and I ended up strongly connecting with it on a very personal and emotional level.

The children’s performances are strong, and France has genuine star potential. The bare technical simplicity of it all is enchanting in its own way, and Dan Romer‘s score is a knockout. Wendy is unlikely to be embraced by mainstream audiences. It’s too intense and upsetting for younger viewers, and Zeitlin’s take on the material is definitely not for all tastes. Unlike Pan, though, it’s an inspired and deeply heartfelt artistic vision, and it is one I will likely find myself championing for years to come. Wendy is a multi-layered, visionary film that may very well haunt me forever. –Patrick Gibbs