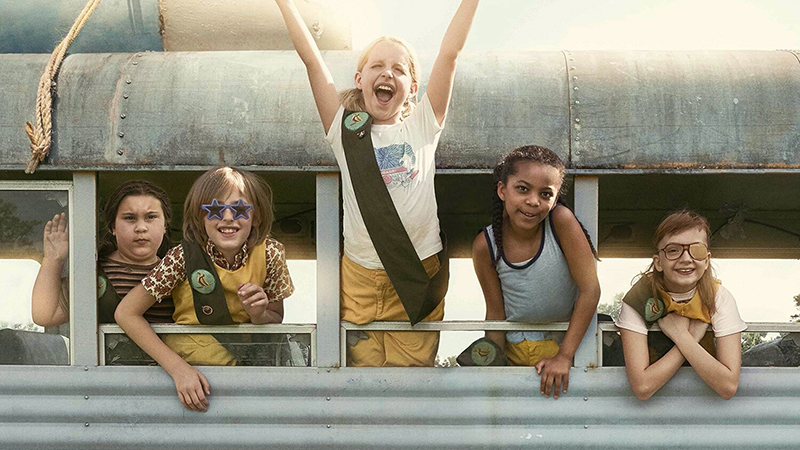 There are two schools of thought when it comes to formula filmmaking. One is that it’s called “formula” for a reason, and that you can’t go wrong if you have all of the right ingredients. The other is that you can never create anything truly special starting from a set recipe. I happen to disagree with both of these points of view.

Troop Zero tells the story of Christmas Flint (McKenna Grace), a socially awkward little girl in a small Georgia town in 1977. Ever since the girl’s mother passed away, it’s just been Christmas and her Daddy (Jim Gaffigan), a small-time lawyer who is simply known to all as “The Boss Man,” and is part Atticus Finch, part Andy Taylor and and part dopey-long-eared-basset-hound in a Disney film. Christmas is ostracized by the local children for supposedly being a bedwetter, and her only real friends are Joseph (Charlie Shotwell), a 10-year old boy who is more comfortably and overtly feminine that she is, and The Boss Man’s tenacious assistant, Rayleen (Viola Davis).

Christmas looks to the stars for her departed mother, and then learns one day that the “Birdie Scouts” are having a statewide talent competition to win the opportunity to record and submit a message for a record being sent into space—she knows that she has to win. The only problem is that local chapter, Troop 5, won’t let her join. She then concocts a plan to start her own troop. Naturally, it is made up of oddballs and problem children, including Joseph. Christmas enlists Rayleen as Troop Mama, and together this rag tag group of misfits just might have what it takes to win.

This is the kind of formula film that succeeds by throwing in enough unexpected ingredients and by preparing it in its own unique way, and it may be my favorite since School of Rock. Grace and Davis command the screen with great expertise, and Charlie Shotwell’s portrayal of young Joseph is so effective, and so free of cheap laugh gimmickry, that it should make him a star. Milan Ray is also a standout as “Hell No,” a tough as nails African-American girl who uses bullying as a defense mechanism, as is the great Allison Janney as the hard nosed Mama of Troop Five.

Lucy Alibar (Beasts of the Southern Wild) has written a winning script, and directors Bert & Bertie approach with a style not unlike a Coen Brothers comedy. This is the kind of film that has no shortage of people making a strong impression behind and in front of the camera. While it may be a bit predictable and tends to echo a lot of other films of the genre, it’s so heartfelt and so secure in its own identity that I can’t bring myself to hold much against it. It literally lifted me up out of a dismal mood and put some bounce in my step and a song (specifically, “Space Oddity” by David Bowie) in my heart. And if that isn’t a recommendation for a feel good movie, I don’t know what is. –Patrick Gibbs