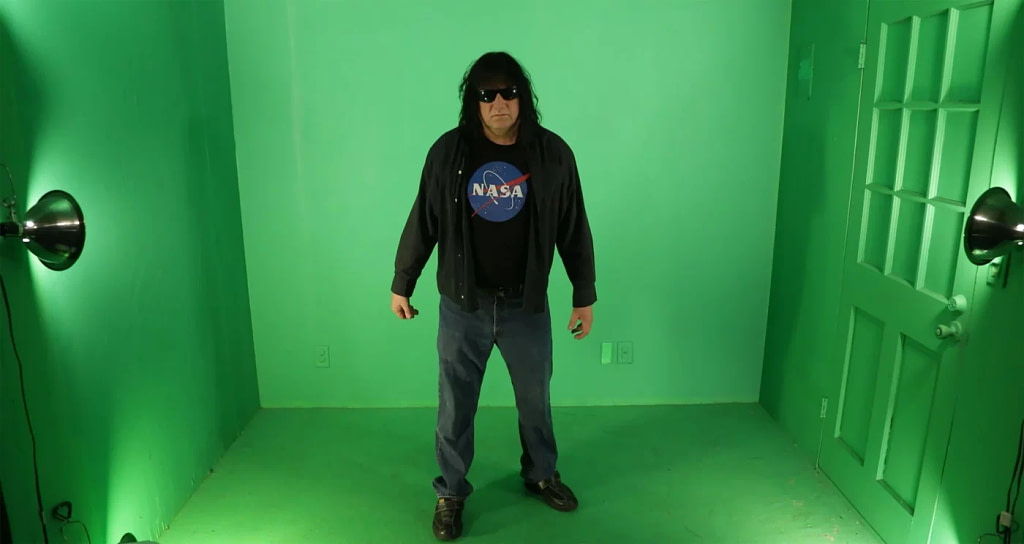 Down the Rabbit Hole with Space Happy Director Louis Crisitello

Louis Crisitello’s debut documentary, Space Happy: Phil Thomas Katt and The Uncharted Zone, is a modest, charming story about Pensacola, Florida’s own Phil Thomas Katt and his impressive career creating music, music videos and hilarious podcasts that showcases various artists across the area and country. Crisitello was first fascinated by Katt (PTK for short) about 10 years ago when he was surfing the web and found PTK’s unconventional videos on YouTube. “What fascinated me was that they all seemed like they were from a very specific time, a specific era,” says Crisitello. “His style never changed. I marveled at that—that he was able to keep this aesthetic going as long as he did.”

As Crisitello puts it, PTK and his musical fellows make authentic art that is “so bad it’s good.” Seems offensive, but in actuality, it is this appeal that draws many musicians to PTK’s outlandish mind like Mark Gormley, Rusty McHugh, and Russ Maines. “I, myself, like stuff like that. If anything, what Phil has done is very admirable. His persistence of what he’s done doesn’t care about Hollywood or using the best cameras,” Crisitello says. “He just went out there, and he’s done it despite any feedback he’s gotten or people judging the quality. It’s been his career for over 30 years, and the desire for a Phil Thomas Katt video has only increased.”

“His style never changed. I marveled at that—that he was able to keep this aesthetic going as long as he did.”

Crisitello not only admires PTK’s bizarre videos, but he truly views PTK as a visionary and mentor, the artist having helped Crisitello shape his own record label, Perpetual Doom. “Perpetual Doom is very much inspired by Phil,” he says. Crisitello filmed music videos for cool, indie artists he liked listening to, but unfortunately, he couldn’t do that anymore when COVID hit, so he opted to release music for those artists via Perpetual Doom. “Our vibe is oddballs and outcasts. It’s offbeat, and in my mind, a reflection of what Phil is doing with The Uncharted Zone (Phil’s weekly television music show),” Crisitello says. “Sure, we can chuckle and laugh at the low-budget approach, but at the end of the day, I have the utmost respect for what Phil has built and what he continues to do. He’s living his own dream, and what he’s doing is pure. There’s no affect to it; it’s honest, ya know?” Not only is PTK’s work honest, but it is quite entertaining and full of raw, profound talent.

Space Happy expresses a DIY tone, as well as showcasing this so-called “unachievable fame” that lingers throughout the film. However, Crisitello believes this is the exact point of PTK and his legacy: “A major part of this story is what defines ‘success.’ Maybe [Phil is] scraping by, but that doesn’t not make him successful. The fact that people are enjoying some of the content for the wrong reasons … they’re still enjoying it. His YouTube views are high and a lot of people are watching—Is that success?” Crisitello questions.

“He’s living his own dream, and what he’s doing is pure.”

Above all, Phil Thomas Katt is always true to his notoriously obscure style of green screens and 2D randomness, like having a backdrop of the Great Pyramid of Giza while singing about deep, sad heartbreak. “I like for viewers to see Phil as an inspiration. He embraces his constraints and allows those limitations to guide him creatively. If people watch the film and enjoy it, I hope they go down the rabbit hole of The Uncharted Zone and watch these artists, respecting what they do,” says Crisitello. He himself hopes to be true to the stories he wants to tell.

You can watch Space Happy: Phil Thomas Katt and The Uncharted Zone at this year’s Slamdance Film Festival, which runs from January 20–29!