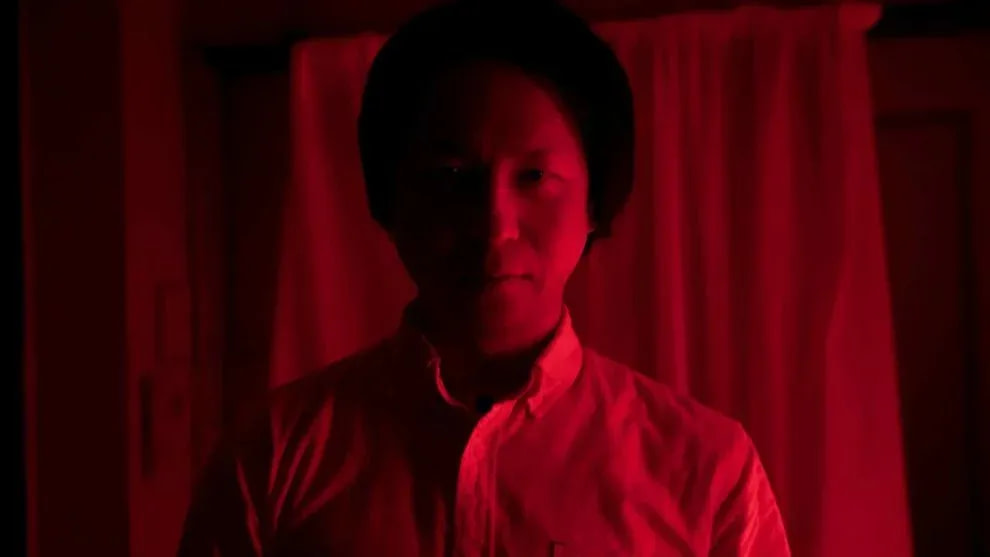 For us, 24 hours is a day; it’s nothing. For smaller creatures, our day-to-day is an eternity. For the mayfly, 24 hours is a lifetime. Moths have a maximum lifespan of just 10 months. To insects like these, 80+ years would be unfathomable. Having all of that time and the ability to perceive it allows us a sense of history. In Keishi Kondo’s New Religion, history is something enviable when you have so little of it.

The film follows Miyabi (Kaho Seto), a call girl still aching from the accidental death of her daughter three years prior. Miyabi begins to take the calls of a mysterious man called Oka (Satoshi Oka), but we don’t start there. The first thing viewers see after the opening credits is a jarring visual montage bathed in red. A human embryo grows, an image of a large moth appears and disappears and flashes of what might be a city are all underlined by the film’s dark, atmospheric score. Kondo’s only request at this screening was that the movie be played “as loud as possible,” and it’s clear why. Even after the initial montage is over, the low, droning score plays a huge part in unsettling the audience.

Next we see the circumstances of Miyabi’s daughter Aoi’s death: a fall from the balcony while trying to water plants. Following this, the film moves quickly, establishing Miyabi’s divorce from her ex-husband and her current relationship with her unnamed boyfriend (Saionji Ryuseigun). When her coworker Akari (Kuroe Mizuta) goes on a public murder spree and vanishes, Miyabi gets booked by Akari’s last client before her disappearance: Oka. Miyabi makes her way to his apartment and into the real meat of the story.

Kondo’s use of lighting and set design in Oka’s dark, sparse apartment would have been fine enough, but once again the creative team makes great use of the soundscape. Oka, a victim of throat cancer years before, has hooked up his vocal cords to his house’s sound system. His deep, semi-synthetic voice emanates from the walls, enveloping both Miyabi and the audience. Oka takes Miyabi upstairs to his photography studio, washed out in red lighting, where he requests a picture of her spine and each of her legs. As she continues visiting him, he takes more disembodied photos of her person. Miyabi’s supervisor, Aizawa (Daiki Nunami), is hesitant but relents to her continuing so long as her face isn’t pictured. Meanwhile, a series of bomb attacks on schools and museums are terrorizing the city, allegedly perpetrated by Akari.

The mystery of what Oka wants with these photos works a treat. It’s intriguing enough that we’re interested but not made so agonizingly interesting that we’re wishing the scenes of Miyabi and her boyfriend’s home life to end sooner. As more pictures are taken and Oka influences Miyabi’s mind more and more, she begins to believe her daughter is alive and present in her apartment.

Miyabi’s descent into madness is poignant and eerie yet strikingly soft. Maybe it’s because I’m more accustomed to something like Toni Collette’s grief-induced fall in Hereditary, full of screaming and crying, but I was really pleasantly surprised by this reserved performance.

In a key scene, Miyabi throws a birthday party for Aoi, fully believing her daughter to be present. The boyfriend leaves the house and runs into Aizawa and the former bestows the latter with sufficient foreboding and curiosity to go poke around Oka’s apartment. Tucked away in the photography studio are not just Miyabi’s polaroids but a lot of other sets as well. Each stack contains images of body parts, severed and disembodied from their owners by the photos’ frames. Then, when Aizawa’s back is turned, one of the images shifts. A grotesque, naked body stumbles out of the nook and the soundscape takes the lead once again. Wet smacks and bone crunches accompany the body’s fumbling, rigid movements as Aizawa stumbles down the staircase to his death.

In Oka’s last session with Miyabi at the film’s climax, he reveals via a slightly confusing monologue that he was enlightened by a vision of a Moth. In this vision, he and the Moth became one and set out to feed their collective hunger for history. Humans are capable of personal history and self-understanding that moths are not. How this ties into the Moth’s plot of using human-photography clones to commit acts of domestic terrorism isn’t made very clear before Oka takes his final photo of Miyabi and sentences her to an eternal dream. In her dream, Miyabi is back at the start of the film, with Aoi on the balcony. At first saving her daughter, she quickly realizes what she was missing all along: that she has to let her go. But it’s too late. Even after Miyabi chooses to let Aoi go, she’s still stuck there.

Oka uses photographs to capture these people one piece at a time, trapping them in a dream forever while a copy of their body walks the world. Photographs allow us to achieve a certain level of eternity; a life without ending. It reminds me of the conversation between a sobbing Miyabi and her boyfriend, when she realizes something’s wrong following Aoi’s failed birthday party. The boyfriend says nothing could ever replace Miyabi, that he wants to spend the rest of his life with her. But he also recognizes that there will come a day when they can’t be together anymore and things have to end: “I think if you can forget ‘forever,’ you’ll see everything,” he says.

This point about forgetting forever and accepting endings provides a counterargument to the Moth’s temptation. Oka and the Moth use photos to preserve their deconstructed subjects allowing them to live forever without grief. Through a horrific, literal portrayal, Kondo cautions us not to resist grief, or else we become trapped in a dream of what was; hollow versions of ourselves.

All of this conjecture about loss and eternity aside, New Religion is a super effective horror film with plenty of scares and spine-chilling moments to satisfactorily creep you out. –Max Bennion