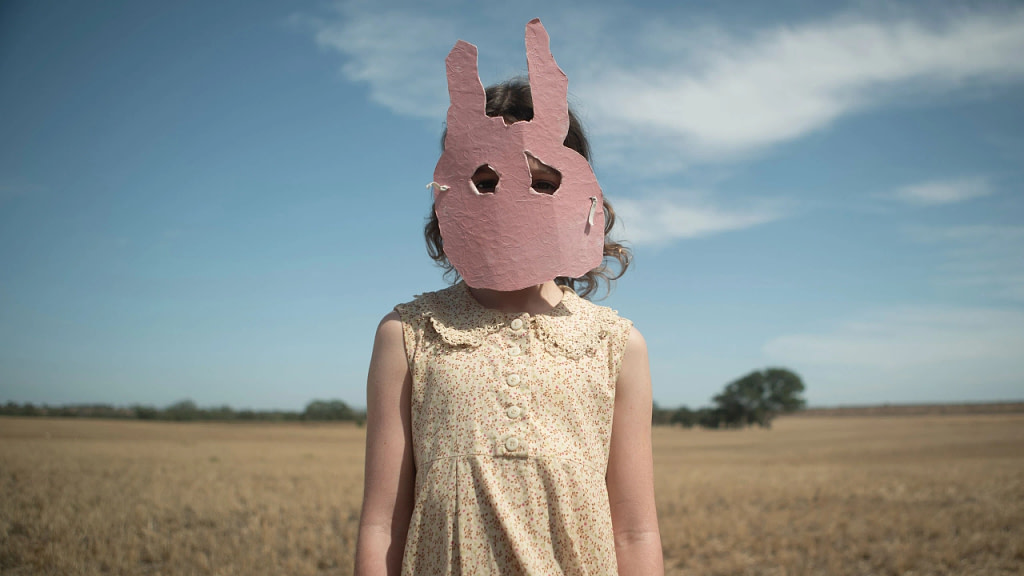 There’s nothing scarier than having children. Run Rabbit Run’s Sarah (Sarah Snook of Succession) uncovers the boundlessness of this theme as her young daughter, Mia (Lily LaTorre) begins to lose grip on reality and falls into bouts of psychosis that eerily resemble life-altering calamities from Sarah’s past. Run Rabbit Run makes literal the psychological terror of cyclic, generational trauma and manifests the underlying tension of someone carrying a burden of guilt into a new generation.

Sarah and Mia appear first as a relatively happy/normal/adjusted/etc. family before each new scene cracks off a piece of the glossy exterior and reveals the bruised and bruising portrait underneath. As Sarah unravels, so does the camera work—we shoot between close ups, massive aerial shots, shaky cam POVs and jump-cut flashbacks. We’re constantly teased and baited and picked up and dropped down in twisted, backwards positions. The film contains powerful moments of shock, where the ambiguity of Sarah’s past coheres into horrifying truths.

Run Rabbit Run’s second half moves out of its urban setting and descends into the Riverland region of South Australia, a hostile location that brings a new, tactile terror to the story of suggestion. Here, Director Daina Reid and her collaborators harness the discomfort of jagged cliffs, brush piles and uneven, rocky desert terrain. Some might balk at the movie logic required to justify Sarah bringing her clearly suffering daughter to a remote cabin in the Australian desert instead of, say, a doctor, but the beauty of the scenery and the set pieces it elicits provide fair justification for this relocation.

As you might assume, Sarah Snook accounts for some of the film’s greatest strengths. Her penchant for subtle facial acting allows the deceptive narrative to milk the chilling potential of its twists and turns. As Sarah slowly reveals her secrets and the audience starts to unravel the mystery of Run Rabbit Run, we watch her move between confusion, guilt, terror, anger, anxiety, protectiveness and remorse, all through minutely composed lip purses and eyebrow movements. Without big, exposition-heavy monologues, Snook enlivens the film’s central quandaries between truth, self-protection and maternal care.

Unfortunately, Reid and screenwriter Hannah Kent are plagued by an unnecessary, uniquely 21st-century desire to say something big and have you know it. This isn’t just a scary movie—it’s about trauma. and motherhood. and grief. and all of the other things people who earnestly use the phrase “elevated” horror think separate schlock from art. The narrative pieces of contemporary hits (The Babadook, The Sixth Sense, Hereditary) riddle Run Rabbit Run, as do the now-tired, often unsuccessful clichés brought along with this type of serious family drama–horror.

Fear is a powerful emotion, one that forms an inextricable bond with all other negative feelings—anger, sadness, the like. It also has the power to speak without words, to encompass us on the base, physical level. Right now, the collective anxiety of “that sweatshirt draped over my desk chair looks creepy when I turn the lights off” is fueling a runaway, word-of-mouth success train for a structuralist avant-garde film full of unintelligible VHS footage. The technical team behind Run Rabbit Run succeed in building an atmosphere of suspense, dread and drama; if only they didn’t get so bogged down by the self-imposed need to spell out—in overwrought, calligraphic font—what they think you should think about what this all means. –Audrey Lockie