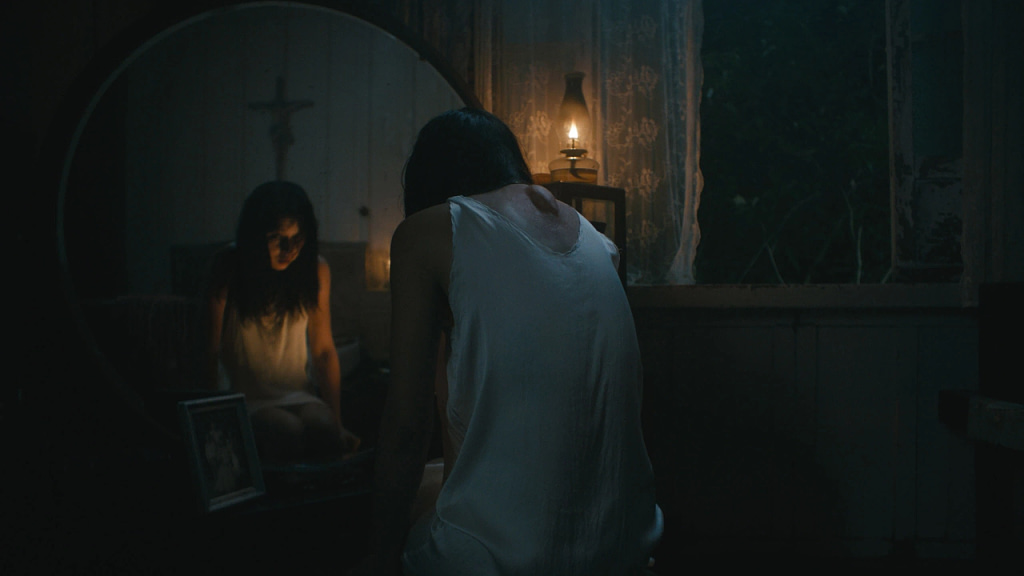 In My Mother’s Skin unfolds as a dark fairy tale—the classic narrative of a spectral, woodland creature luring an innocent child into a dark web of magic and deception. Our lead and target of this spirit, Tala (Felicity Kyle Napuli), sits at the precipice of childhood and adolescence. WWII surrounds her family home positioned in a remote forest in the Philippines. A stolen batch of Japanese gold drags her accused father away, leaving Tala, her ailing mother (Beauty Gonzalez) and her brother (James Mavie Estrella) to fend for themselves with a diminishing food supply and the looming threat of violence.

Tala ventures out to the woods to search for resources and encounters a woodland fairy. This spirit stands in shimmering robes and jewelry, offering Tala a balm for her family in the form of food and medicine. More than just tactile gifts, the emotional lure the wood fairy provides—one of choice, freedom and adulthood—guides Tala into her arms. At home, Tala’s mother frequently tries to placate her with outright lies, asking her to ignore the problems laid bare before her. The fairy spirit sees Tala struggle and offers her the opportunity to be heard, to be taken seriously as a sentient, cognizant individual. “You’re a woman now,” she tells Tala when the young girl takes a batch of delights back home.

As the fairy’s magic inevitably sours and turns Tala’s mother into a cannibalistic monster, the grounded, wartime drama explodes into a supernatural fable and the visual tone abandons the muted palette of the opening scenes in favor of a color-tinted, CGI-heavy atmosphere reminiscent of early 2000s-horror. The film’s effects are a little choppy and cartoony, most evident in the digital glow around the evil spirit and the facial features of Tala’s mother in her animalistic state. Increasingly, the grit of the chamber drama melts into something more exaggerated, almost campy.

In My Mother’s Skin builds its emotional core by juxtaposing this mythic violence with the threats and consequences of a base, physical war. Next to the mother-creature’s foot-long tongue is the stark image of Tala’s brother shakily pointing a gun at the goon sent to recover the stolen gold. In one of the closing scenes, Tala’s father returns to find his son’s severed head plopped on their foyer. His reaction jolts us out of the supernatural horror we’ve become accustomed to and reminds us of the very real circumstances that surround the fairy tale; any gruesome glee gives way to bleak, blunt force.

The effect isn’t that of complete synchronicity between these contrasting lenses, with Dagatan resisting the urge to frame the entire fantasy plot as a mirrored allegory for the war. Instead, the two settings live in constant and mutually informed dialogue, and Tala stands at the precipice of the film’s sparring tones. In the scenes where she first meets the spirit, her sense of naïve wonder speaks volumes. Here, against the gray/brown/green hue of her home, is a glowing reassurance that registers to her like a baby drawn to silver. As she watches her brother die in the film’s final act, her screams bear weight and crack with experience. There’s a depth to her shrieks that sounds years beyond the fascinated, youthful hope she possessed not 45 minutes prior.

Subjectivity is key here. The contrasts between the conflicts we see in In My Mother’s Skin stem from Dagatan’s ability to situate the character dilemmas within a wider sphere of influence. When we watch the up-to-that-point sidelined maid character, Amor (Angela Bayani), suddenly take a leading role in a side plot involving the stolen gold and political conspiracy, a class dynamic wrenches itself into the plot. Passing references to Japanese and American forces situate us in the colonial effects that the war had on the Philippines as a nature and culture at large. None of these contextual layers fade, instead stacking them into a Jenga tower that eventually tumbles into the nihilistic and inevitable conclusion of each—the almost black-comic nature of Amor’s exit, the unspoken religious subtext, the metaphors of “growing up.” Like the fairy spirit, In My Mother’s Skin lures you in. It promises and delivers plenty of well-executed gore, but subtly, inconspicuously weaves in something darker, something more disturbed. –Audrey Lockie