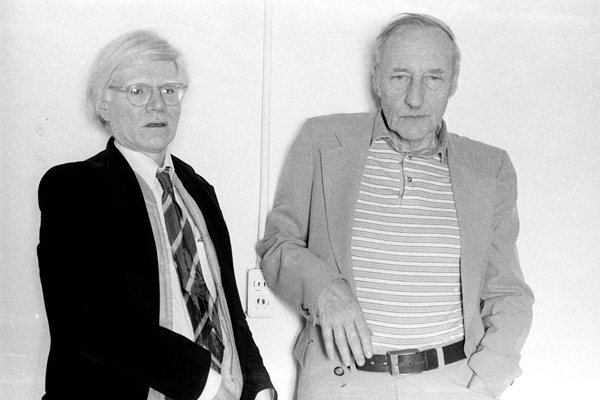 A Man Within is the upcoming documentary about the life of famous writer, artist and icon William S. Burroughs, the first made since his passing in 1997. The film, which will have its world premiere at Slamdance 2010, aims to get beneath the character of the legendary man who has had an undeniable influence on countless artists from those associated with the Beat era to modern day writers, artists and musicians.

Burroughs died at the age of 83 in August of 1997 from complications after a heart attack (amazingly only four months after lifelong friend Allen Ginsberg passed away) and was buried in the same place as his birth, St. Louis.

The film’s maker, Yony Leyser, depicts how Burroughs had struggled as a person and A Man Within explores that issue, scratching away the tough surface that Burroughs projected, sometimes leaving a stark and naked portrayal of the legend.

“In his life, he was viewed as this monster in society: he killed his wife, he’s cold and sadistic, he’s a junkie, he shunned his son,” Leyser says of Burroughs. But Leyser dug deeper than the myths and the general conception of Burroughs, examining instead the tenderness and the man beneath the public persona.

Leyser, who is also a writer and photographer, began making documentaries and films when he was 16, his first being  Anna & Bill, a love story involving a drug-addicted prostitute. That being said, it goes hand in hand that Leyser was the correct man to tackle the task of making a posthumous documentary about Burroughs.

Leyser moved to Lawrence, KS (the same town where Burroughs lived in his later years), after being kicked out of art school. He first came across the works of Burroughs from a friend and read Naked Lunch on the beaches of Lake Michigan. “In high school, when I read Naked Lunch, I couldn’t believe that something like that had been written and that it was still so relevant. I chose to do [Burroughs]because while Ginsberg and Jack Kerouac were very fascinating, I feel as if I kind of outgrew my interest in them as I became older,” says Leyser of why he chose Burroughs over other Beat-era writers and artists. “Burroughs was also a lot more versatile, he did a lot of collaboration with people and influenced a lot of the culture I really respect. I think his work will definitely stand the test of time.”

Leyser began working on A Man Within by interviewing and speaking to around thirty of Burroughs’ friends and those loosely connected to him, gradually working his way up the pyramid. He sort of fell into it, and after interviewing Patricia Marvin, a woman who owned a salvage yard and helped in taking care of Burroughs during his later years, he was invited to accompany her to upstate New York to visit Charles Plymell, who suggested he interview some old friends of Burroughs, Sonic Youth (members of whom are working on a soundtrack for the film, although Leyser was not at liberty to discuss any details).

Featuring never before seen footage and photographs of Burroughs, Leyser interviews some of his rather prolific friends and artists, amongst them being Patti Smith (which includes
footage of her playing guitar and singing for him–she also contributed music), Iggy Pop, directors Gus Van Sant and David Cronenberg, Grant Hart, Jello Biafra, Genesis P-Orridge and fellow Beatniks Diane Di Prima and Amiri Baraka. He shows us how those who were close to Burroughs viewed him—the person underneath the junky, the outlaw and the hardman.

“People really wanted to get this film made and they saw that I was an eager and young person. It was shocking that they had so much faith in me,” says Leyser, who has also recently shown some of his photographs in an exhibit called Daily Life Sucks, in which he captures punks, anarchists, transgendered and so-called “other outsiders” going about their lives.

Leyser’s work as a photographer is as important to him as his film work and it all ties together. “People outside of what is called the ‘mainstream’ have always interested me.” He has plans to publish a photobook and fictionalized memoir based on his travels to places such as Freetown Christiana, an anarchist village in Copenhagen and IDA, a communal farm in Tennessee made up of different types of people, including the homosexual and transgendered. “Christiana is full of people who have just completely dropped out of society and there are thousands of them there, people dropping out of a basically capitalist culture, and while William [Burroughs] was definitely not a dropout, he was an outsider and I wanted to push the envelope that he was an outsider who came into the overground, underground and middleground consciousness and became very famous,” he says. “I don’t know if ‘outsider’ is the correct term,” he continues, “Because maybe to people in Christiana and IDA it’s the businessmen, the capitalists, the people who don’t care about anything else and work at corporations. You know, maybe the way life should be lived is the way they are. I think if you’re looking at minorities and majorities, these people are a minority, but to me they are definitely living a more interesting life.”

Leyser’s outlook on “outsider culture” definitely provides us insight into Burroughs and perhaps why Leyser has gone about the task of documenting his life so admirably and tastefully. “I think what’s important is [Burroughs’] sharp accuracy at pin-pointing the hypocrisy of society and the American mainstream that we were stuck in when he wrote, and in a way we’re  till stuck in it now,” he says.

Burroughs, born to a fortuitous family in Missouri, left home at the age of 18 to pursue an education at Harvard University and, while there, made many trips to Harlem and Greenwich Village where he began to explore the underground world of homosexuality and drugs. Years afterwards, Burroughs bounced around Europe, making friends with the queer and outsiders before returning to America. He quickly became known as an eccentric, even moreso after dismembering his own pinky in what has been described as a fit of jealous rage, although Burroughs told a psychiatrist it was “an initiation ceremony into the Crow Indian Tribe.”

Burroughs moved to New York  City with Lucian Carr and lived with Kerouac as both began their fledgling writing careers. It was also here that he became addicted to opiates, which would play a major controlling role for nearly the rest of his life and inspire such works as the book Junky, his first published book (originally released as Junkie under the pseudonym William Lee before switching it over to his own name), which detailed his time as a pusher in Greenwich Village and his addiction to drugs.

Throughout his life, Burroughs was known for his often infamous exploits, such as planning to rob an armored bank car to prove his manhood and his quest to find the entheogenic plant Yage (which is detailed in his letters to Ginsberg, later published as The Yage Letters). Among these is the William Tell incident in Mexico, where he shot his wife, Joan Vollmer, in the head and spent two weeks in a Mexico City jail before being released. If not for this tragic event, Burroughs said, he would have never been able to become a writer.

The film places specific focus on Burroughs’ relationship with the world around him and his seemingly cold demeanor, including his relationship with his son, William Burroughs, Jr., author of Speed and a man often described as “the last Beatnik.” Oftentimes a heavy documentary, it does contain some light-hearted footage of Burroughs painting with a toilet plunger and running about in his old age, wielding a shotgun and shouting, “I wanna shoot something!”

When Burroughs moved from the Bowery in New York City to Lawrence, KS, he quickly became an attraction in the town, with traveling bands often making stops on their tours to meet and speak with him. He performed at The Bottleneck and organized the River City Reunion. At the reunion he was joined by Dr. Timothy Leary. Burroughs lived there with writer, editor and long-time friend James Grauerholz, who throughout the last portion of his life assisted Burroughs and cared for him, as well as taking the reins by helping Burroughs organize reading tours. Burroughs later adopted Grauerholz, who still lives in the house.

A Man Within, a sobering documentary, offers a fair and honest look into Burroughs’ life and shows him to be a much greater social being than his works would have you believe. A significant point in the documentary is Burroughs’ last journal entry, which shows that in the end Burroughs, a man who seemed incapable of entering a relationship and most likely the saboteur of such personal unions, did indeed absolve to love in the end.

The documentary is a mandatory viewing for anyone interested in social change, the arts, the Beat era and literature in general. It captures Burroughs and portrays him as he was: a remarkable man, an agent of change, an original soul and one of the most important and influential artists in modern culture. Burroughs’ legacy and influence continues to live on, as shown here in Leyser’s respectful homage to the man. A Man Within premiered at Slamdance 2010 on Jan. 22 at 5:30 PM and again on Jan. 27 at 7:30 PM