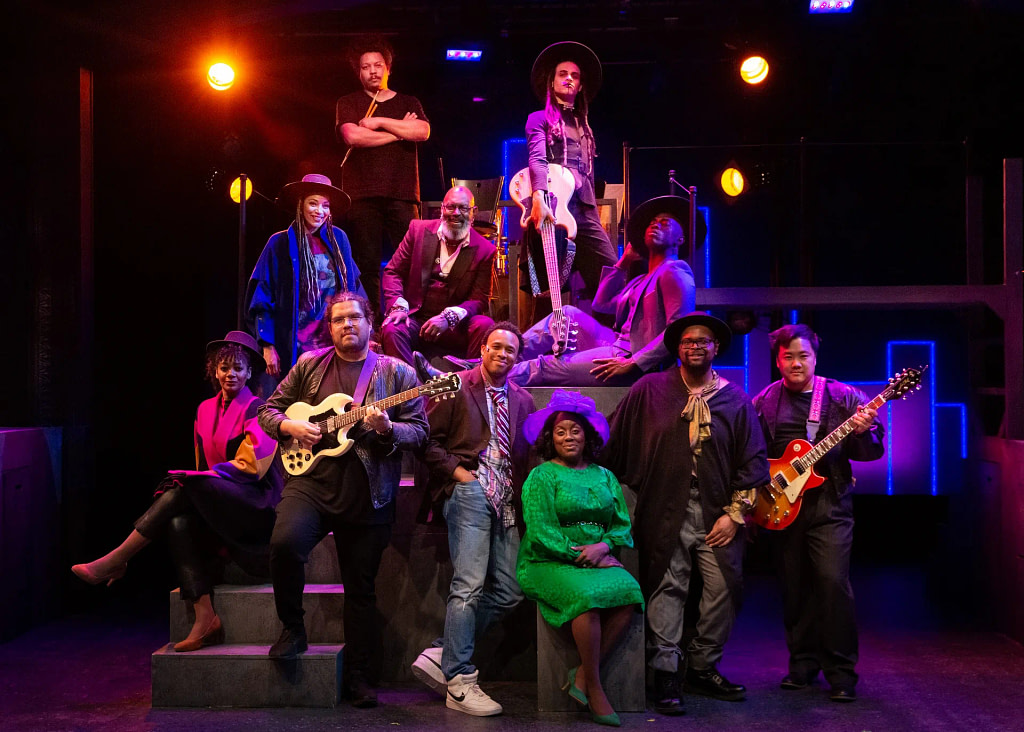 The musical score and lighting of Passing Strange create a visceral push-and-pull between wanting to be included and needing to separate. Photo Courtesy of Salt Lake Acting Company

Lighting the Flame of Your Own Baptismal Fire: Passing Strange at SLAC

The rock musical Passing Strange, presented by Salt Lake Acting Company, invites viewers to step into the late ’70s in South Central Los Angeles. An entirely BIPOC cast and band skillfully take viewers on their own journey through self-discovery while empathizing with the experience of young adulthood. The protagonist, Stew, referred to as “the Youth,” walks the line so many young adults do—should you strive to be accepted by your hometown and their expectations or jump head first into the rebel teenage trope. The impactful musical score and analogous lighting design create a visceral push-and-pull between the young-adult experiences of wanting to be included and needing to separate.

“After being developed at the Sundance Institute for 18 years and winning a Tony, Passing Strange premiered in Utah as a theatrical genre entirely its own.”

The rock musical score, laced with spiritual hymns and blues, interjects between dialogue or carrying the monologues altogether. The two are woven to propel the narrative forward while differentiating between the pressure Stew feels to conform, and the freeing musical composition and lifestyle he’s looking for. Stew even takes the music into his own hands, exploring the pop genre of love songs, and the influence of rock shows up time and time again. Stew also proves how malleable his beliefs can be at this age: dependent on time, place, the influence of love and artistic passion.

After leaving the only community he’s ever known—a tightly-knit, conservative Baptist circle—he travels to Amsterdam. “When your heartbeat has no home, it finds its way directly to the most beautiful part of your soul,” Stew says. It is there that he finds a “radical sanctuary” of liberals, non-monagamy and spiritually-free Dutch friends whose dirtiest secret is “not believing in God.” Disbelief dissolves into utter submission to this new way of life. The set’s backdrop ignites in bright yellow light, revealing Stew’s revelatory shift from what he’s known to who he is surely becoming. This shift, however, creates an indelible divide in the relationship he took most for granted growing up: that with his mother.

“The impactful musical score and analogous lighting design create a visceral push-and-pull between the young-adult experiences of wanting to be included and needing to separate.”

SLAC’s rock musical production is groundbreaking for myriad reasons; all of which caused the crowd to erupt in standing applause after one of the first showings. After being developed at the Sundance Institute for 18 years and winning a Tony, Passing Strange premiered in Utah as a theatrical genre entirely its own. Viewers are encouraged to step away from the two-hour production reflecting on the riot in themselves and finding the space to conceptualize life’s purpose as something truly revolutionary.

Passing Strange runs until May 15t, with tickets on sale at saltlakeactingcompany.org or in-person at 168 W 500 N, Salt Lake City, UT 84103.