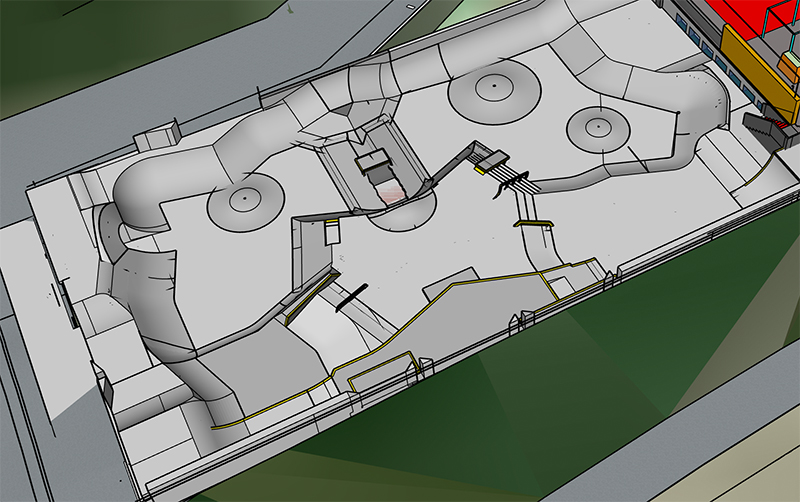 Yeah, Utah’s pretty cool. License plates tell you that we have the greatest snow on earth, most people will tell you that they love living here, and anyone who doesn’t live here usually has something nice to say about their stay in the Beehive State. Lesser known to those living outside of the action sports world is that Camp Woodward (a summer camp for skateboarding, skiing, snowboarding, mountain biking, BMX, parkour, scooter, cheer and digital media) is about to open one of their world-class recreational facilities in Park City. My friends, that day will soon be upon us on Dec. 14 at Parley’s Summit, and Santigold (as the headlining act opening day) will be christening the mothership—Park City is about to become Woodward’s flagship resort!

Camp Woodward is the Tesla of a space-age conglomerate that hosts international resorts based around every action sport that wants to push gravity to its limits. We’re talking about people who literally reshaped a mountain face over the course of one summer, and are building an eco-friendly, world-class action sports compound on top of it before winter 2019–20 hits. If that’s not enough, Red Bull named Camp Woodward Designer and Builder Nate Wessel the best skate-ramp builder ever. Woodward has also contracted Snow Park Tech (SPT) (they build everything snow-cool at the Olympics), CFO Skate Parks and Alpine Bike Parks to create a space that will be used both by professional athletes as much as anybody else who wants to get better within their respective sport. This will be Woodward’s first year-round action sports resort completely open to the public, and as Wessel says, “This place is meant to be for everyone at all skill levels.”

The Woodward indoor compound, currently finishing construction, will include every sort of action sports feature imaginable for skate and BMX (complete with foam pits and air bags), an area for gymnasts/ parkour traceurs and a multimedia area for those wanting to learn how to film it all. If all of these sports weren’t hard enough, Woodward is also throwing in an alcohol permit in addition to the cafeteria and cafe overlooking the indoor complex to watch stuff happen from a bird’s-nest view.

Going outside is entirely the same animal. Moving out to the pavilion is the skateboarder’s equivalent to what Mountain Dell course is to golfers, and it conveniently overlooks the outdoor arena. SPT outdid themselves building a regulation-size training halfpipe between a tiny ski run and then adding two lines for jump and slopestyle runs next to it. Next to that is a rope-tow rail garden, for once riders get tired of riding the chairlift. There’s a BMX jump course and a mountain biking trail being installed next to all of this cowabunga. Fear not; they rebuilt the tubing hill that was at this location before and want the community to enjoy the space as much as everyone else is sure to do.

It’d sound like this kind of infrastructure would be intrusive to mountain land’s happily populated plant environments. These are all things that Director of Programming, Phoebe Mills, and her team have been blueprinting over the past six years in preparation to break ground. From being a 1988 Olympic bronze-medal gymnast, to judging slopestyle and halfpipe at Sochi in 2014 and on to Woodward management, Mills doesn’t joke about her passions and the earth is rewarded for that. Woodward’s environment and sustainability efforts are boasting as much solar power that they can effectively use, onsite composting, eliminating the use of plastics, sawdust roofing, e-car charging and keeping building materials onsite. That last part is big because it translates to none of the mountain actually having left the mountain. Specifically, we’re talking about dirt—every piece of land that has been reshaped was in turn used to build more of the Woodward resort. This is huge from an excavation perspective and makes everyone feel at ease that this land has been put into thoughtful hands.

All About the People

Reinforcing Wessel’s mantra from before: This place is about community and sustainability and everyone is invited to partake. Our action sports economic climate over the past decade has seen similarly styled industry struts become defunct. Windells/High Cascade have merged, Camp of Champions died and Transworld Snow is a thing of the past. Camp Woodward doesn’t seem to have that problem—after Woodward Park City, these guys will be sitting happily on six permanent settlements between the United States and Mexico. This is not counting the pop-up events that Woodward provides, and Park City is set to be their largest venue yet and their first resort entirely open to the public.

While pricing is still being negotiated, a monthly all-access pass will currently run $100 per month, with day passes, day camps, clinics, rentals and family tubing also soon to be available for purchase. For those looking for the most recent updates, check out worldofwoodward.com and @woodwardparkcity on Instagram. Wessel also made a point to remind everyone that there is a huge team getting this spaceship ready to fly, so we leave you with a special thanks to Ron Kilmer, Anthony Napolitan, Stacy Sherr, John Povah, Patrick Laughlin, Craig Billingsley, Brent Hile, Tommy Ries and Justin Toye. See you all at Camp Woodward!