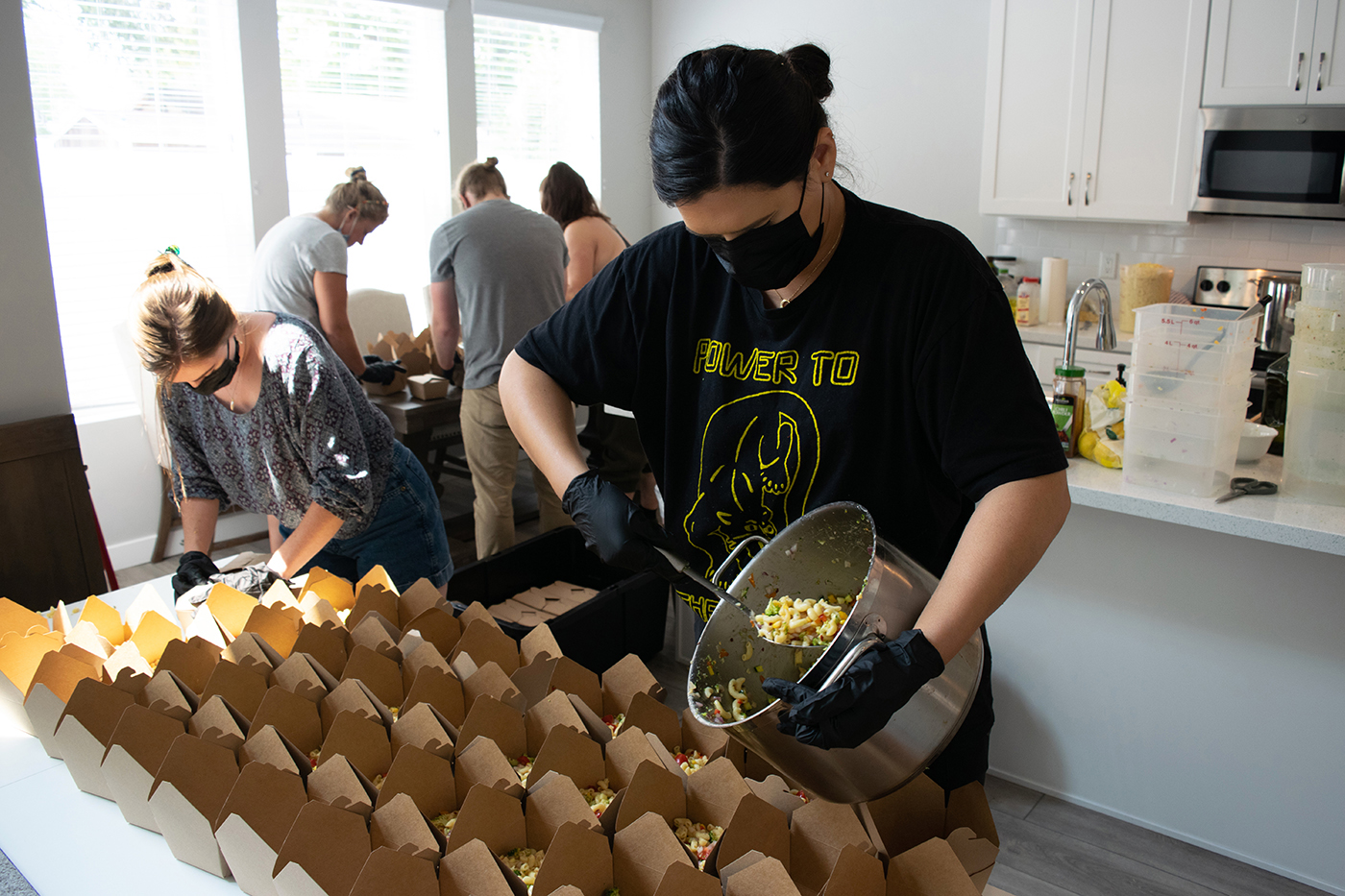 Food For Thought with the Food Justice Coalition

When Jeanette Padilla began raising money for a Christmas dinner to feed the unsheltered back in December 2020, she raised a lot more than anticipated. After feeding over 200 people, “We thought, ‘Let’s keep feeding people,’” she says. “We saw that there was a real need beyond what we were able to do for Christmas.” The surplus donations ran out three months later, and the Food Justice Coalition (FJC) took its place with Padilla at the helm, providing nutrient-dense, vegan meals on a nearly weekly basis.

The FJC is community-powered at every step: A volunteer team prepares the meals before distributing the same day to several unsheltered encampments around Salt Lake. Monetary donations help purchase ingredients, and local restaurants such as Publik Ed’s donated kitchen space when it had closed due to the pandemic. Other restaurants and small farms donate surplus food, helping to avoid food waste.

Meals ranging from pasta primavera to three-bean chili to tofu burritos are plant-based and organic when possible. As someone who has volunteered with the group, I can confirm that the food is delicious. Padilla says that by feeding unsheltered folks meals like these, it shows them that the community cares about their health. “When you are having your nutritional needs met and you’re not eating just to survive … it gives you the energy you need to move about your day, to think clearly and to be in a more positive mindset,” she says. “[We are] very mindful of the content we give them because we think that everybody should be eating this way and have access to this food.”

“We saw that there was a real need beyond what we were able to do for Christmas.”

Padilla knows this firsthand. Growing up, she experienced both food and housing insecurity after her family immigrated from Mexico. At one point, Padilla benefited from the canned-food drive at her school. “It was at that moment I really became aware of how bad our situation was and how so many other people were experiencing the same thing. The power of community to come together,” she says, “that helped save us.”

Now as a private chef, Padilla uses her expertise in the kitchen to provide roughly 1,500 meals a month. By cooking so frequently, she is able to brainstorm new and improved meals to distribute, but most important to her is the feedback given by the unsheltered community.  “We always get this first reaction of, ‘Oh wow, this looks incredible,’ and to us, that’s beautiful to hear,” she says. “Then they go and they taste it and they say, ‘Oh, this doesn’t just look great, this tastes amazing,’ and to us, it makes it all worth it.”

“We think that everybody should be eating this way and have access to this food.”

As the FJC undergoes the process of becoming a nonprofit, Padilla says she’s trying to focus on expanding the food program. “I think the biggest obstacle has been that we have not had a stable location to work out of,” she says. “We’re not this large nonprofit. We are not taking in large amounts of money. We’re nowhere near that with our funding, so we don’t have access to lease a commercial kitchen that would provide us more stability.”

Despite these obstacles, there’s more to come in the future as the organization tackles some long-term goals—the biggest being a community center that provides pay-what-you-can cooking workshops and a community-operated, free-food pantry. If you’d like to support the FJC’s mission, a little goes a long way: $5 buys two bags of ice for cold water distribution, $10 sees three cases of water (one distribution day uses six cases), $20 provides K95 masks to volunteers and the unhoused and $30 prepares 12 meals. You can donate via Venmo @FoodJusticeCoalition, and if you can’t support financially, volunteers are always needed. Find out more through their Instagram
@foodjusticecoalition.