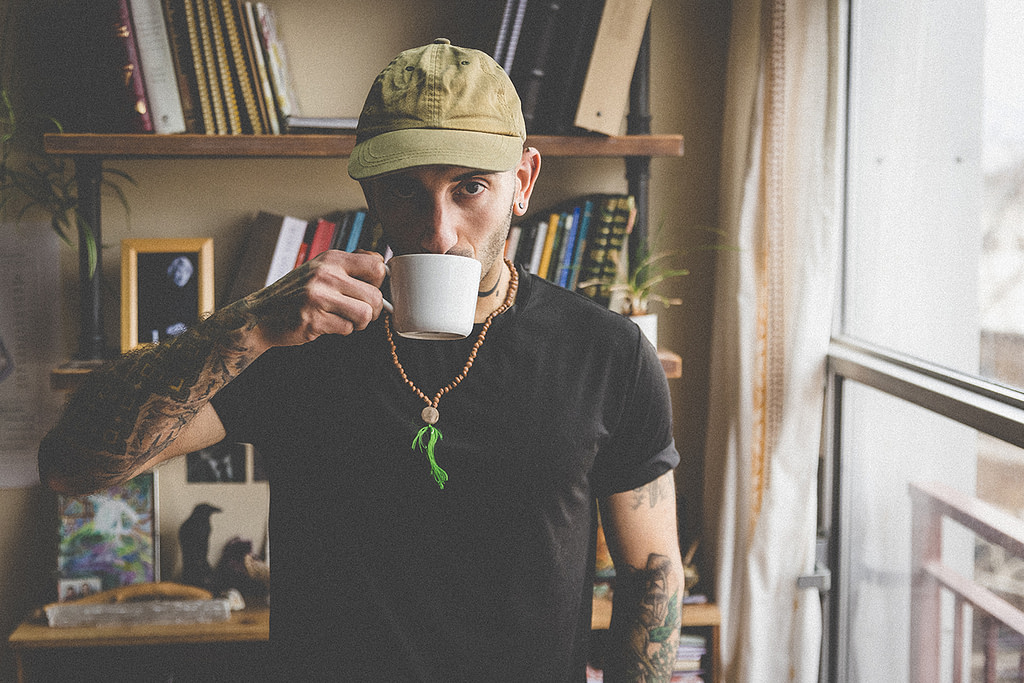 Moudi Hob: To Lead With Love

Rarely do you meet someone that can stand by their name in a literal sense. Moudi Hob considers being a lover an identifying state of being. Their last name translates to “love” in Arabic, and Hob’s work proves that they do in fact lead with love.

Born in the U.S. and raised in Lebanon, coming into adulthood carried layers of formative realizations that helped steward much-needed soul searching and self-discovery for Hob. “I was fortunate enough to be evacuated from a war zone at age 18, then relocated to Sandy, Utah, where my aunt lives,” Hob says. “Two years prior to the disruption of war, I had recognized and acknowledged the queerness in me, finding it increasingly difficult to live openly and truthfully with myself, though I could not shy away from it.” Without yet knowing it, Hob had been taking the first steps to not only find freedom within themselves but to later take a role in fighting for the freedom of others.

“I envisioned an alcohol-free space, serving tea and cookies instead, where queer people could bravely practice being themselves, sharing vulnerably who they were on any given day.”

In 2013, Hob and their now ex-husband Derek Kitchen (with the help of Restore Our Humanity and others) established Kitchen vs. Herbert, the pivotal case that found Utah’s ban on same-sex marriage unconstitutional and allowed for same-sex couples to be legally married in Utah. “The experience of filing suit itself was very formative, beginning with applying for a marriage certificate at the county clerk’s office, only to be rejected, as expected,” Hob says. A plethora of media appearances, interviews and attorney meetings came after. In October of 2014, the Supreme Court motioned to end Utah’s ban on same-sex marriage. “To this day … it brings me such joy and gratitude—someone will recognize me and say, ‘My child came out because of this case’ or ‘My daughters were finally able to marry,’” Hob says.

However, Hob’s contributions to change and progress within our community had just started with that first victory. Hob knew that bringing food meant bringing joy and stability to others, and after establishing a hummus business, catering services and cooking classes, Hob found the opportunity to share more joy through beloved Mediterranean restaurant Laziz Kitchen. “Running a restaurant proved to be no cakewalk. I immersed myself in learning everything I could as it came along,” says Hob. While Laziz is successful in its own right, Hob expanded the use of the space to offer a monthly Queer Poetry Night. “I envisioned an alcohol-free space, serving tea and cookies instead, where queer people could bravely practice being themselves, sharing vulnerably who they were on any given day,” Hob says.

“Two years prior to the disruption of war, I had recognized and acknowledged the queerness in me, finding it increasingly difficult to live openly and truthfully with myself, though I could not shy away from it.”

Hob’s next pursuit, Soulful Exploration, expands on the intentions behind the Queer Poetry Night and offers a space and guidance for those looking to discover what lies internally through writing. With Soulful Exploration, Hob will work as a writing coach and facilitate writing circles. “Soulful Exploration is my deeper dive with people, both in intimate, one-on-one settings and in groups,” Hob says. “I’ll show up with an open heart and my love, along with everything I’ve learned and am still learning.” Hob believes that through writing, individuals can find healing, growth and acceptance. “Writing is a way to process through your experiences and make sense of all the things that have inevitably impacted and shaped you,” they say.

True to their name, love sits at the core of each of Hob’s endeavors. Whether fighting for the recognition of love in court, spreading love and joy through food or helping others discover love and acceptance for themselves through writing, each pursuit begins and ends with love at the helm. You can join the monthly Queer Poetry Night, happening one Sunday a month from 7–9 p.m. at Laziz, at Riverwriting.com/events. Keep up with Hob and Soulful Exploration at Moudihob.com.