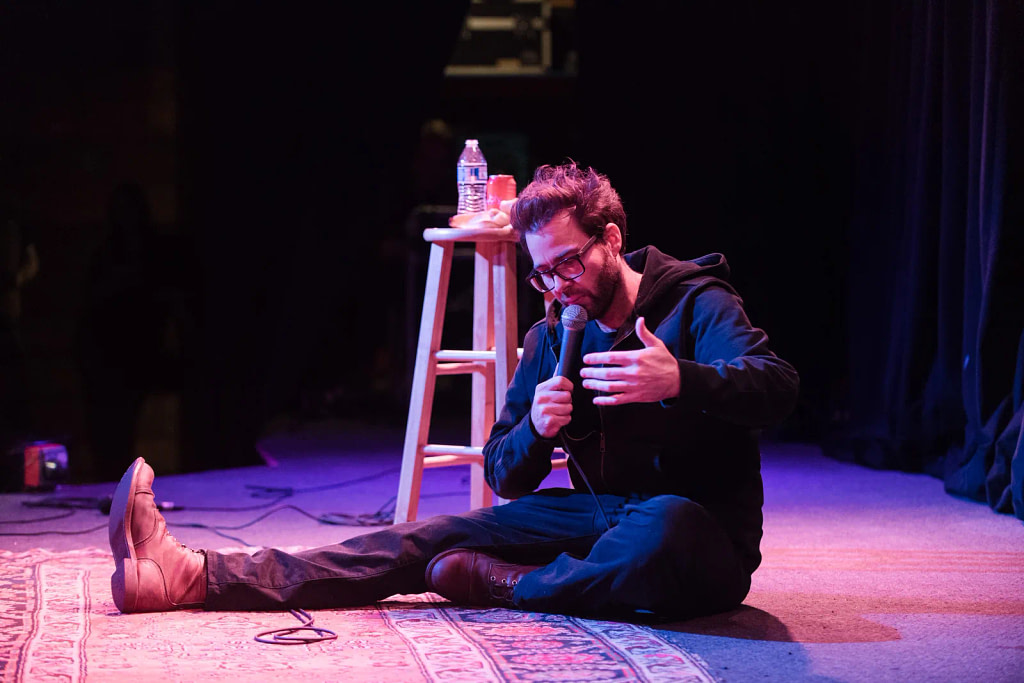 Comedian Andy Farnsworth will describe a feeling that seems so obvious when you hear it, but it’s something you yourself haven't been able to put into words. Photo Courtesy of Natalie Simpson of Beehive Photography and Video.

Andy Farnsworth: You Don’t Wear A Birthday Hat To Your Gravesite

Andy Farnsworth showed up late, and I was nervous about doing a good job, so I showed up too early. Almost immediately Farnsworth made both of us feel right at ease. I say both of us because Farnsworth’s nervous energy seems to fuel his sociability and knack for comedy. Farnsworth and I talked about his comedy career, life and his upcoming special taping at The State Room on Friday, April 29.

For Farnsworth, the line between himself and the audience seems to be as thin as the veil between the audience’s suspension of disbelief and the authenticity of the performance. “I mean, there’s no me without them,” Farnsworth says. His ability to be vulnerable both on and off stage is perhaps his most endearing quality. Farnsworth has a confessional style of stand up: He jokes openly about his shame, insecurities and even the death of his brother. He is soft spoken—a man who thinks and feels deeply. Much of his comedy comes from an introspective look at his life thus far.

“It’s so obvious, but you have to have fun yourself. It’s your job to have fun under pressure, in a way.”

“I don’t know that I feel [shame] any more than the average person or that I’m any more or less insecure,” Farnsworth says. “I have a deep sense of ‘this isn’t really who I am,’ and I’d like to get it out, and maybe [you] can acknowledge it and help me move on.” It bears mentioning that Farnsworth’s comedy at least feels therapeutic. Given the nature of this answer, I had to ask if comedy was therapy for him. “Therapy is therapy. And my therapy is about comedy,” he says.

Farnsworth standing on stage holding a microphone, arms folded, swaddled in flannel, eyes burrowing into the floor—this is a familiar sight. Farnsworth has been writing and performing stand up for over 12 years now. He has traveled the country but has mainly performed in Utah and New York. Many comics have opened up about their personal lives on stage, but few are as obtuse about it as Farnsworth. It’s almost as if the softness of his voice is asking for permission to say his candid admissions. He will raise a finger from his mic-holding hand as if reminded of something very important he has to tell you, and then you will be rapt in one of his earliest and most formative memories.

Farnsworth is also a silly man. His habit of inserting hilarious imagery into stories and observations from his life is like watching a painter. Comedy is a craft and not just the “getting on the microphone and talking into it” part. Of his earlier days doing stand up Farnsworth says he didn’t understand that craft aspect as much as he does now. “It’s so obvious, but you have to have fun yourself. It’s your job to have fun under pressure, in a way.”

Therapy is therapy. And my therapy is about comedy,” Farnsworth says.

Farnsworth focuses on the minutiae of life. He will describe a feeling that seems so obvious when you hear it, but inevitably it is something you yourself haven’t been able to put into words. For instance, Farnsworth describes his perfect Sunday as “a Sunday without fear” and talks about how going to sleep on Sunday night has always been hard since he was a little kid. This is perhaps due to Farnsworth’s experience overcoming an addiction. “You have to look at why you drink if you want to stop,” he says.“I couldn’t do stand up while I was drinking. My stage fright was so debilitating I couldn’t get drunk enough to do it because if I was drunk enough I couldn’t remember anything. I didn’t have anything anyway. I couldn’t remember what I didn’t have. ”

This is a part of Farnsworth’s life that he would like to move on from. It is an important time in his life, and it’s not who he really is anymore, but it does seem worth mentioning in order to try and explain how Farnsworth works. However, a full explanation may be impossible as Farnsworth himself likes leaving some parts of his work and himself a mystery.

April 29 at The State Room will be Farnworth’s first filmed comedy special. His first album, “Between Haircuts,” is available on Spotify. His podcast, “Wandering The Aisles,” is also on Spotify, which Farnsworth describes as “impulse buys with commentary from Earth’s most interesting, regular people.” You can find him on Instagram and Tiktok at @bambifransworth or get tickets for his April 29 show here.