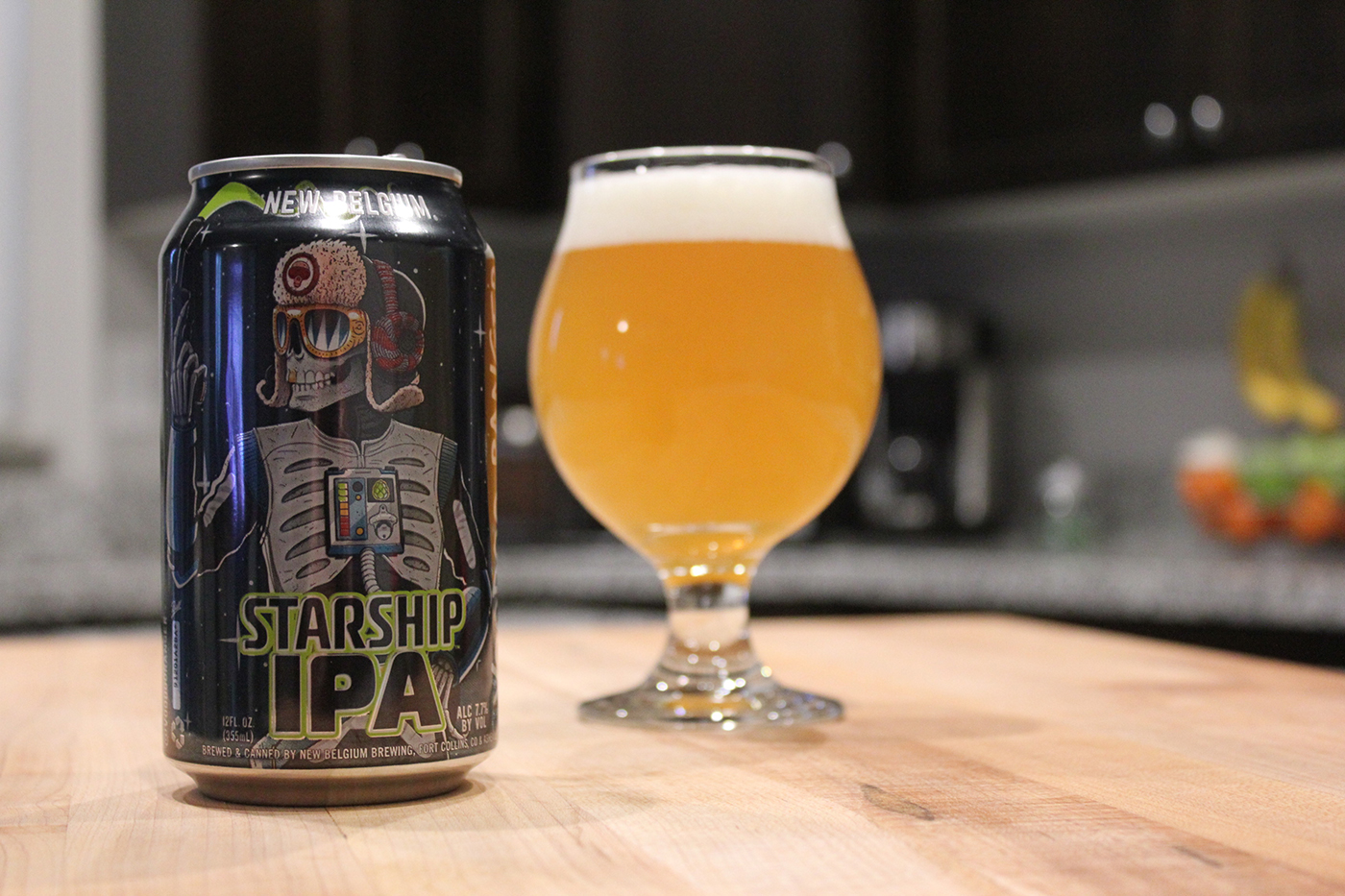 Beer of the Month: Starship IPA

We get a little nostalgic when trying out a new brew from an old favorite. Fond memories of enjoying the iconic Fat Tire have us reminiscing on our earlier days. It’s a beer we can almost taste from sheer memory. Originating in Fort Collins, Colorado, New Belgium Brewing Company has been an important brewery for many years. Starting in 1991, not only did New Belgium help usher craft beer in Colorado, but they pushed creative boundaries in the industry at large. Leading the way for traditional styles, they also had an extensive sour program and are known for hoppy, inventive and occasionally strange brews. This brewery surely encouraged countless others to run without imaginative limits, especially craft beer boom that occurred during the last half of the past decade. It’s fun to look back on when New Belgium first announced they were coming to Utah years ago. Because we have so many choices to be thankful for, distribution plans for other breweries may have been inspired by the big name to come our way.

One of New Belgium’s latest introductions is the Voodoo Ranger series. The Voodoo Ranger is a vibrant beer mascot aiming to become as iconic to beer as Iron Maiden’s Eddie is to heavy metal—and he already has quite the following. Keep your eyes out for Voodoo Ranger, and maybe give him a follow on his Instagram page—yep, he has one, @voodooranger! This month, we explore the recent addition to his liquid arsenal, the Starship IPA. In his own words, this beer “tastes out of this world!”

Starship IPA comes in a 12-ounce, outer space–illustrated can adorned by the Voodoo Ranger himself. Digging the tab into the top, it pops then a hiss squeals for release. We pour the golden-yellow liquid in our trusty glassware. The beer whirlpools into a hazy cloud and quickly collects a head of smooth foam that recedes just as quickly. Aromas of tropical fruits, fresh-citrus zest and juicy pineapple linger above the glass. A sharp mouthfeel paired with the hops offers a taste of grapefruit and faint hints of orange. The beer finishes with a semi-bitterness and the taste of clean pine. The American IPA showcases Galaxy hops, which have been supremely popular in the IPA world. At 7.7% ABV, this beer sits right in the pocket of alcohol content we really enjoy. It’s both easy to drink and effective at balancing the hops and the sweetness from the malts. We have enjoyed many IPAs from New Belgium, but this feels like one of the nicer additions they have released.

The Voodoo Ranger offers several great IPAs to choose from. There is something in range for everyone, from the original Voodoo Ranger IPA to more intense beers like Hop Avenger or Imperial Ranger—or even American Haze, which was just recently added to our local grocery stores. Many qualities that hop heads are looking for are showcased in these beers. Just like Starship IPA, the whole series shoves a ton of hops at the drinker, making for a satisfying experience.

Formerly renowned as an employee-owned brewery, New Belgium was recently sold to Lion Little World Beverages, inevitably ending its independent title and changing the landscape for our old-school staples moving forward. It seems that we often forget that this is a business, and in this case, a big business. But even with the upper-management change, they remain creative to the end. New Belgium holds a special place in our hearts. Although things are changing, we hold up hope that the spirit will remain.