00:00 / 18:49
Spotify Stitcher
RSS Feed
Share
Link
Embed
With the complex and convoluted liquor laws in Utah, breweries have had to get creative in the methods they employ to get their products to the masses. “Because of the laws brought about by S.B. 314, we had essentially been excluded from selling our beers on Sundays and holidays,” says co-founder David Cole.  In order to overcome this setback, Epic opened up a sandwich shop inside their facility.

Epic Proportions: A Clever Way to Get What You Need 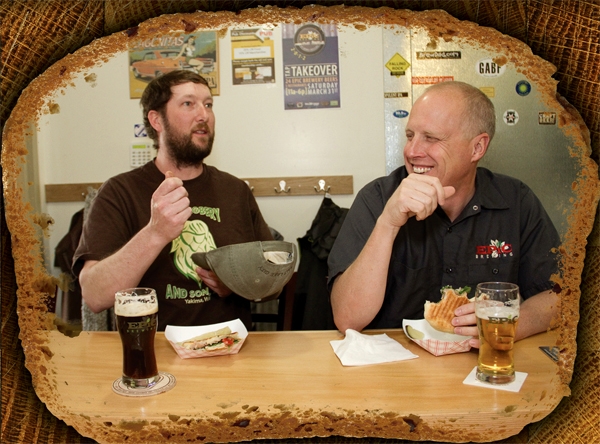 Beer has been enjoyed by billions of people for millennia.  The simple combination of hops, yeast, barley and water culminates in one of the most delightful creations the Earth has ever known.  Not long after the advent of beer, the honorable John Montagu devised the planet’s next most delicious concoction: the sandwich.  Montagu was the Fourth Earl of Sandwich, and he would revel in a variety of meats and cheeses stacked between two slices of bread.  The union of these two pastimes was probably accomplished at a tavern in some stodgy corner of the Old World, but now it can be enjoyed by anyone with the wherewithal to choose the right venue.  Enter Epic Brewing Company and its clever entourage of brew masters and libation liaisons.

Epic began its journey back in 2010 and focused on delivering full-strength beer to the thirsty citizens of Salt Lake City.  Co-founders David Cole and Peter Erickson had been toying with the idea for over a decade, and when the opportunity presented itself, the two brave men stepped up.  Together with their head brewer, Kevin Crompton, the trio embarked on an adventure that is still unfolding.

A guiding principle of the brewery has been to maintain the level of integrity of each beer they brew by keeping the recipes as authentic as possible.  The yeast strains and malts are representative of the region they are emulating.  “Water quality is also extremely important, and we match the exact water chemistry for each style of beer we produce,” says Crompton.  The exacting attention to detail has enabled Epic to create a plethora of original ales and lagers that bring the consumer a unique drinking experience.  For instance, hints of rosemary, sage and thyme populate the palate of the Utah Sage Saison.  The formidable blend of herbs enhances the beer’s flavor and makes this Belgian-style ale one of a kind.  This beer represents one of Epic’s Exponential Series beers, and it packs in the flavor and the alcohol.  One thing you won’t find at the brewery is a low-point beer.  “I don’t drink that stuff and neither should you,” says Cole.

So what does brewing full-strength beer have to do with sandwiches?  The answer is as unique as the beer.  With the complex and convoluted liquor laws in Utah, breweries have had to get creative in the methods they employ to get their products to the masses.  Epic recently devised a new way to ensure that the local population could acquire its beers and nourish their gullets at the same time.  “Because of the laws brought about by S.B. 314, we had essentially been excluded from selling our beers on Sundays and holidays,” says Cole.  In order to overcome this setback, Epic opened up a sandwich shop inside their facility.  Jokingly referred to as “the tap-less taproom,” the shop serves up tasty culinary delights and samples of various Epic brews.  Inside the tiny enclave, customers can sit down at the counter and order up any number of enticing entrées.  The turkey avocado is a personal favorite, and it satisfies the deepest of hungers. “We tried to focus on using only high-quality, Utah-manufactured products,” says Crompton. The breads, meats, cheeses and garnishes all hail from our fair state and support the local economy.  “It also coincides with our philosophy that the consumer pays a little bit more, but they get something a little bit better,” Crompton added.

The development of the sandwich shop was definitely a step into unfamiliar territory for the team, but it was done out of necessity. “We aren’t here to be in the restaurant business. The restaurants in town are our customers and it is not our intent to compete,” says Cole.  The stipulations placed on Epic are twofold and have resulted in the brewery having to give up some valuable production space in order to make their product more readily available.  The first is that they were forced to obtain an additional liquor license in order to be able to sell food and beer in one location.  The second revolves around the requirement that 70 percent or more of the sales made within the “restaurant” must be from food.  At the end of the day, it seems that this is just a way for the state to pull in a little more tax revenue.  Currently, Utah is one of the most heavily taxed states when it comes to alcohol.  Cole further notes that the tax is quite regressive and is imposed upon them whether or not they make a profit.  However, he does admit that it is not the DABC that is truly to blame.  It is the lawmakers and politicians who make it increasingly difficult for him to do business.  “We want to be known as a destination for wonderful beer.  If that is going to continue, people need to get out and vote and contact their politicians,” says Cole.

As Epic marches toward brewing freedom, it will continue to produce an unparalleled mix of exceptional beers.  You can stop by the brewery located on 825 S. State Street and pick up a bottle of suds and a sammy, even on Sunday.  Check out epicbrewing.com for hours and their menu.