SLUG Mag Soundwaves
Episode #403 – Mykah
00:00 / 21:59
Spotify Stitcher
RSS Feed
Share
Link
Embed
The concept of aging beer in oak casks is nothing new to the brewing world. It was how the drink was served and stored at the dawn of the beer age. Hell, even oaking beer with soured bacteria was a well-known craft perfected by the Belgians at the beginning of their artisanship. So why would this have anything to do with Utah? Believe it or not, Utah has been busting out high-quality oak-aged brews for beer festivals since 2005, and the general public since around 2007.

Getting Wood for Utah Beer 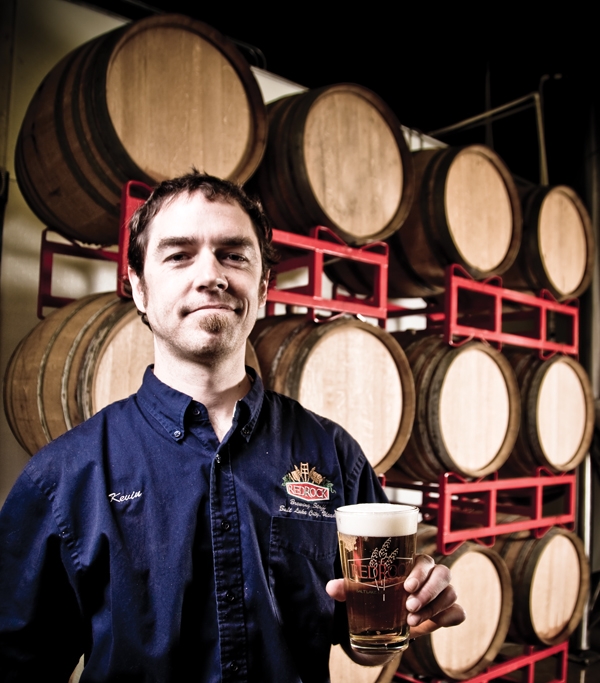 “Some people just want to put beer in a barrel and called it oak aged beer, but it takes a long time for those flavors to develop.”” –Kevin Templin, RedRock Brewing Company

The concept of aging beer in oak casks is nothing new to the brewing world. It was how the drink was served and stored at the dawn of the beer age. Hell, even oaking beer with soured bacteria was a well-known craft perfected by the Belgians at the beginning of their artisanship. So why would this have anything to do with Utah? Believe it or not, Utah has been busting out high-quality oak-aged brews for beer festivals since 2005, and the general public since around 2007. Some of the oak-aged brews from RedRock and Squatters are even taking home medals.

Oak aging beer can lend to the complexity in flavor, help deepen its characteristics and give a brewer a variety of options to alter the beer according to any stylization that they are trying to achieve. Brewers can use oak that is fresh to give it a robust “oaky” flavor, they can use whiskey or wine barrels to give their brew the flavors that the oak has absorbed, or they can use the oak as a vessel to dose the brew with wild yeast to create a soured ale. From the interior charring of the oak barrel itself, to the origin of where the oak was grown, there are limitless possibilities to what the brewing artist can accomplish. Brewers like Kevin Templin of RedRock Brewing Company revel in the unpredictability of oaking a beer. “You never know what you are going to get out of the oak, every batch is going to be different,” says Templin. Oak is essentially a playground for any brewer.

In this decade, oak aging has reemerged and it has thrown the brewing world into a whole new wave of craftsmanship. There are now brewing festivals like the Little Woody in Central Oregon that are solely dedicated to the lengthy process of oaking a beer. The shift has allowed smaller breweries to stand out and be recognized for their talents in the competitive brewing world. Two of our local breweries, RedRock and Squatters, have gained national and international recognition at brewing competitions in the category of oak aged beers.

RedRock released its first oaked brew to the public in 2007, although their affair with oak started back in 2001 when they first got their oak barrels. The initial batch of brettanomyces (wild yeast) was even blessed by Templin’s uncle, Catholic priest, Father Ken Templin. After years of playing, an oak aged Belgian seemed to be the one that stuck. Now known as The Rêve, it is the beer that I would consider to be the pioneer that made oak commercially available to the Utah craft beer scene. At its original release in November of 2007, it had been a work in progress for roughly three years. This brew was actually winning medals before it was released to the public.

The Rêve (French for “dream”) is an oaked Belgian tripel that is aged with brettanomyces (wild yeast) imbedded in the barrel. The newest batch is a fantastic combination of a medium bodied high gravity Belgian, with aromatics of candi sugar, pears and oaky tartness. The flavor leads into a sweet candy with blends of pear and a dry tart finish.

Another release from RedRock is the Paardebloem (Flemish for dandelion). This collaboration beer with New Belgium was brewed back in 2008, and while New Belgium released theirs much earlier, RedRock, in true oak-loving fashion, aged their version in American Oak with some funky yeast. “It gave it a bit of spice and added certain bittering compounds,” says Headbrewer Templin. What sets the Paardebloem aside from other Utah brews is that dandelion greens were used in place of hops to bitter the beer along with the use of more fresh dandelions and grains of paradise for flavor.

RedRock’s new brew house came equipped with a total of twenty barrels of American and French oak. The new facility will not only increase their production, but also aid in the return of the Paardebloem and Rêve. With these new vessels RedRock also hopes to add a couple additions to the line including a double IPA aged on brettanomyces and soured brown ale with some wild bugs from New Belgium Brewing.

Although RedRock is the pioneer in oaking, Squatters seems to be the local brewery to keep an eye on. When we last talked to Brewmaster Jenny Talley (2008 Beer Issue), she was in the midst of releasing The Fifth Element—an oak-aged Saison inoculated with wild yeast cultures that would sour the beer, increase its acidity and add a depth of flavor. As we all know, beer is made up of water, hops, barley and yeast—what set this beer aside is of course, its “fifth element,” oak. On this particular batch, Talley started out with a very basic light Belgian recipe and pitched what she referred to as, “The most difficult yeast I have used.” This acted as the base for the Fifth Element before the oak was brought into play. The oak used on this particular batch came from Firestone Walker, and was previously used to ferment their Double Barrel Ale (which is available in most of our liquor stores). Talley dosed one of her four barrels with three wild yeast cultures and then filled them with her Saison. This allowed the wild yeasts to sour a single barrel, go airborne and infect the others. Once all the beer had been soured and the yeast had developed how Talley wanted it, she prepped the bottles for a higher carbonation and was set for sale.

The 2010 batch of Fifth Element is up to the quality of the original, which was a medal winner at the 2008 GABF (Great American Beer Festival). This one comes out of the cork-and-caged Belgian bottle a soft yellow straw color with a perfectly white head. The aromatics are rich in yeasty funk, light citrus fruits and oak. The flavor is fronted by lemons that mellow out into peaches and apricots, and finishes off with an oak dryness and a sour pinch.

This leads to Talley’s latest oak endeavor, “529,” an Oak-aged Oud Bruin. Shortly after Talley had bottled the original Fifth Element in July 2008 she laid down her Oud Bruin in the infected oak for 18 months (529 days) to age. Once the brew had aged to Talley’s approval she blended it with a fresh two-month-old un-oaked version to balance the flavors of acidity and malty character. From there the brew was corked, caged and put out for sale.

Much like those first two breweries, Uinta had also been aging beer behind closed doors for approximately five years before it made it to production status. Initially aging their famous Barley Wine in bourbon and sherry casks, Uinta had only intended to give this small running of beer to out-of-state clients and to show off at some brew festivals. It sat in the barrels for two years before it saw the light of day, and as if the beer gods blessed the brew geeks below, some bottles of Uinta’s Bourbon Barrel Barley Wine “BBB” managed to make their way to our liquor stores. If you managed to get your hands on a bottle of this, hold on to it and save it for that special occasion. The second release of BBB was released earlier this year and varied from its predecessor. The newest batch was aged only a single year, however, it was just as hard to get your hands on.

Uinta Brewing Company’s newest oak brew was released this June as part of The Crooked Line series of beer. Their Crooked Line is a collection of beers that are not on the same line as other beer styles. Their goal was to push the limits of style guidelines and explore new brewing techniques, so how could oak not be involved? In this lineup there was the release of Labyrinth Black Ale aged in rye and bourbon barrels, Cockeyed Cooper Bourbon Barrel Barley Wine-aged in its oak for six months. These are hopefully just a taste of the new projects that Uinta is working on.

Although Squatters, RedRock and Uinta serve as the heavy hitters in the world of oakers, other Utah brewers have been playing with their wood too. Bobby Jackson of the Bohemian is currently aging their famous Cherny Bock on some heavy American oak. This release is still up in the air. Jackson only says, “It will be ready when it’s ready.” Chris Haas of Desert Edge has just started lightly dosing his cask beer with oak. Haas said, “We’ll be oaking beer if the style goes with it.” So if you are getting that craving for oak, look for Desert Edge cask on tap at The Pub or The Bayou. Haas even hinted at a bourbon-barrel porter that was produced around the brewery and may go into production. Donovan Steele at Hopper’s recently released a golden rye aged on American oak that will damn near put a splinter in your tongue.  And finally, Epic Brewing Company acquired some used bourbon casks that will eventually be used to age a smoked and oaked Belgian along with a slew of other projects that ought to keep head brewer Kevin Crompton’s hands busy for quite some time.

Although Utah isn’t up to par on releasing the number of oaked brews that big names nationwide have released, we are sure as hell on track to put some big numbers on the board in the coming years. Small batches means that brewers are giving these brews the utmost attention, resulting in incredible beer. It is in your best interest not only to keep an eye out for these immaculate beers, but also give credit to our local brewers who are doing a damn fine job with this artisan craft, so that they will continue to delight us.