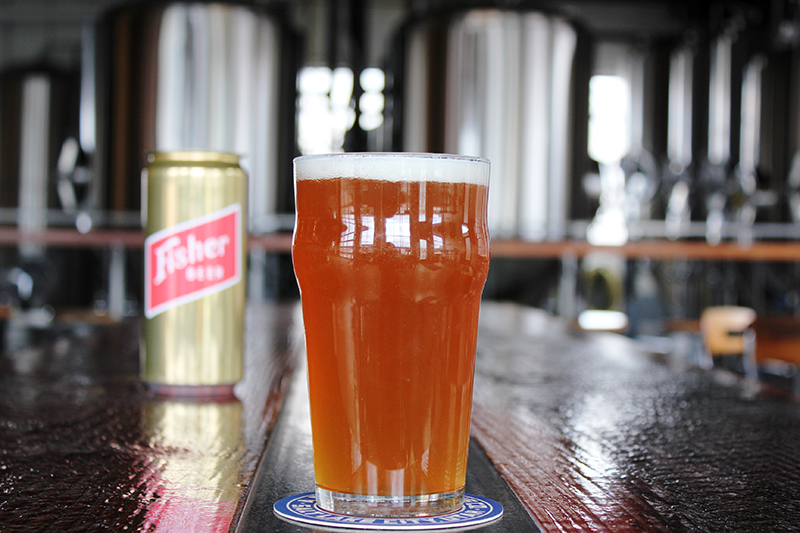 Walking into Fisher Brewing Company for beer as the doors open on a Saturday morning may be the perfect way to start the weekend. We ordered up the newest pale ale on tap, and the barkeep served it to us as a nameless beer. They do a fantastic job of turning over their beer, keeping it fresh, all while adding new brews. Each time you visit, you’re highly likely to be greeted with new offerings you haven’t had yet. (The craft beer community loves this kind of stuff!) Fisher’s team and Head Brewer Colby Frazier like to mix it up to see what works and what doesn’t. If a beer is popular, it may get added to more of a frequent rotation.

Taking a seat at the bar, it was interesting to watch as they drew up a fresh sign for the draft list. Within minutes, the brewery’s recent creation was labeled “Hayduke.” We thought to ourselves, “Why haven’t we featured a Fisher beer as the ‘Beer of the Month’?” Well, the answer is both frustrating and intriguing to fans of great, local craft beer. It’s because their beer is consumed by the masses quickly—meaning when it’s gone, it’s gone. These beers generally do not last long enough to write a proper feature on them. The great news is all of their beers are solid and lovely beverages that are meant to be enjoyed fresh and cold.

We were served the Hayduke in a nonic pint glass from the draft line at the brewery. The crisp beverage flowed nicely into the freshly rinsed glassware. A substantial, pristine-white crown of foam capped off the pour. A chameleon in the light, this pale ale touts colors of a hazed, bright-orange and yellowish, wet straw, but with a clean appearance. Aromas hint of earthy hops, pine and grains, which are lost notes in many of today’s fruit- or citrus-driven hoppy beers. Each swig gives off a lingering bitterness from the hops and the frosty drink. We pick up citrus fruit rind or young pear as the flavors flow through this medium- to light-bodied brew. The Hayduke is easily drinkable. It seems to be a throwback to many of the early renditions of the style, like craft beer pioneers Sierra Nevada’s Pale Ale.

We tried the Hayduke next to several other pale ales that Fisher Brewing Co. had on tap—it was significant how different each of them were. They all had their own individual characteristics, all fantastic. Being part of the craft beer scene, we get both angles. We love going to our favorite places and knowing what we can get. But we are also curious souls who like to hop into the latest and greatest beers. It’s a double-edged sword—Fisher, who was part of what seemed to be the first wave of new Utah breweries, has set standards for new and local brewhouses. That standard is to create a welcoming, fun spot where you and your friends can come and have a pint, plus experience an ever-rotating lineup of premium drinks crafted by people who care. While we have tried to time this review so you can still have the Hayduke, even if we missed it by a little bit, you can be rest assured there will be something awesome on tap waiting for you.

You can find Fisher and other great local breweries at SLUG Mag’s Brewstillery at Trolley Square on May 18. Find tickets at 24tix.com.