I’d brewed with plenty of folks before, but had not envisioned something as large as this. It turns out that Lauter Day Brewers is Utah’s largest homebrew club, with around 60 dues-paying members, which ensures that every one of their events is crowded. 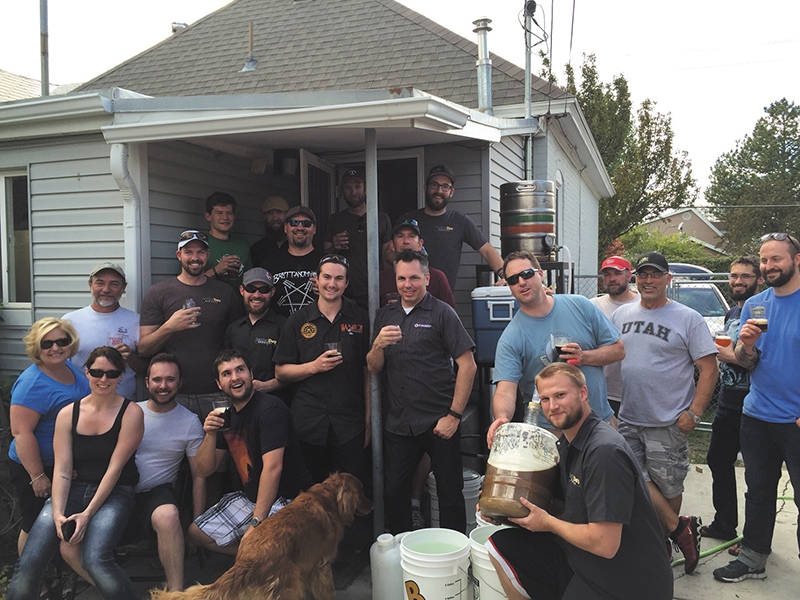 When I contacted the Lauter Day Brewers homebrew club to do an interview, they invited me to one of their group brewdays. As an experienced homebrewer, I’d brewed with plenty of folks before, sometimes in groups, but had not envisioned something as large as this. It turns out that LDB is Utah’s largest homebrew club, with around 60 dues-paying members, which ensures that every one of their events is crowded. I walked into current Club President Clay Turnbow’s driveway and was instantly overstimulated: There had to be around 25 people there already and at least half a dozen different beers being brewed. There were several complete brewing setups or “brew sculptures” arrayed around Turnbow’s backyard, and everyone was helping, talking or sampling beer in a garage that had been converted into a bar/laboratory. With so many members present, I wondered, “How many is too many?”

“Sixty members is not a problem but an opportunity,” says Club Founder Michael Pezley, who started LDB around two and a half years ago. Their name references both the dominant religion here in Utah and the step of lautering during the brewing process. “The entire reason for this club was accessibility,” he says while handing me one of the countless and varied beer samples I tried that day. Agreeing, Turnbow says, “This club is all about education and inclusion. To a novice, brewing can seem like a tall glass to stomach, and these guys were attempting to bridge that gap by lending their resources and years of experience toward making it go down smoothly to the last drop. The club includes members of all experience levels and abilities. While I was there, several members were showing two relatively new members how to do a full all-grain brew, and others were talking yeast cultivation.

The smells of boiling wort (beer before yeast is added) and grilled meat filled the air, creating a party atmosphere as I mingled with the members, asking questions and letting the attitude here speak for itself. Everyone had homebrew to sample or commercial beers they hoped to emulate and learn from. The level of feedback and discourse was positive and almost joyous. “Nobody tells you your beer sucks,” says member Cameron MacFarland. “Nobody turns anybody away. They say, ‘This is what you can do about that.’” This kind of energy can be intoxicating, and I was soon engaged in discussions about the correct balance for a doppelbock and lending mine to the chorus of friendly voices warning of a boilover at one of the many simmering pots. With so many members, meeting new people at each meeting can be a real feat, but with such a laidback tone to these gatherings, it doesn’t seem like a problem. Longtime member Scott Selfridge summed it up well: “There’s no pretension,” he says. “It parallels playing music in that you never know what level people are at.”

That isn’t to say the LDB doesn’t focus on rigorous improvement and educational opportunities for its members. “We tap members to do demonstrations, and topics range widely,” says Pezley of the information sessions held at every official meeting. You can imagine that finding a venue to host that many people can be a chore, but it hasn’t been a problem so far. Recently, Shades of Pale Brewing opened the warehouse of their new Salt Lake City facility to host such a meeting, and the turnout was great.

When approached by The Annex to do a collaboration beer, members split into six different teams and each submitted a draft-strength candidate. The brewers at Epic Brewing/The Annex picked from among them a pale ale–fermented 100-percent with a wild yeast called Brettanomyces, which has been brewed several times to critical acclaim. The club also recently acquired a couple of oak casks from Beehive Distilling, who had used them to hold and age their Barrel Reserve Gin. When presented with such an opportunity, the club came together to work on a group project to fill the casks. It takes many homebrewers working together to fill one 60-gallon cask, let alone two, but two beer styles, an IPA and a farmhouse saison, were decided upon and brewed in sufficient quantities to fill the casks all at once.

Such efforts seem pretty par for the course around here. “It’s all about learning and having a good time,” says club Vice President Andrew Ayers. Working together, inspiring each other, backing up your friends and constantly tasting new things seems like a pretty good deal to me. Member and media officer Brian McKray agrees, saying, “I’m just so excited to have a community of likeminded people to learn from and grow with.” When I left Turnbow’s backyard that day, another three brews had been started and members filtered in as others left. I’d tasted a couple dozen beers and met at least as many brewers. If passion always burns brightest in the presence of other passion, this casual brewday for the LDB was a bonfire of enthusiasm for all things beer.