SLUG Mag Soundwaves
Episode #395 – Cotes
00:00 / 18:06
Spotify Stitcher
RSS Feed
Share
Link
Embed
Over the last decade, Salt Lake City has seen exponential growth in the craft beer scene—the sturdy backbone of this movement has been the home brewers. One of these home brew aficionados is Kincade Bauer. Bauer worked closely in Salt Lake City’s music scene as a promoter for years and currently works as a liquor rep and as the Beam Ambassador for Utah. Despite slinging booze in his working life, it has not stopped him from crafting his own libations at home as a hobby.

Homebrewed: An Interview with Kincade Bauer 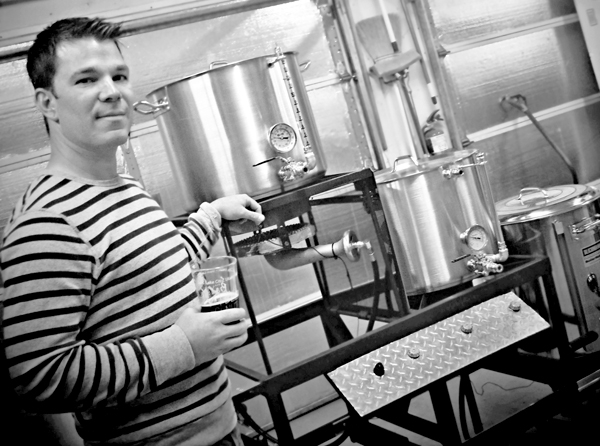 Home Brewer Kincade Bauer in the brew room he has created at his home. Photo: Megan Kennedy

Over the last decade, Salt Lake City has seen exponential growth in the craft beer scene—the sturdy backbone of this movement has been the home brewers. One of these home brew aficionados is Kincade Bauer. Bauer worked closely in Salt Lake City’s music scene as a promoter for years and currently works as a liquor rep and as the Beam Ambassador for Utah. Despite slinging booze in his working life, it has not stopped him from crafting his own libations at home as a hobby. Home brewing for the last five years, Bauer has participated in the home brew boom Salt Lake has seen, and the diverse crowds that have come from it. Bauer was kind enough to take time from his hectic schedule as a dad, home brewer and facilitator of inebriation for SLC to sit down with SLUG.

SLUG: Why did you start home brewing?
Bauer: I had a real interest in making my own beer. A friend of mine, Kevin Crompton, who is now the head brewer for Epic, agreed to come to my house and walk me through a couple brews. Another thing that got me started was my cousin who had been home brewing for years. I had gone over to his house and said, “Wow, if he can make beers this good at home, I’d like to try my hand at it.” So, it was a combination of trying my cousin’s awesome home brews and having someone who knew a lot about the process teaching me.

SLUG: Utahns always complain about the 3.2 here. Would you say home brewing is a necessity for any craft beer lover in Utah?
Bauer: I think it was a decade ago, but there are microbreweries in Utah turning out some phenomenal, world class beers. It’s not a necessity to do if you want to drink good beer, it’s only necessary if you want to make your “own” good beer.

SLUG: What are you brewing now?
Bauer: I always try and keep something that will keep my wife happy—honey wheat or a wit. I try and keep a dark going and I almost always have a pale pouring.

SLUG: Where do you buy your supplies?
Bauer: Either The Beer Nut or Salt City Brew Supply—I think both have a great selection and great customer service.

SLUG: What are the benefits of having the option to shop at two different home brew supply shops?
Bauer: Salt City is geographically closer to me, which is nice—but when one shop runs out of something, the other usually has it. With so many varieties of yeast, hops and malts, it has made it a lot easier to keep on top of those last-minute emergency runs. I think that having more than one home brew shop stands to expose a lot more brewers in Utah to the art of craft brewing and home brewing. I mean, people who are living up on the bench in Cottonwood probably would not have found places like Salt City.

SLUG: What do you enjoy most about our home brewing community?
Bauer: I think what makes the hobby great is everything is open to interpretation. The best thing that can happen for the hobby is more people brewing. I think there has been an explosion of home brewers in Utah in the last ten years—I am certainly one of them. Great [expermentation and scientific research] have come out of commercial craft brewing, have made their way down into home brewing and have really elevated the quality of the end product.

SLUG: So, the beer has been brewed and you’re drinking your own craft. Do you still buy beer?
Bauer: Absolutely. Don’t get me wrong, I could get by with my own brew, but I think I’d get bored. With the explosion of good craft brewers in Utah, it seems like every time I turn around, someone has got something new, and I need to try that! If you have the love for beer, you need to try what’s out there.

While Bauer is not as active as he’d like to be in the home brewing community, he still manages to keep his fermenters full and the beer flowing at home. If you happen to see this man racing through your nearby home brew shop, buy him a batch of beer.