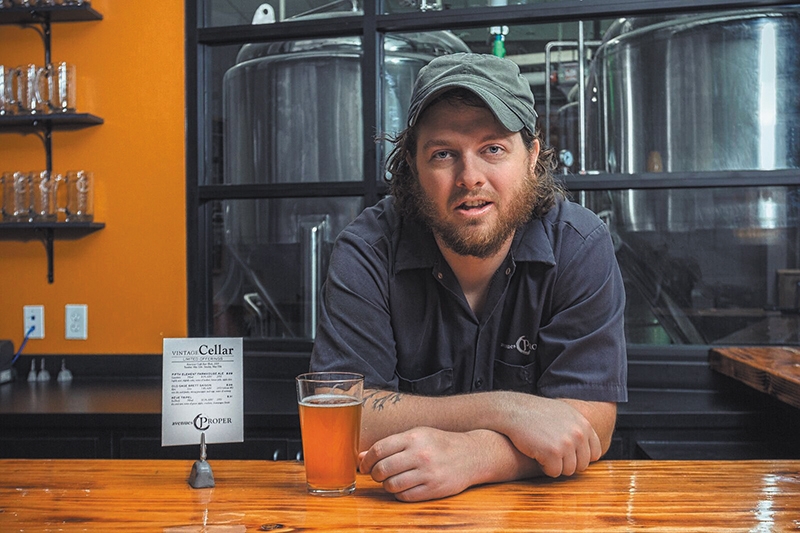 Brewmaster Rio Connelly is expanding Avenues Proper operations with Proper Brewing Company, alongside partners Liam Connelly and Andrew Tendick (not pictured). Photo: Talyn Sherer
We Utah beer drinkers have our work cut out for us. We must constantly tell out-of-state buddies (and tourists) how the not-so-clear liquor laws influence our drinking habits. Trying to make sense of the legislative intricacies of our system is at least a three-beer ordeal. But coming this fall, those who imbibe will have a new place to take those curious sorts when they ask, “So what’s up with Utah beer?”
From the creative souls that brought us the Avenues Proper Restaurant & Publick House comes a salient new concept to keep beer enthusiasts entertained. The trio of Andrew Tendick, Liam Connelly and Rio Connelly is embarking on their latest business endeavor and longtime goal of creating a full-scale craft brewery. Proper Brewing Company is set to break ground this fall and promises to deliver an engaging drinking experience. Bringing together all the elements of their various backgrounds, the team is excited to develop the concept and create an exciting offering for the Utah craft beer community.
April 2015 marked the second anniversary that Avenues Proper has been providing a unique dining and drinking experience to the people of Salt Lake City. “The community response thus far has been positive, and this has been our best year [quarterly], but it is clearly time to expand,” says Liam.
The current brewhouse at Avenues Proper is only a five-barrel system with limited storage space, which means that beers come and go quickly. Rio is a busy Head Brewer, taking the job totally upon himself to create stellar beers the way he wants them. “Since I was a young brewer, it has been more about the process than the product,” says Rio. His affinity for crushing grains and combining unlikely ingredients has made his beer sought after all over town.
Avenues Proper’s evolving in-house beer selection has encompassed a variety of styles over the years. For Rio, it is a constant but rewarding challenge to produce flavorful and compelling beers while adhering to the 4-percent ABV required by the state for draft beers. “Just imagine what will happen when the leash is taken off and he can brew full-strength beer,” says Liam.
As the summer begins, the trio is aligning their interests in creating Proper Brewing Company. They are investing in the renewed Central 9th District around 900 South and Main Street, an area that will hopefully grow up to be a celebrated part of the city and attract diverse visitors.
This location has the zoning permits to allow for a legitimate 10- to 15-barrel brewing-and-manufacturing facility that could also encompass a tavern and restaurant. Breweries outside of Utah are the inspiration behind the construction, in that they create an experience for the visitor by making them feel like they are part of a community. “It should be about a balance—living life and drinking beer,” says Rio. With the tavern portion of the facility, they aim to provide a unique atmosphere of fun and camaraderie. Liam says, “I can’t get too specific at this point, but skeeball is definitely going to be part of the show.” Also being considered for development are real barroom games and the possibility of prizes.
In addition to the tavern and brewhouse, there will be a stand-alone restaurant on premises. This is going to be set up as a simple food concept store that provides tasty burgers and other fare to pair with their latest beers. The culinary delights that the restaurant delivers should be less complex than the offerings at Avenues Proper, but there is no doubt that they will be equally delicious.
The “Proper Compound,” as they refer to it, will eventually host live music, events and festivals. Imagine listening to local bands under a starry sky with your friends, having a cold brew and a hot sandwich, freshly made on the spot using prime local ingredients. “Quality is paramount to what we are,” says Liam.
Being able to produce a variety of beers to  actually bottle and sell them on property and through distribution channels is one of the overarching goals of Proper Brewing Company. Of particular interest is the crew’s ability to use Avenues Proper‘s brewhouse as a testing facility for new beers. Creating small batches and being able to help them reach a larger potential is an asset they will use to their advantage. One of Rio’s objectives is to see a resurgence in regional styles, something missing from the U.S. since Prohibition. By starting slow and steady and maintaining their boutique feel, the trio is confident that their brewery is going to establish its place in the community. The team has also applied to have both a club license and a Type 5 Package license, which will allow them to sell cold, high-point beer right from their door for consumers to take home.
“This is a lifestyle business, and it is something we want to continue doing,” says Rio. He goes on to elaborate on the strong sense of belonging to the larger whole of craft brewing in Utah. His mentors and partners have nourished his creative tendencies through the years, and it’s time to give back by developing something new.

Keep your eyes open for more details, and look for new styles to appear in places like Avenues Proper and City Weekly’s Utah Beer Festival.