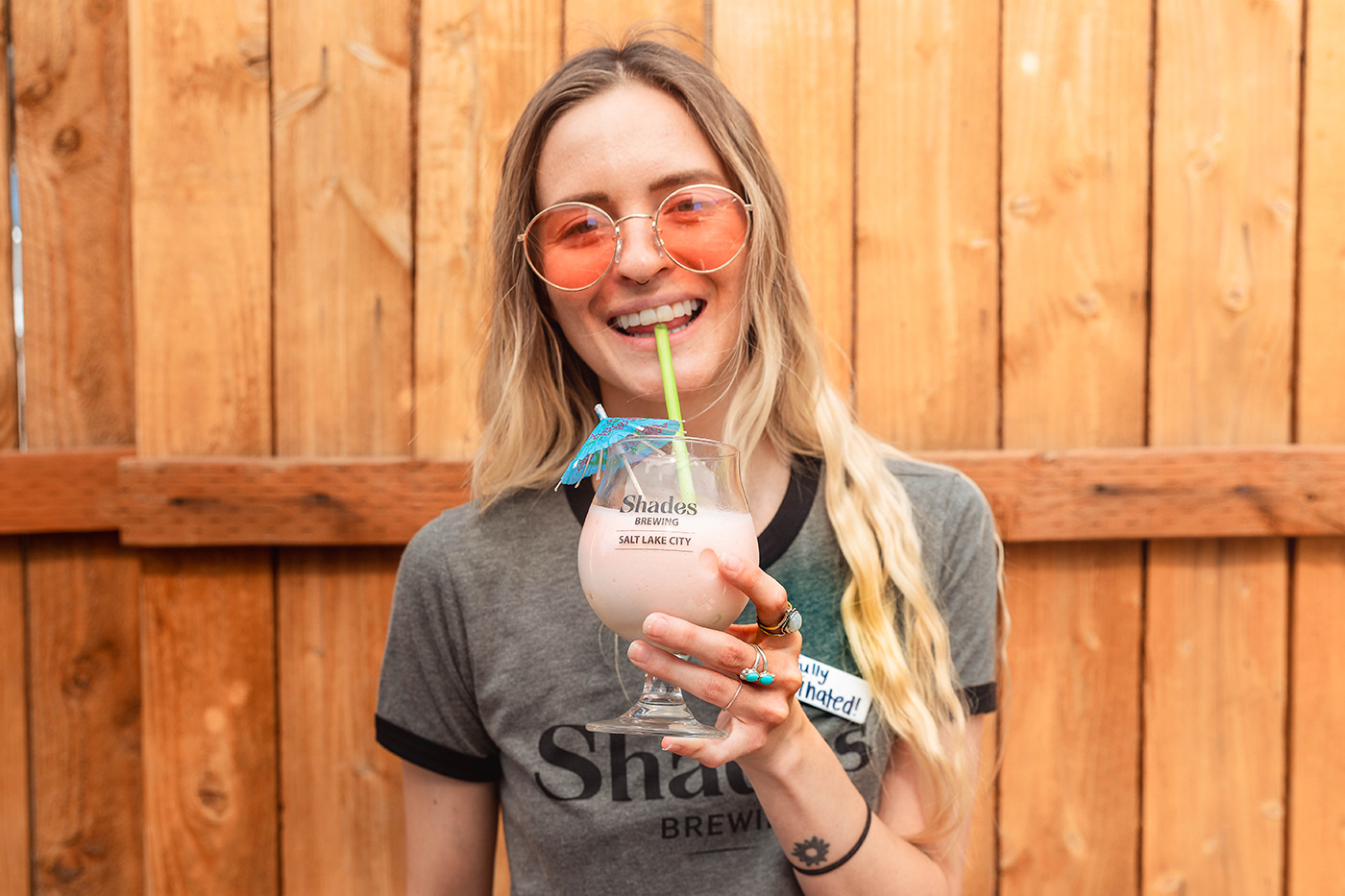 With craft beer growing as an indelible presence throughout Utah, breweries are pushing beer boundaries with new and surprising formats. Shades Brewing’s Slurry, Slushie and Sloshie series and Proper Brewing Co.’s Death in the Afternoon (8% ABV) are recent releases that will tantalize your taste buds and get you reconsidering how you might enjoy your next craft brew. The Slurry is the triple-fruited sour-beer base that Shades uses to make the Slushie and Sloshie, which are literally beer slushies. Nodding to cocktails, Proper’s Death in the Afternoon is their Lei Effect Gose aged in rum barrels. They’ve also aged their Mexican-style, imperial amber lager, Libre, in reposado barrels to create Well Rested (7.5% ABV), coming July 9.

“Last summer, our Head Brewer, [Márcio] Buffolo, wanted a refreshing summer drink, like a slushy. So, he took our beer [and] put it into a slushy machine.”

Shades Brewing’s taproom is a quaint area strung with bistro lights above repurposed high-top barrel tables, making you feel cozy amid the giant silos. I was greeted by Shades’ friendly General Manager, Ellie Mcdonald, who, with a bright smile asked, “Can I get you a Slushie?” I was handed a drink that looked like frothed snow, its tulip glass blanketed with an opaque sheet of ice. A cold slushy couldn’t be more fitting for a hot Saturday afternoon. “It’s mango apricot,” Mcdonald says. My first sip was sweet, with mango coming in at the front of the palate while the apricot finished in the back. Every sip was refreshing and enjoyable, and I quickly understood the allure.

Shades Brewing must have received some cheat code from the beer gods, but like every life-changing invention, the Slurry, the base brew that Shades uses to make their Slushies, was born out of necessity. Mcdonald says, “Last summer, our Head Brewer, [Márcio] Buffolo, wanted a refreshing summer drink, like a slushy. So, he took our beer [and] put it into a slushy machine.” The idea soon led to Shades’ Slurry sour beer series, which comprises Shades’ triple-fruited sour beers like Peach Habanero, Sugar Plum and Mango Apricot, with Blueberry and Strawberry Lemon in kegs at the taproom at the time of this interview.

Once put into the slushy machine, these Slurrys quite literally become beer slushies. Shades chooses the fruity styles of beers for the Slurry beers that can be made into slushies, but technically, you can make any beer into a Slushie if it has little carbonation. “There’s no crazy secret … We literally decarbonate the beer by pouring it back and forth into pitchers so there is very little foam. We put it in the machine, and we’re done,” says Mcdonald. “After we made the Slurry, we added a shot of liquor [to the Slushie] and called it the Sloshie.”

For the grand finale, Mcdonald told me that I could add whatever liquor I’d like—“Whatever you think will taste good,” she says. I opted for a shot of Malibu Coconut Rum, trying to stay within the tropical theme. If I thought my Slushie was good, my Sloshie was perfect with just a hint of coconut. I couldn’t taste any bitter alcohol flavor, and every sip was pleasant without being overly sweet.

“After we made the Slurry, we added a shot of liquor [to the Slushie] and called it the Sloshie.”

Shades isn’t the only brewery checking the box on creativity and innovation; so is Proper by experimenting with aging beer in liquor barrels. “We are about creating unique beer that people actually want to drink,” says Jeff Bunk, Head of Cellars at Proper Brewing Co. This is why creating Death in the Afternoon and Well Rested came naturally to the Proper team. “A beer and a shot just go hand in hand, so we played off of it,” he adds. Death in the Afternoon is Proper’s Lei Effect Gose beer aged for eight months in Jamaican rum barrels, and Well Rested is a Mexican-style, imperial amber lager aged for 10 months in reposado barrels. “We also wanted these beers to be full-bodied, have a lot of flavor and more alcohol, but not kill you for the rest of the day,” says Bunk.

Death in the Afternoon and Well Rested are known at Proper as Cocktails in a Can, which is a name used only among themselves but refers to their barrel-aging program that they focus on every year. “The Cocktails in a Can program is a way for us as brewers to experiment and develop new recipes that you wouldn’t expect,” Bunk says. “It keeps beer-making exciting, and you never know which beer will become the consumer’s favorite.”

Death in the Afternoon smells sweet, like brown sugar and pineapple, and reflects tropical fruit and macadamia nuts on the palate. I got a lot of rum essence in the finish. Well Rested is dynamic in a savory way. The nose on Well Rested was bright and fresh like an apple orchard, but the taste was earthy with mushroom and wood, with some minerality to it. You could say that Death in the Afternoon is designed to emulate a daiquiri and that Well Rested is like a margarita or a tequila-inspired cocktail. Both are exciting to drink and layered with flavor.

“It keeps beer-making exciting, and you never know which beer will become the consumer’s favorite.”

Be sure to check out Shades Brewing’s Slurry series, Slushies and Sloshies. Slurry beers are $3.50 to go and $7.50 at the taproom ($4 on Fruity Fridays). Slushies ($8.50) and Sloshies ($12.50-plus, depending on the liquor) are only available at their taproom and a perfect way to temper any hot summer day. As for Proper’s Death in the Afternoon and Well Rested, they are only available while supplies last for $4.99 a can, and can be found at their designated locations.