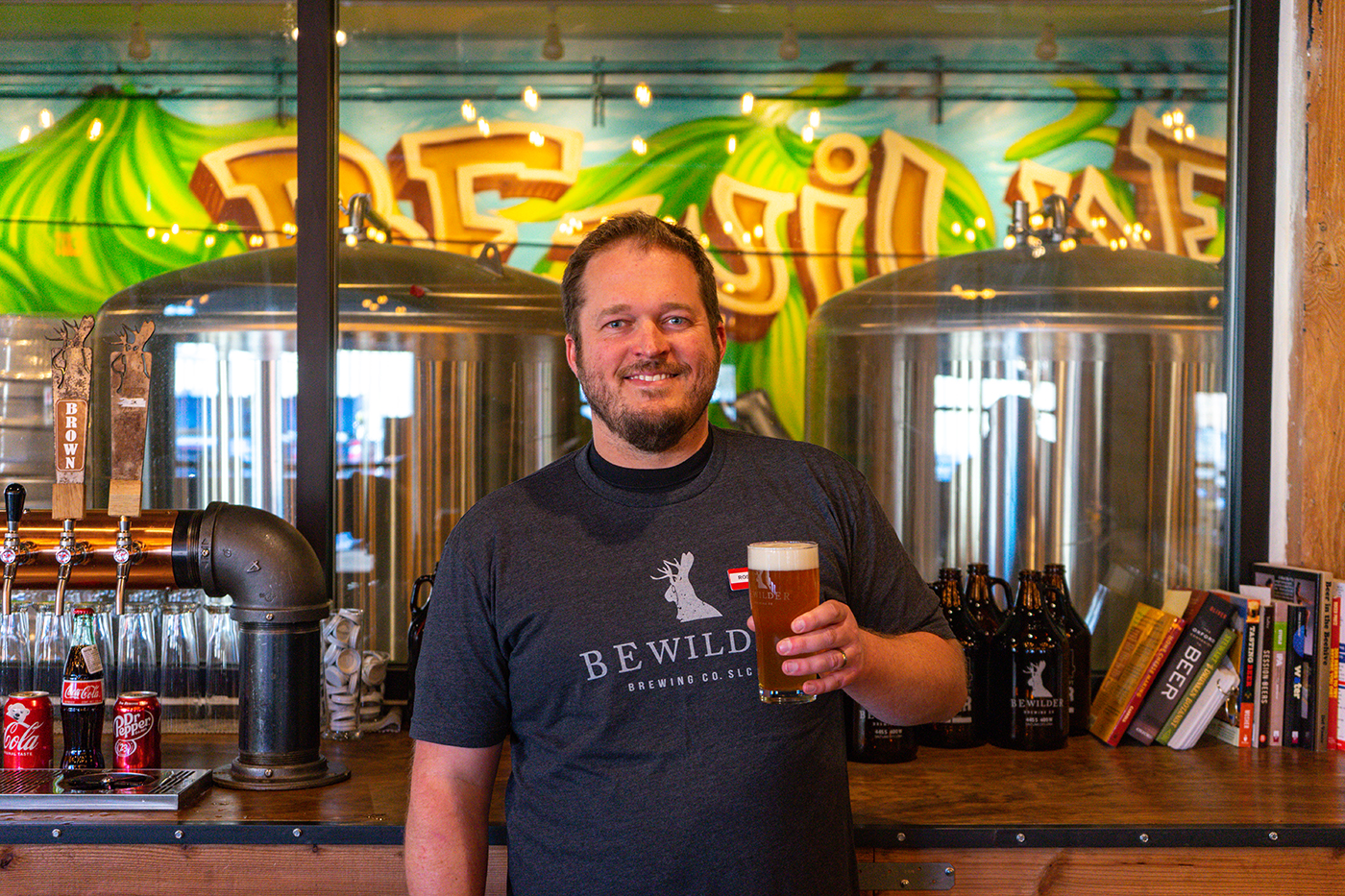 Bewilder Brewing: How One of Salt Lake’s Newest Breweries is Standing Out

Bewilder Brewing is one of the newest Utah breweries providing creative craft beers and clever edible pairings. At the helm are two seasoned beermakers who have weathered more than a few storms, Ross Metzger and Cody McKendrick. The now ubiquitous pivots we’ve all made to adapt to a weird, COVID-19 world are nothing strange to Bewilder Brewing’s founding duo. “Our original business plan was designed to serve people that wanted to hang out in a cool space and have some food and beer,” says Metzger. “That idea was flipped on its head overnight. With people needing to stay home, we had to look into avenues of packaging our beer and food faster than expected.”

Contrary to non-local attributions, most Utahns know by now that our regional craft beer culture has been thriving for years. The growth has, in fact, felt like something of a decade-plus burst of young, innovative brewing operations that can be daunting to keep up with. Among the wave of artisan beer washing over our valley, it can be an ever-increasing challenge to offer new angles to the industry.  Also the founders of Salt City Brew Supply, Metzger and McKendrick found a new edge with Bewilder. After opening a small brick-and-mortar in 2011 to better facilitate an original web forum for selling homebrew supplies, Metzger and McKendrick took cues from some of their brewing customer base to create their own brewery. Now a fresh and new gathering space, Bewilder offers a wide swathe of well-considered cuisine to pair with their seven-plus current craft brews.

Located in the renovated, 120-year-old Western Electric Co. building, Bewilder has found a way to bring new life to old spaces and offer more than just libations and eats. Metzger says the past few years reflected a slowing in the trend of homebrewing, leading him and McKendrick to get creative in order to survive and thrive. “The homebrewing industry has been slowing down nationally for the last four years, so it finally gave us a little time to work on other projects like the brewery,” he says.

“One of our main foci is to produce traditional European beer styles as true to style as we can.”

Bewilder has demarcated their specialties in the local brewery community. “One of our main foci is to produce traditional European beer styles as true to style as we can. Things like English Bitters and German Lagers,” Metzger says. “We want to showcase to people just how diverse the world of beer is.” Bewilder also knows how to bring a specific identity to their beers, which is an important aspect of setting themselves apart. “Much like grapes in winemaking, regional growing conditions impact flavors in grain and hops,” says Metzger. “Using ingredients that come from the region the beer we’re producing hails from will allow us to showcase the beer style in its best form.”

Bewilder exists right in the heart of the city, and Metzger attests to his hopes for how they will thrive in the coming year. “We hope to help expand the walkable and fun Downtown area,” he says. Metzger also says they had several intended growth ideas for Bewilder before social-distancing restrictions: “Overhauling the curbside appeal, adding an outdoor area for dogs and general beautification will be happening over the next several years,” he says. “A cold case with fresh beer to go, a robust barrel-aging program, and a small amount of draft distribution is most likely coming sooner than later.”

“The homebrewing industry has been slowing down nationally for the last four years, so it finally gave us a little time to work on other projects like the brewery.”

Metzger is currently hopeful for the nearer future, inclusive of the events unfolding. “Our extended outdoor seating will likely continue after the restrictions, since it is something we had on our long-term plan anyway,” he says. “It’s hard to say where things are going exactly, but we are giving it all we can to come up with new and creative ways to add value to Bewilder.” Bewilder already offers take-out options for beer and food, an opportune alternative amid the current events of today. Their food shouldn’t be missed either, especially their regional sausages. “They are handmade from scratch, in house, making them as close to what you can get if you were in that country yourself,” Metzger says. “We want to rotate some of our food offerings at the same time as our Beer offerings.”

Bewilder Brewing clearly has a lot to offer our city. The small pleasures offered by places like them (in whatever fashion we can acquire nowadays) feel particularly important as we take things one day at a time for a while. So give your love to the locals, pour yourself a glass of Bewilder beer and raise a toast to “the little guys” of our city’s wonderful, small businesses helping make life a little bit more bright. Visit bewilderbrewing.com to learn more.