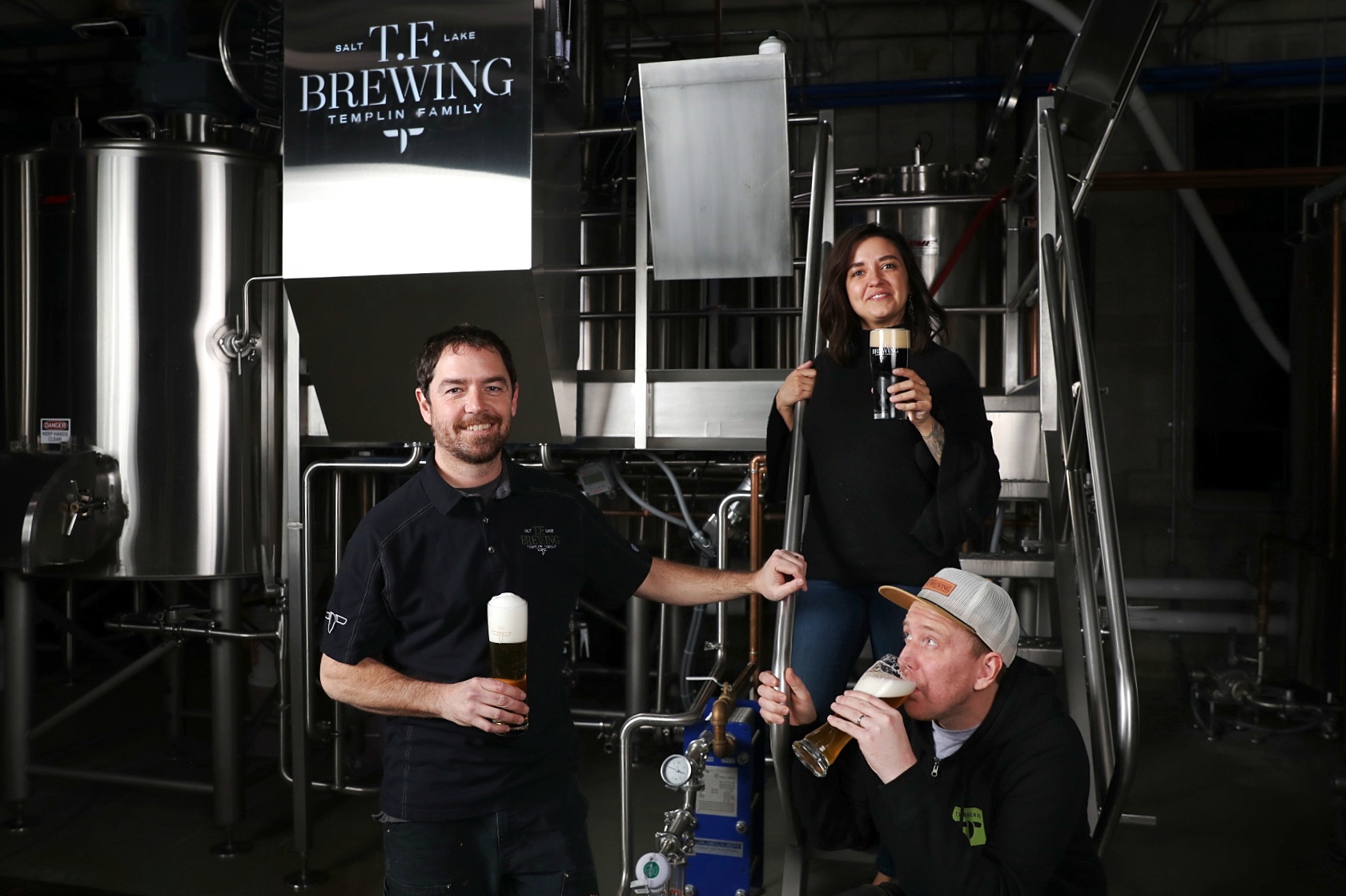 Walking into Templin Family Brewing (T.F. Brewing) feels like walking into an old friend’s living room with your buddies behind the bar, ready to slide a frosty cold one across the bartop to quench your thirst after a long day. The floor of the bar is filled with rows of long, wooden biergarten tables. Different characters sit side by side talking, playing games and getting to know each other. A separate area is on the left side of the bar where one can sit on large, puffy couches that face a flat-screen TV that, at the time of my visit, was showing a hockey game. From any point of the bar, your eye can catch the meticulously clean and glimmering sight of the brewery. The distinct sets of brewing equipment “plants” stand tall, like trophies that the T.F. Brewing family team has certainly earned.

Kevin Templin, co-owner and Brewer of T.F. Brewing, based almost all elements of the bar and brewery—from the environment to the beer to the day-to-day inner workings of the brewery—on traditional German methods. “You never go into a German brewery and see it messy and unorganized—it is almost church-like,” he says. Kevin reiterates that you can taste the attention to detail and cleanliness of the brewery in the beer, which is one of the things that attracts him to these methods and attracts customers to their beer.

“German Lagers will always be our flagship beer,” Kevin says. However, T.F. Brewing offers a large variety of other beers. He says, “We do a ton of ales, we do a lot of barrel aging, IPAs, but where my heart is? German lagers.” As much as Kevin enjoys brewing and serving German lagers, however, “It is difficult to produce a lot of lager beers and keep them on draft because of the fermentation process,” Kevin says. This is clearer as we learn that primary fermentation takes two weeks and the lager process takes 28 days, making it a challenge to produce large amounts of lagers. As a form of respect toward the brewing process and his customers, Kevin won’t compromise the quality of the lager to produce more. He staunchly believes in quality over quantity. In a world where almost everything is mass-produced and half-assed, this is a valuable and refreshing tenet that Kevin holds.

“Templin Family isn’t just blood; it’s all our friends, all of the brewmasters we’ve met, the managers—everyone is part of the Templin family.”

Separate from Kevin’s affinity for German lagers, their most popular beer currently is the Ferda Imperial IPA at 8.2 percent in a 16-ounce can. Recently reviewed as SLUG’s  January “Beer of the Month” by beloved beer writers Chris and Sylvia Hollands, the Ferda Imperial IPA touts its hoppy flavor with an additional citrus taste. Of the range of beers Kevin creates, he says, “A guy that owns a donut shop who loves glazed can’t just sell glazed donuts; you have to sell chocolate.” Their chocolate is definitely the Ferda IPA, as it’s everyone’s favorite. This speaks to Kevin’s talent for creating stellar beers across the spectrum.

Kevin’s wife, Britt Porter-Templin, is the co-owner and runs the accounting and management (the brewhouse mom). His brother Chris Templin runs the canning and is a bartender. The brewery is heavily focused on the element of family. Kevin says, “Templin Family isn’t just blood; it’s all our friends, all of the brewmasters we’ve met, the managers—everyone is part of the Templin family.” This includes Jaron Anderson, who brews with Kevin, Brittany Watts who manages the bar and Rita Behles, who works hard every day to learn more from Kevin and Anderson to become a brewmaster in her own right. This is reasonably the inspiration for the name of the brewery. “To me, all my favorite breweries in the world are all traditional family names,” Kevin says.

The staff doesn’t only comprise family—Kevin strives to make the environment feel like home. Every Wednesday, their “game guy,” Garrett Miller, comes in with 100 different games and encourages strangers to interact and play with each other. This is where the long biergarten tables come into play. Kevin loves how, in Europe—specifically in Germany—complete strangers can sit down and just get to know each other over a lager. He aspires for that dynamic in his bar.

A few beers that the Templin team is “brewing” up are the Squirrel—a New England–style IPA that’s more of a juicy, hazy beer—and the exciting and innovative Terpene IPA, which has terpene oils extracted from cannabis. What is exciting about this beer is its progressive inclusion of cannabis, which normalizes the use of the substance in creative ways such as in brewing recipes. Cannabis also happens to complement hop aromas beautifully, making for a scrumptious beer. Their Dunkel Lager is a dark Bavarian beer that drinks soft and bready, which will be released in early April. The Schwartz beer is a German black lager that will also come out around that time.

Templin distributes their Keller (German-style unfiltered pilsner) and Ethereal Leichte Weisse beers at 30 Smith’s, Harmons and 7-Eleven locations throughout the state of Utah. Additionally, they carry their Ferda 4-percent beer at every liquor store around the state. Kevin says, “It is Ferda boys, Ferda girls, Ferda people.” To keep up with Templin Family Brewing, stay updated via their website for more information.